I've been getting a bit tired of constantly cleaning sediment out of my float chambers recently. I did read that this can be an issue caused by the ethanol that the petrol companies are allowed to put in fuel (5% currently). Apparently because ethanol is a stronger solvent than normal petrol it can loosen deposits that have built up in the fuel system over time, deposits that were stable with plain petrol in the system can be loosened by the ethanol and cause sediment. Things will get worse soon as the government are relaxing the rules in line with an EU directive and allowing up to 10% ethanol in fuels in the near future. Another issue is that the old rubber fuel lines in our classic cars are not ethanol resistant and tend to break down, crack and leak much more quickly than they used to with "proper" fuel.

I've always had a fuel filter fitted befor the fuel pump and the pump itself has a built in filter, however bits of sediment have still been arriving in the carburettor float bowls which can block jets, or cause leaks as the float needle valve can fail to seal if it gets a bit of sediment in it. I've got copper fuel pipes fitted so it's not internally rusty fuel lines between the pump filter and the carbs which can be a problem and I'd hope the two existing filters would be able to catch any internal rust above the fuel level that has formed inside the tank that makes its way into the system.

Anyway in an attempt to reduce the issue I've fitted yet another fuel filter just before the carbs along with some new rubber pipes that are supposed to be suitable for the latest unleaded fuel. 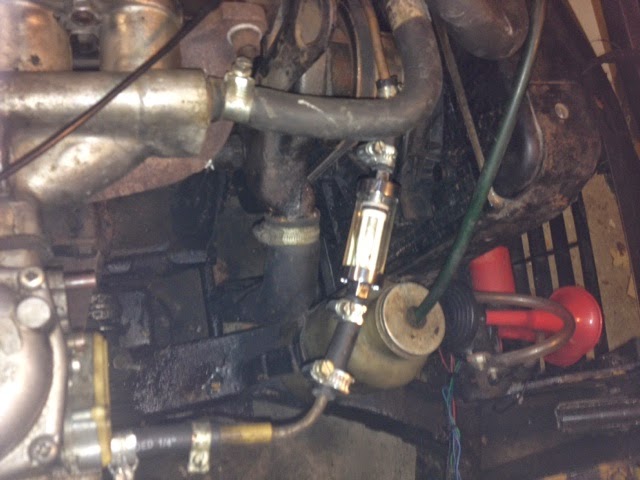