Back on the Road and Nice photos!

I've fixed all the mechanical damage from our "incident" on the Round Britain run, tie rod arm replaced with new assembly, handbrake reattached, Exhaust fixed, Bonnet re-aligned (reasonably well anyway), dent in the wheelarch fettled. I also took the car in for a 4 wheel alignment, good news is that nothing is bent or twisted chassis wise and the garage was able to adjust everything to within tolerance. I have found another dent, but this is in the floorpan (just in front of the tie rod mounting) so I won't worry about that too much. Still need to get the rear valence replaced, the small dents in the quarter valences filled and painted. 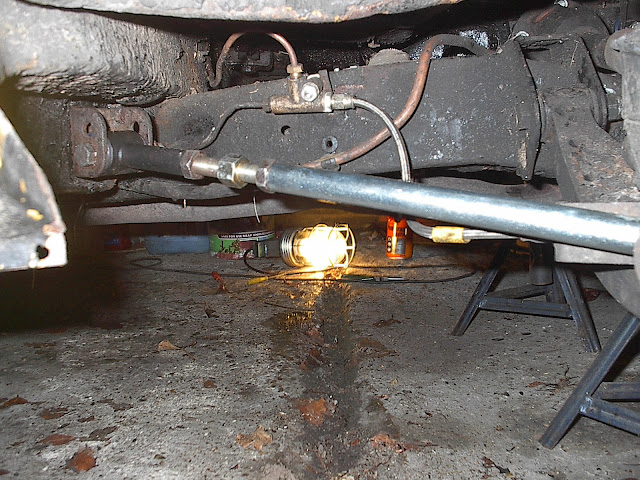 Dent in the Rear Valance, panel to be replaced.... 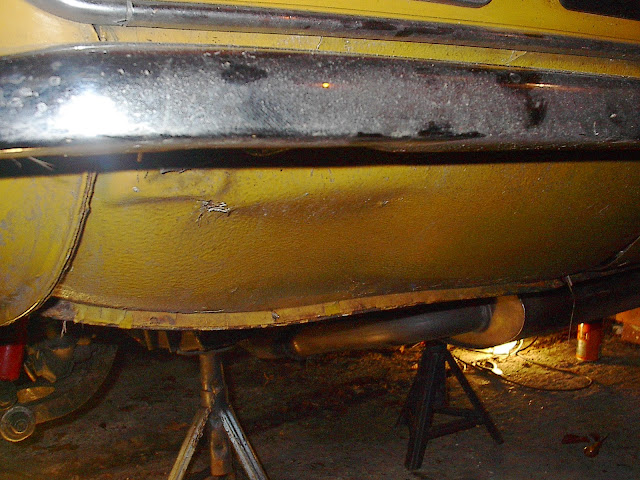 I've still not received the magazine or photo copies promised by the journalist from the practical classics article despite chasing this up. However, the article had the name of the freelance photographer, Mark Fagelson. I googled Mark and sent him an email politely asking if he could send me some photos. Mark duly obliged and sent me a disc with a copy of the photos in the next post, so he's a jolly nice bloke as well as a damn good photographer!

There were quite a few really good pictures that hadn't been published as well. Mark included a letter regarding copyright and I'm allowed to use the photo's for my own personal use including publishing on the interweb as long as it's not for profit so here are 3 of my favourite photos from the shoot. 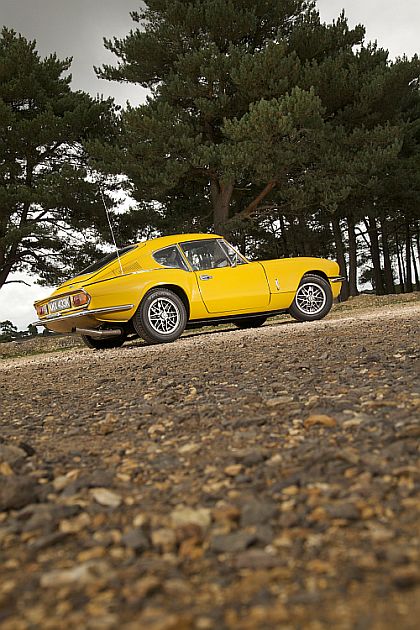 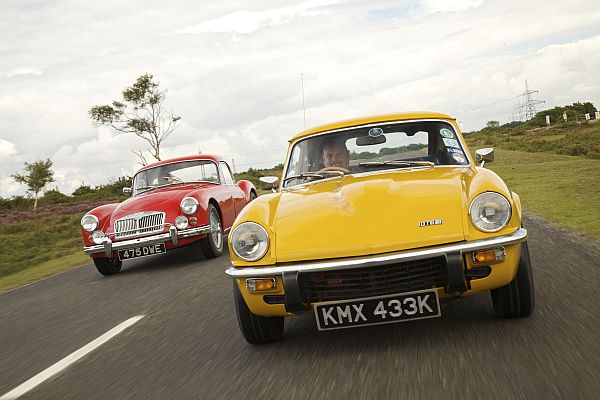 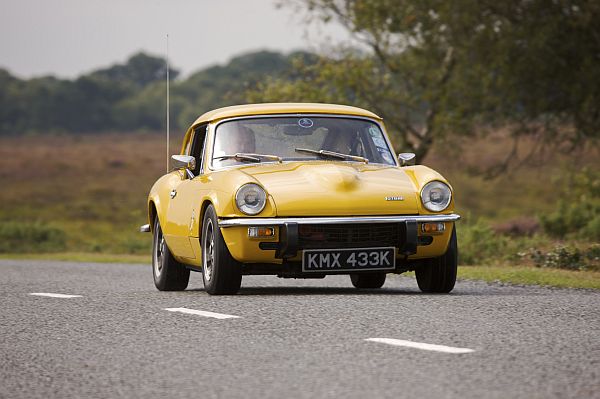 It's been a strange week!

After the damage from the Stag avoidance off road antics on the round Britain run at the weekend the GT6 is now featured in an article in the November issue of Practical Classics magazine that came out this week.


Some excellent pictures of the car looking in really fine fettle. The article it's self is pretty generic regarding GT6s rather than specific to may car. In the 3 way road test against the MGA and the Sunbeam Alpine they liked the Alpine best but did admit that the GT6 sounded more "sophisticated" but was the noisiest of the bunch. That'll be the fact that I have a sports exhaust and the others were boring standard ones then!


Probably best that I don't publish the actual article on my blog but the picture below was extracted from Practical Classics website so is already in the public domain. The article doesn't really say much that I haven't heard before regarding GT6s but I must admit the photos are excellent, especially the action shots, there's one action shot that clearly shows me behind the wheel, my 15 minutes of fame I guess!
Posted by Andy Cook at 23:33 No comments:

An Eventful Round Britain Run for Team 30

Well what an eventful weekend, unlucky but lucky at the same time. Our Round Britain Run came to an abrupt end at John O'Groats yesterday morning following an incident that had happened a few hours previously in the early hours. A Stag ran out in front of us on the A9 in the Highlands (Just South of Aviemore) at about 4am. Mark swerved and avoided the beast but the car spun off the road doing a couple of 360s and came to a halt against a grass bank. Doug  & Katie Foreman and another crew stopped to help. I managed to get the car out of the boggy mud and back to the road and drove it along about ¼ mile to a layby, the car was very unstable at the back end and the rear nearside wheel was at a very funny angle. Jacked it up and found that a rear tie bar was badly bent downwards. Managed to straighten it out a bit with the trolley Jack. Tried the car and it didn’t feel too bad so drove on to the next control point at Skiach Services, refueled and then carried on to John O'Groats. On the way the car started making a knocking sound on left hand bends so  after Breakfast in the John O’Groats Seaview Hotel we jacked the car up investigated more in the daylight. We noticed that the tie rod was still a bit bent but couldn’t see much else wrong (except the handbrake cable had come un attached). I tried to straighten the tie rod properly but it snapped. That meant it was game over for us so we had to be recovered by the AA. It took over 24 hours and 4 relay trucks to get us home but that did include a night in a hotel near Warrington paid for by the AA. The car also has some dents, a dented and split rear valance, a dented front quarter valence and a dent in the return flange of the front wheelarch. We realise we were lucky though, the Stag was darn big and would have written the car off if we'd hit it. Also we saw that stretch of the A9 in the daylight from the breakdown truck on the way back and there are loads of nasty drops and sheer rock faces along the rod side so we were lucky it happened exactly where it did.
I think Mark should have drunk more Lucozade looking at the following advert (which features a GT6 and a Stag or two!)


The GT6 at the Start, the Plough, Enfield 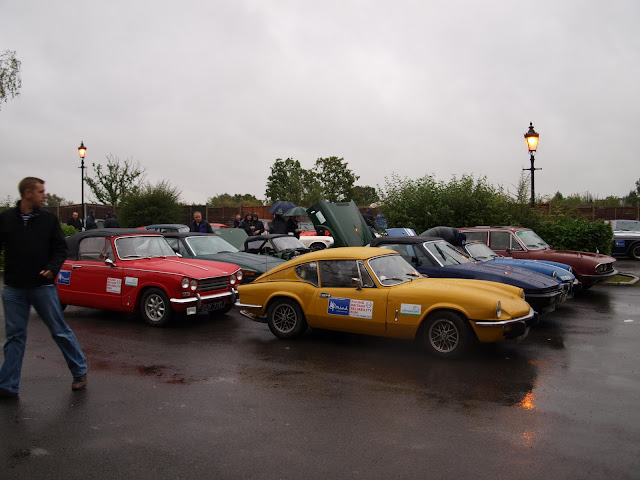 More Cars at the Start 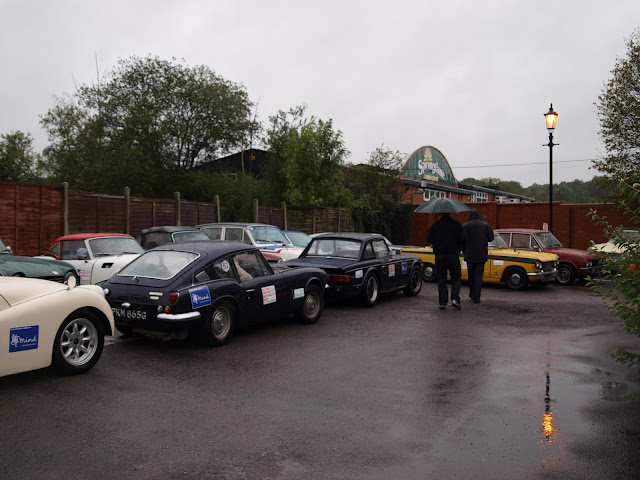 Bodders Changes a Wheel Bearing at the Start 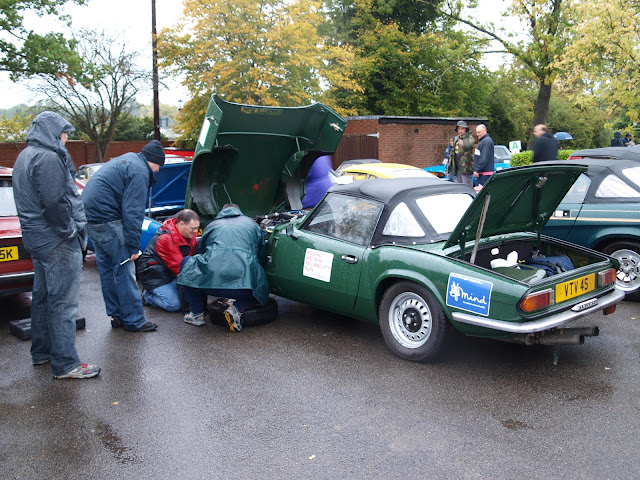 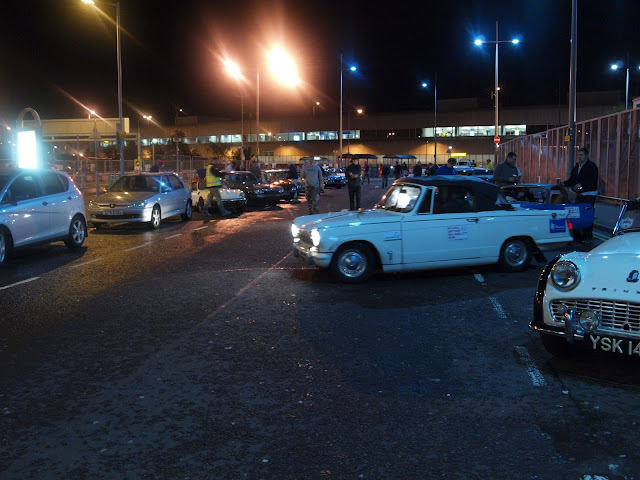 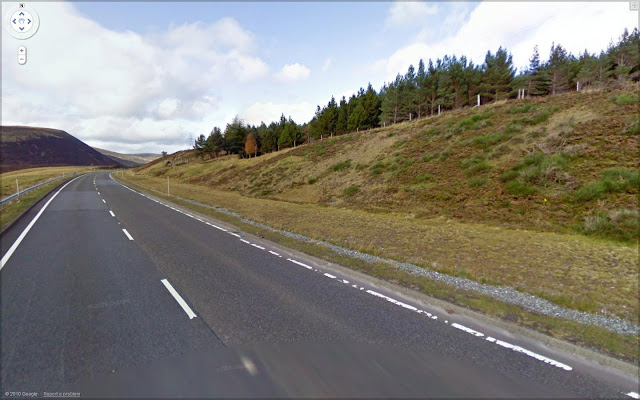 We made it to John O'Groats 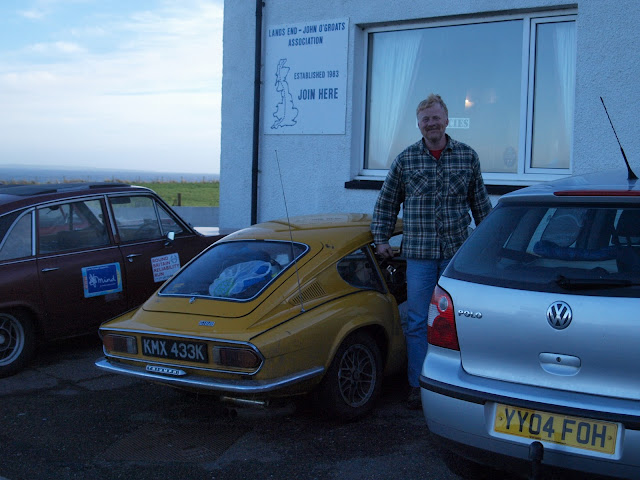 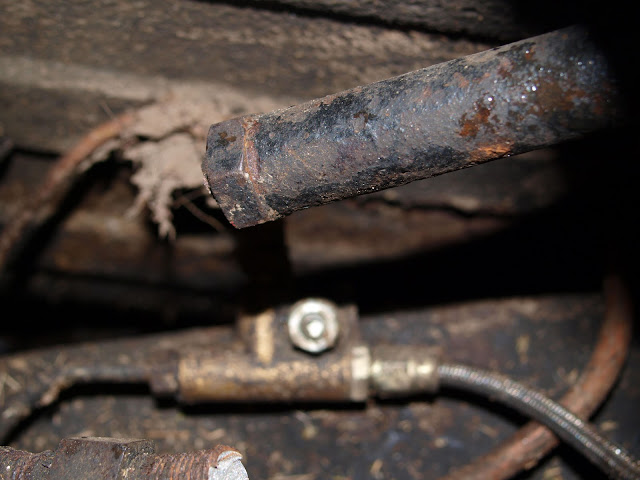 The end of our Round Britain Run 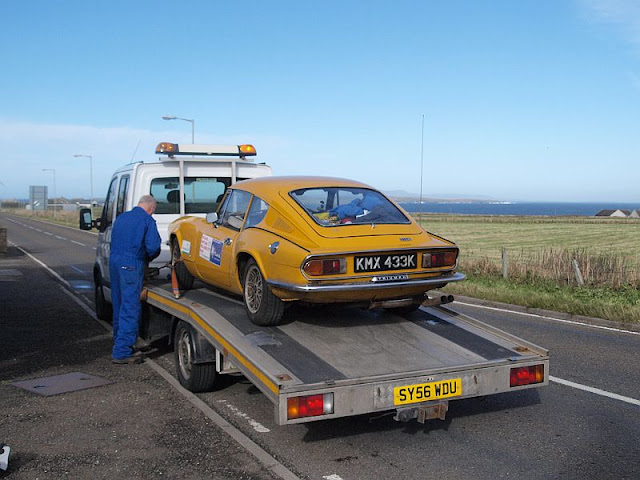 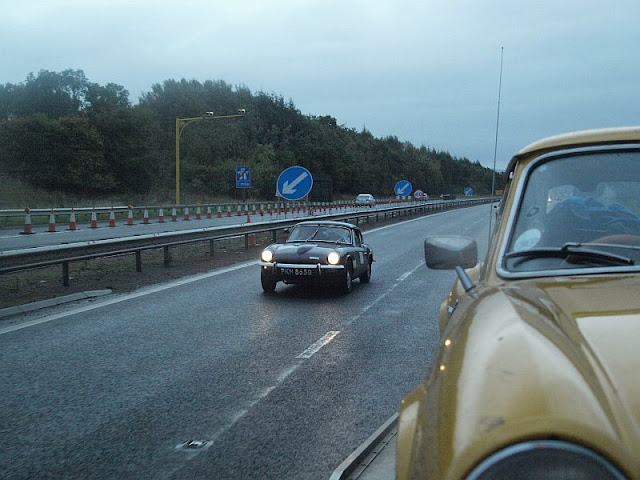