One step forward two steps back !

Part way through putting the GT6 back together I decided to start it up as it hadn’t been run for a week or so but found the battery was KO’d. I thought that the battery was only a couple of years old and it was a high quality Bosch one so thought I’d dig out the receipt and take it back under warranty. When I found the receipt it turned out it was actually just under 4 years since I bought it. I wasn’t sure whether it had a 3, 4 or 5 year warranty and couldn’t find any paper work or signs on the battery to give any clues. So I went back to Costco the cash & carry where I bought it, the good news was it had a 4 year warranty, the bad news was they wouldn’t do an exchange but were happy to give a refund so having been refunded off I went to their tyre and battery dept to get a new one. Battery’s have gone up a lot in the last 4 years, the last one cost me £32 from Costco, the new one was £56 but having checked out Halfords the same Bosch battery is £104 so I’m reasonably happy.


I got home put the new battery in and started the car up no problems. I then finished putting it back together and bled the brakes etc. Then went to start the car out to take it for a test run and found that the starter was KO’d! So now I need a new starter, maybe it was on the way out and that killed the old battery. Ideally I’d change it for a high torque starter conversion but I’m in a hurry and can get a good old reconditioned Lucas LR101 locally tomorrow
All being well the car will be back in one price by tomorrow night ready to take back to the MOT centre for some welding and a re-test….
Posted by Andy Cook at 23:33 No comments:

It's been a long time since my GT6 had any problems passing the MOT, 2001 was the last time I had a MOT failure so I was probably about due for another one!

One of the rear wheel bearings had excess play, the brake pipe across the rear of the chassis had signs of corrosion and there were 3 areas of corrosion underneath. The most serious being a hole about 1 inch x 1/2 inch that the tester managed to poke in a front out rigger. The other two are pretty minor a very small split in the passenger floor pan near a seat mounting and a small split at the edge of the boot floor. The last two are not in a particularly structural position but were within 30cm of a load bearing area so are a failure under the MOT regulations.

I'll get the corrosion plated by the MOT place just to get a quick pass.

I took the halfshaft out last night and rebuilt it tonight with a new bearing and a new genuine metalastik rotoflex coupling that I was lucky to pick up cheap on ebay. It's been a long time since I've done a wheel bearing on the GT6, I did have a stock of shims and spacers for setting up the end float but I can't find them anywhere in my Aladdin’s Cave of a Garage. Luckily though the existing spacer was the right size to give about 1 thou of end float which is within tolerance. I remember last time I replaced a bearing I had trouble getting the outer bearing off the hub as it disintegrated leaving the inner race in place. So this time around I treated myself to a bearing splitter tool, that certainly makes the job nice and easy. 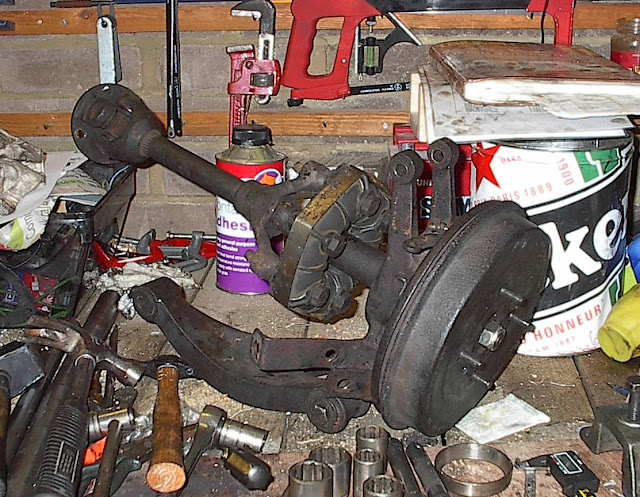 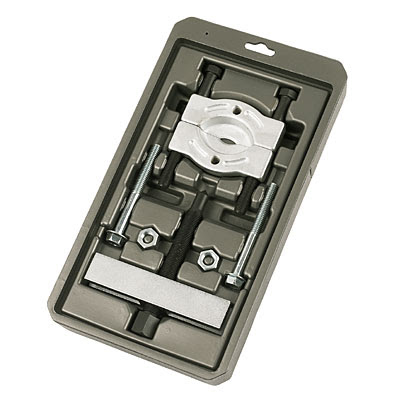 So just need to change the brake pipe and put the halfshaft back in, I can then book the car in to get the corrosion plated and the car retested. I always take my car to a place that does free retests on principle, however they have now reduced their free retest time limit from 14 to 7 days and I'll probably miss the 7 day cut off which means I'll have to pay for the retest which is a pain....
Posted by Andy Cook at 23:55 No comments: