It's been a bit of a lonely journey when I've used the "Flying Log" for work recently as it had no radio fitted. I have a nice Pioneer Media Player with full ipod/iphone control coming for Christmas but as a temporary fix I've found an old Phillips Radio Cassette Player I used to have fitted to the GT6. So I now have "Log Music" available.  Not that I have much in the way of cassettes anymore in this CD/MP3/iTunes  age but at least it's got a decent radio. The other good thing it's an ISO fitting so in installing it I've got all the connections and hardware in place ready for an easy swap to my new media player on Christmas day :-) .

I finished off the installation with a pair of Radiomobile 3 way POD type speakers that look pretty retro and in keeping with the car. 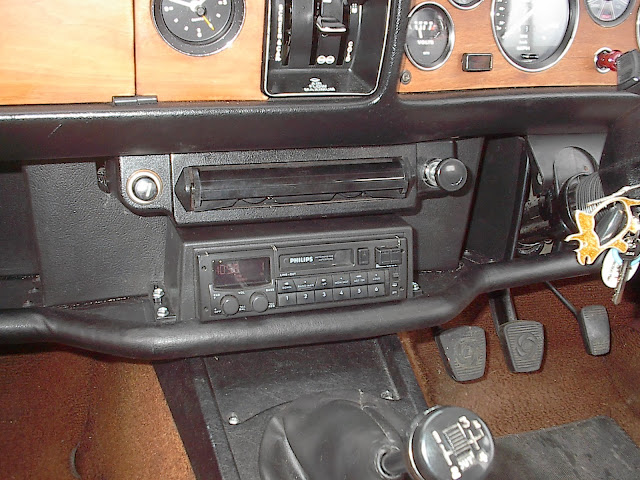 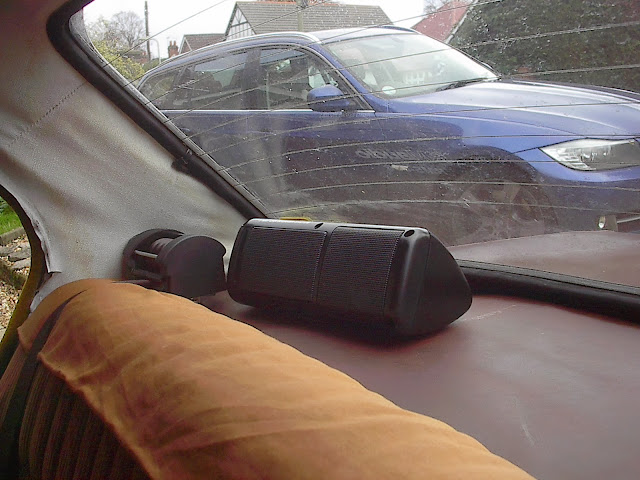 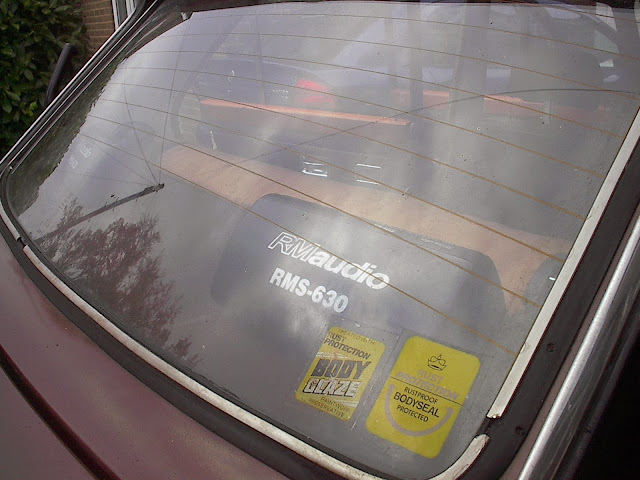 The other important bit of news about the "Flying Log" is that my entry went in the post for the Club Triumph Round Britain Run last night. the intention is to use the Dolomite, Paul "Bodders" Bodiam is co- driving for "Team Log". This time around the charity being supported is Macmillan Cancer Support so I'll be on the scrounge for sponsorship nearer the time next year...
Posted by Andy Cook at 14:04 No comments:

Dolly Front Parcel shelf back in

My refurbished Parcel Shelf under the Dashboard is now back in the Dolomite and looking good. I've got a modern ISO type Radio mount/shroud in place as well ready for fitting a Radio CD player in due course. needs hovering as a load of dust fell out from under the dash when I was manoeuvring it into place... I'm well happy with the professional looking job I've made of it though.. 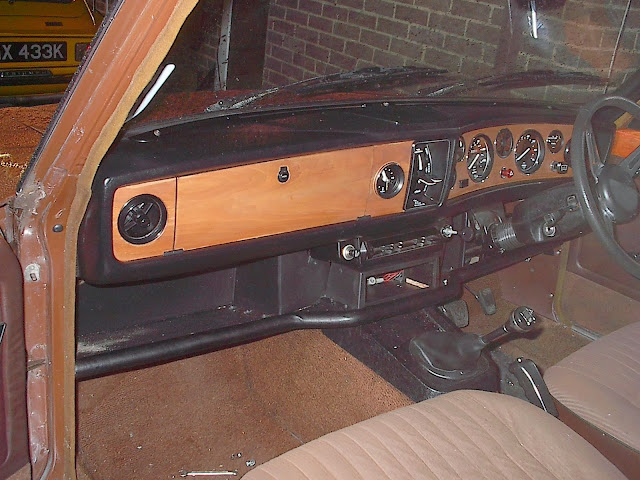 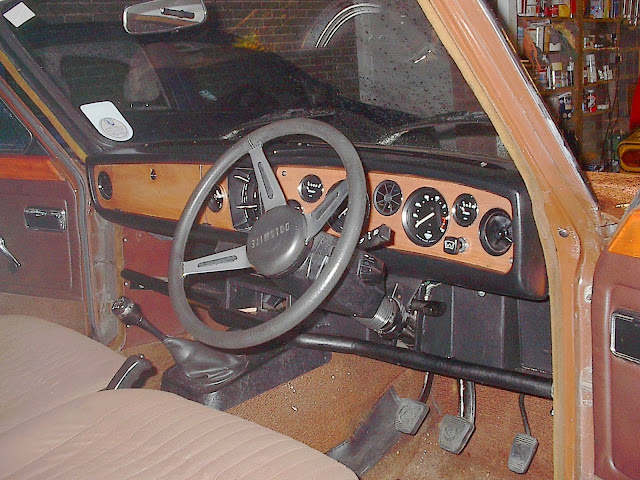 The previous owner of the "Flying Log" had replaced the front parcel with one from a Triumph 1300 which is different than the original and not a brilliant fit. He did supply me with the original Dolomite one though which had a warped and split shelf section and damaged front trim strip. It also had a bodged repair with some sheet metal holding it together. 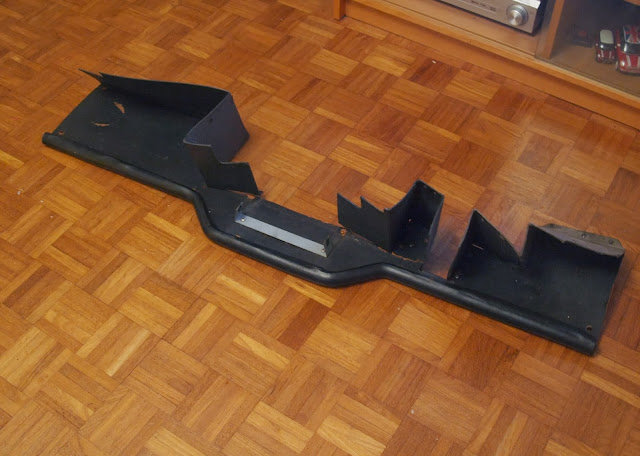 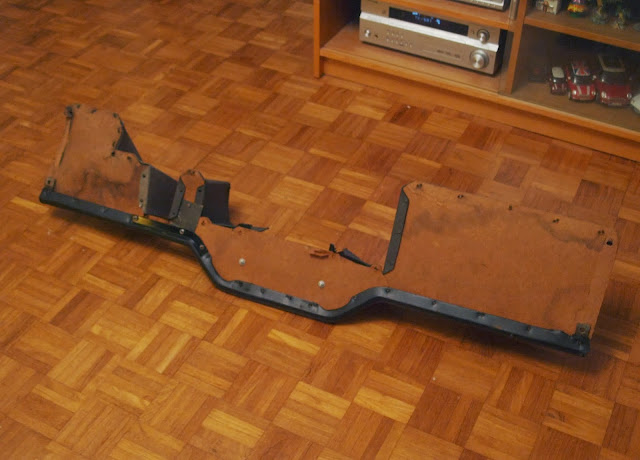 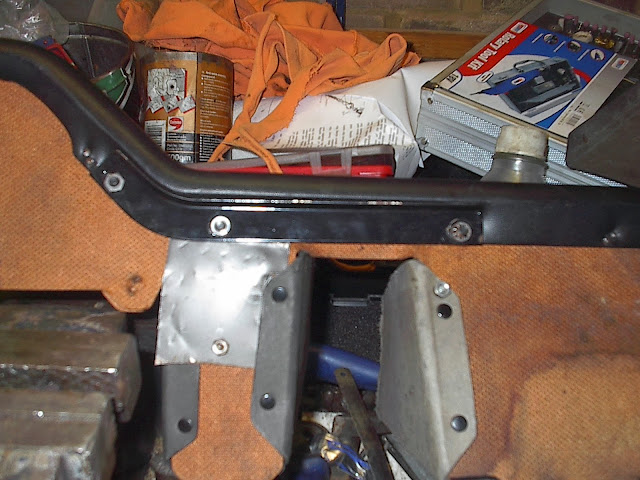 The split shelf was made of textured black hardboard so I decided to make a new one out of hardboard and paint matt black. The front trim strip just needed recovering in black vinyl leathercloth. Fortunately the upright back portions of the parcel shelf which are made of mill board were solid just a bit scuffed so I decided to take the assembly apart and rebuild it.

First thing to do was remove the rivets and take the assembly apart. I used a hacksaw blade to cut through the rivets. 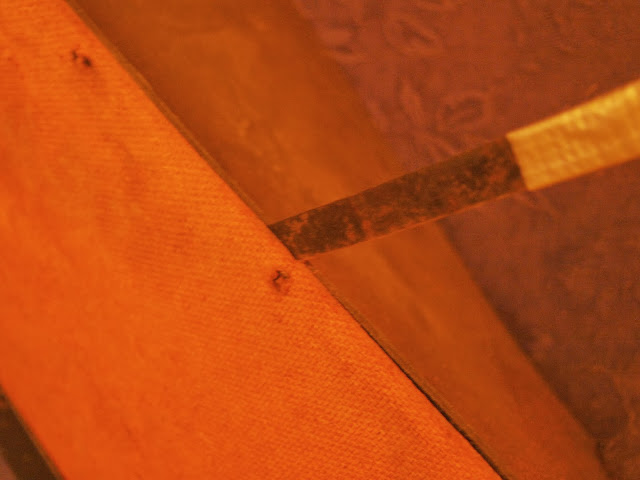 Having removed the rivets I lay the old shelf which had disintegrated into  3 pieces on top of some fresh hardboard and marked out the shape. 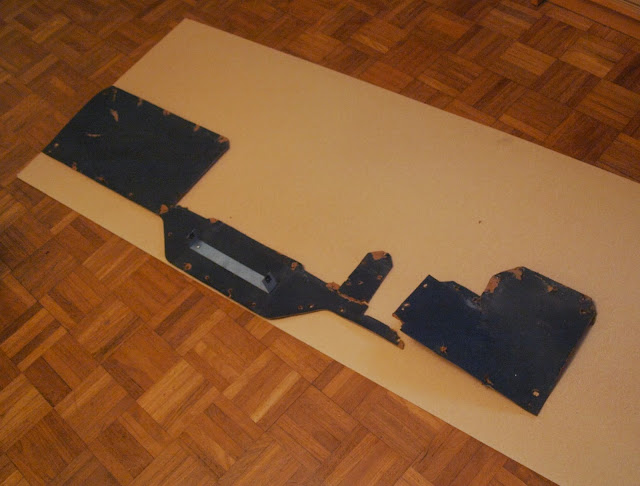 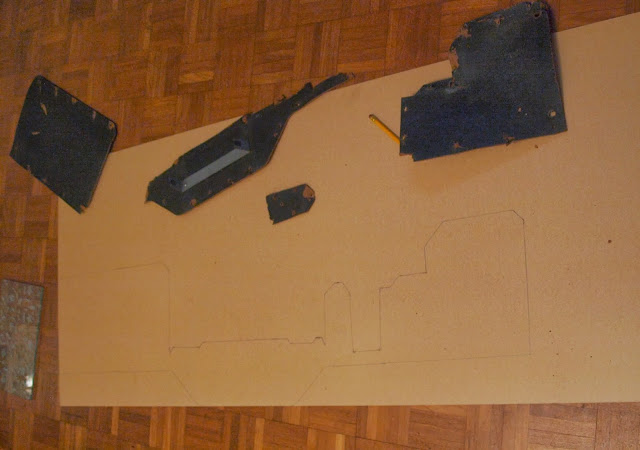 It was then a case of cutting a new shelf out with a jigsaw and drilling the various holes for rivets and fixings. I used the front trim and the upright back pieces as templates to ensure I got the holes in the right place. 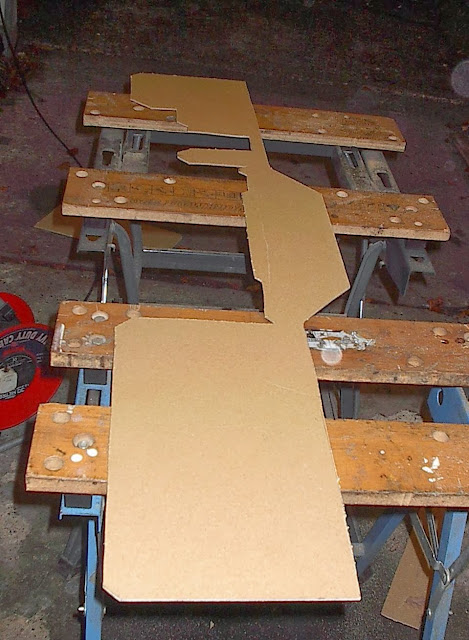 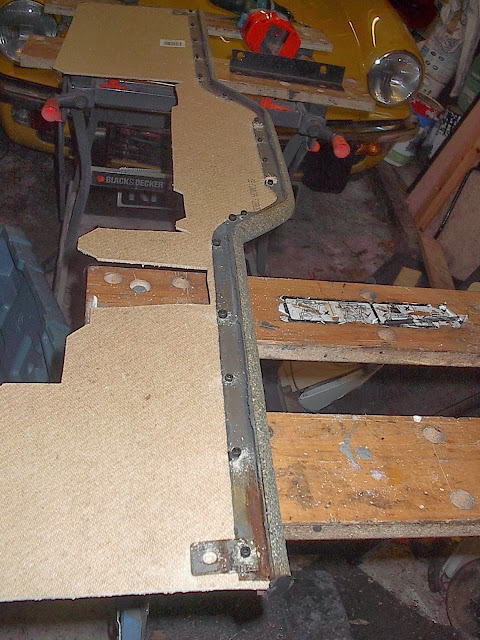 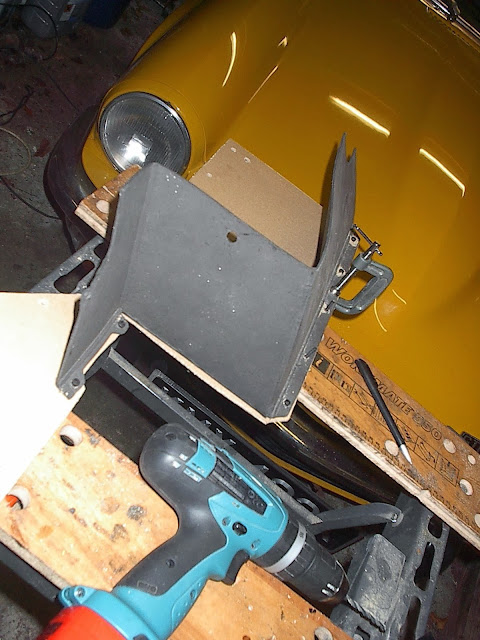 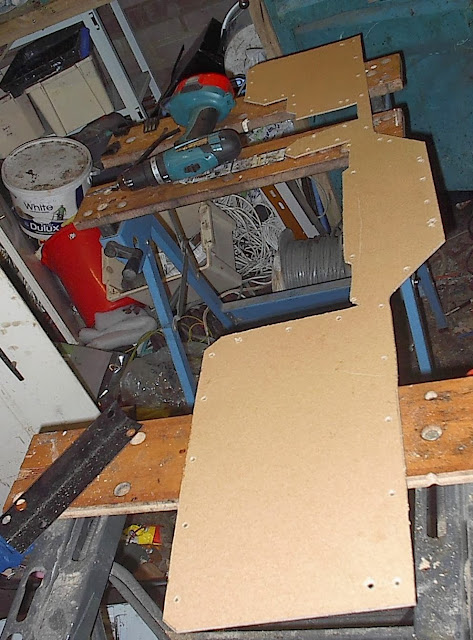 I then painted the shelf in 2 coats of Matt Black paint. I also freshened up the rear upright millboard pieces by giving them a coat of matt black paint. 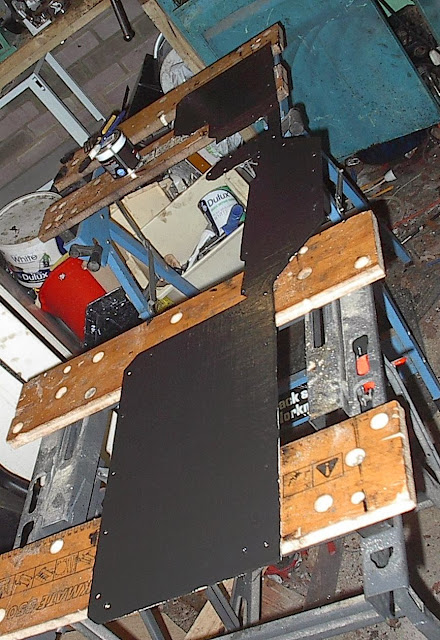 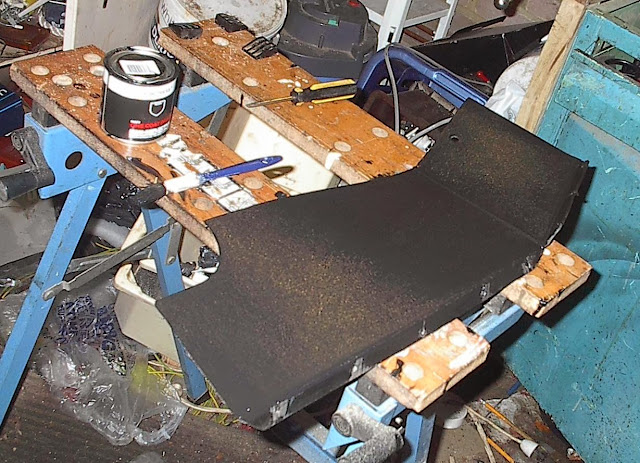 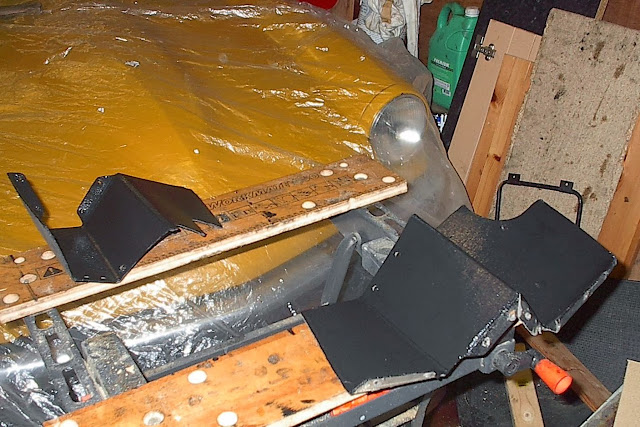 After the paint had dried I assembled the shelf and rear uprights, I used hex cap headed screws where fixings would be visible from inside the car and pop rivets at the rear where it wouldn't be visible. 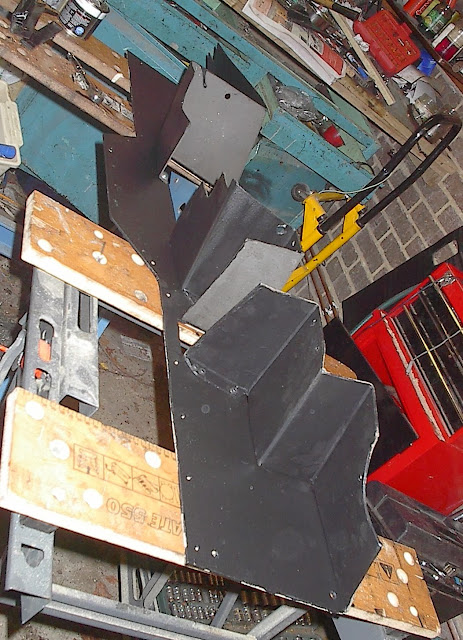 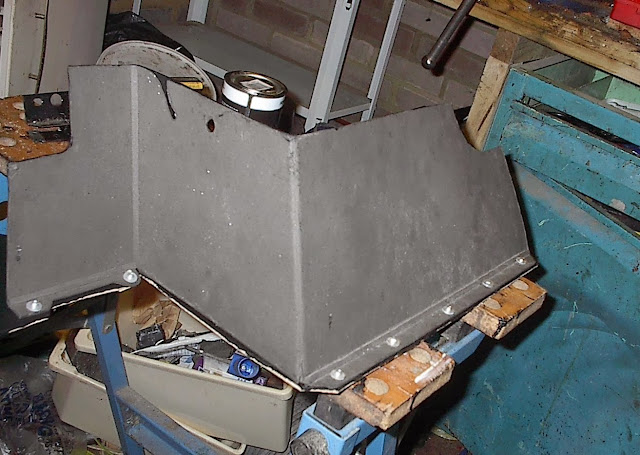 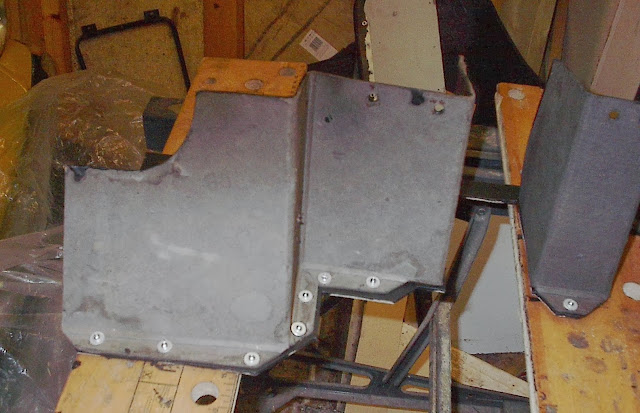 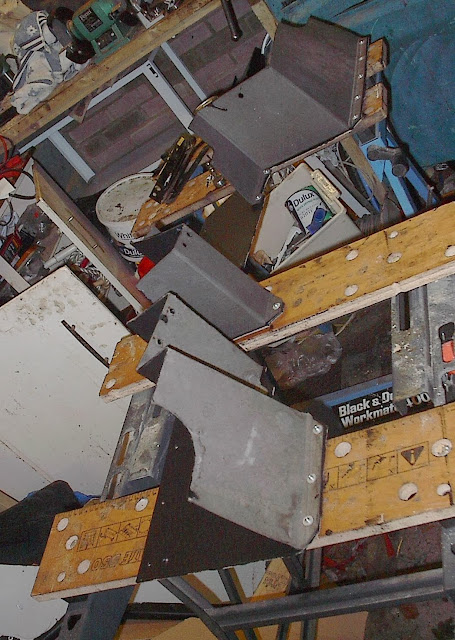 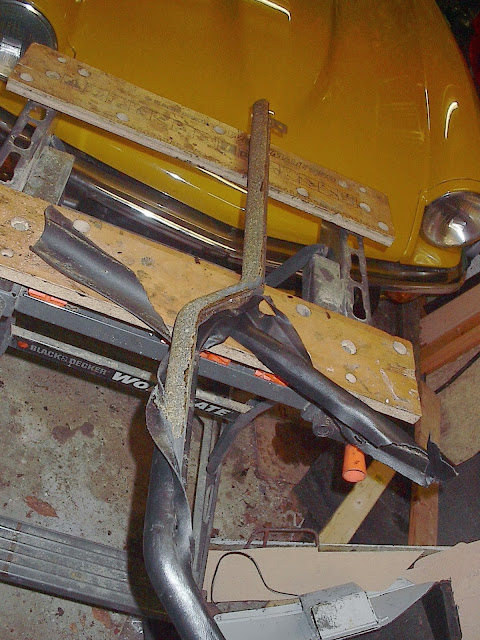 I cut a strip of Vinyl Leathercloth and fixed it along one edge with impact "Evostick" type adhesive. I pegged it in place and allowed the glue to dry fully. 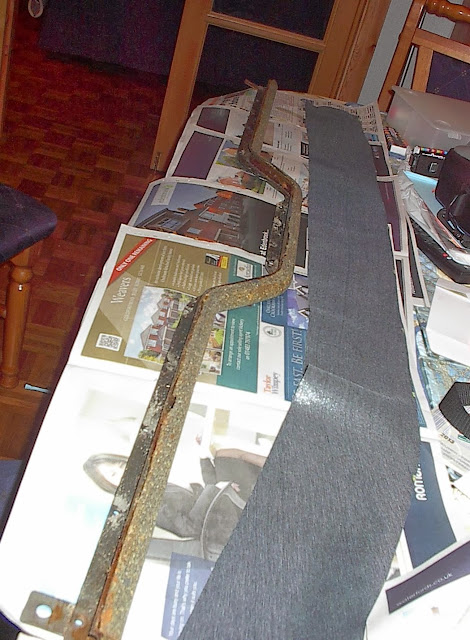 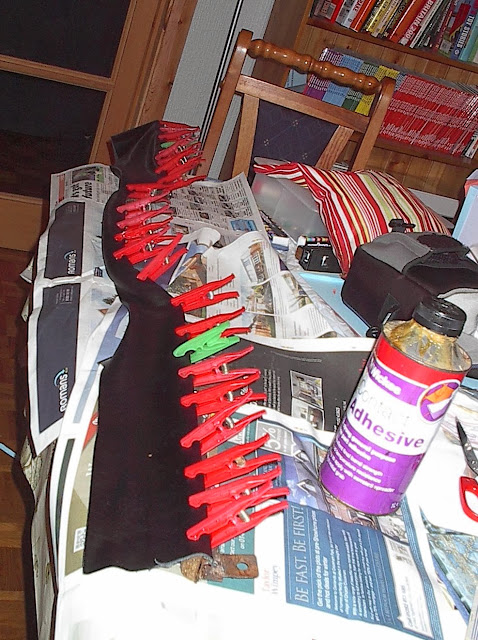 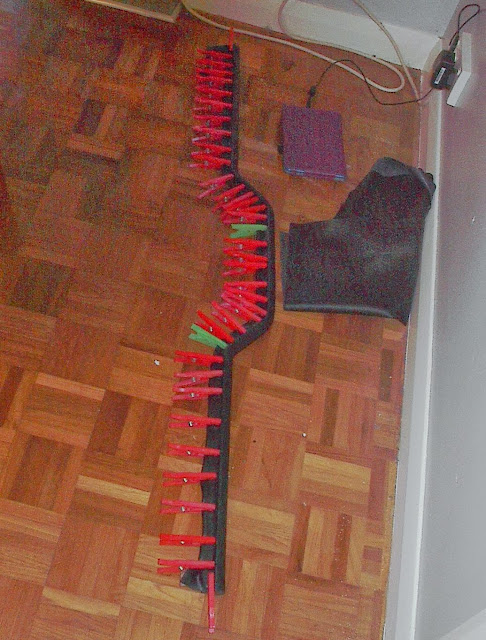 Then I timed off the excess Vinyl leathercloth with a scalpel. 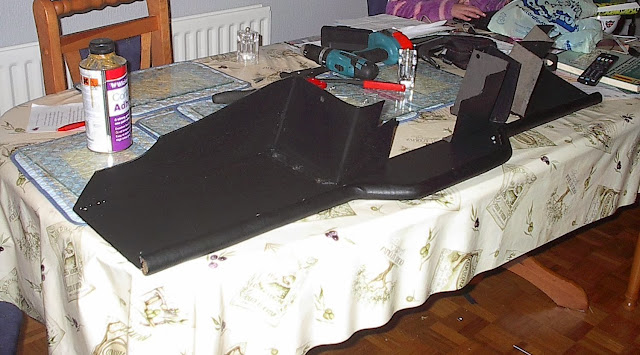 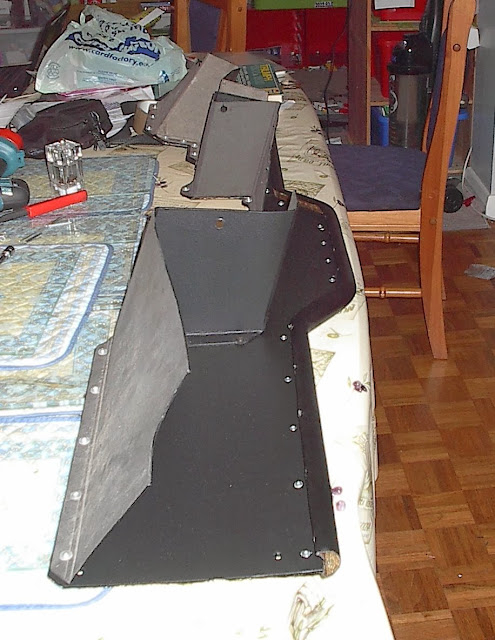 Finally I trimmed the ends of the bar. 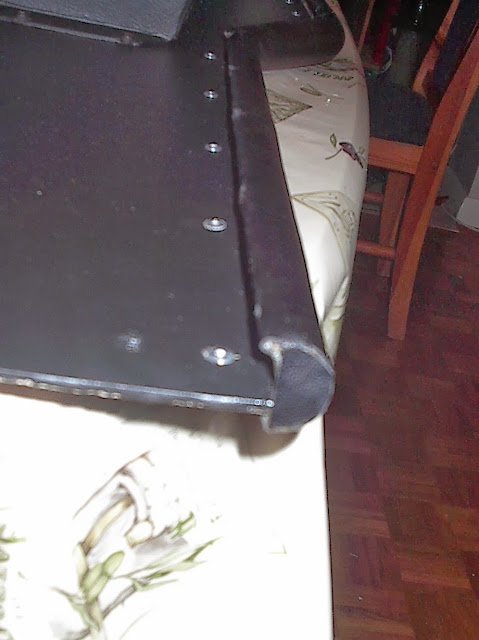 Before fitting to the car I'll be fitting a radio housing that I've ordered on ebay to allow a modern DIN type radio CD player to be added. But I'm pleased with the progress so far.

The other jobs I did this weekend was a change of Gearbox and Engine Oil. The previous owner advised me that he had used a 50/50 mix of EP gearbox oil and 20/50 Engine Oil in the gearbox as he reckoned this was better than plain Gearbox oil for an overdrive box. I'm not convinced so I drained this a refilled with fresh EP80 as I understand that from empty EP80 should be used with EP90 for top ups.

I also changed the engine oil for some good quality Valvoline VR1 20/50 oil and a new oil filter.
Posted by Andy Cook at 21:49 1 comment: