The GT6 now has a full MOT again, unfortunately it had gone past the 10 working days now strictly enforced by the VOSA for re-tests and had to have a full test again. To their credit Moonface where I had it done did say they tried to buck the system and put it through as a re-test but now it's all computerised and locked down by VOSA  they were unable to get around a full test on the system.  Anyway all passed now that's the main thing. By the way has anyone else had one of the new style MOT certificates? They are just printed on normal paper now and are black and white, on the minus side dead easy to forge but then it's the VOSA database records that matter nowadays and you can check validity on line so less of an issue, on the plus side if you are a buyer, it lists advisories picked up in the test.

On the way to the MOT I was a bit peed off as the clicking from the rear axle was still there, I thought I had identified it as a wheel balance weight hitting the wishbone bush shroud but having removed the weight it was still there. It was however only really apparent on right hand bends...

Anyway I investigated again and sure enough it is related to the outer wishbone bush shroud but what it was actually fouling on is the inside of the wheel rim. I'm surprised just how much run out there is on the inside of the rim on my Cosmic alloys, I guess it doesn't matter as long as the outside of the rim is true which it is but the run out was causing the wheel to foul very slightly at one point per revolution but only when the suspension is compressed under load going around a bend. This seems a bit strange as I can't work out how the relationship between the wheel rim and the outer wishbone bush should change, I can only assume that there is a slight amount of flex under load. Under no load the wheel didn't foul however the gap was extremely small, probably less than 10 thou.

I decided to swap rear wheels in case this was the issue, both had been off the car last week and they may have swapped sides. To my surprise I found that the run out on the other wheel was worse and it fouled at the same point even under no load. Strange there is no issue the other side although having checked clearance is again minimal.

So I was faced with 2 choices, firstly to add a wheel spacer, something I'm reluctant to do without longer wheel studs, or secondly to dress back the wishbone bush shroud which is what I've done. I may well get some longer studs and spacers of about 10mm later but for the time being all is well again. Picture below shows where the issue was and if you look carefully you'll see that the wishbone bush shroud has been flattened slightly to avoid fouling the wheel rim. 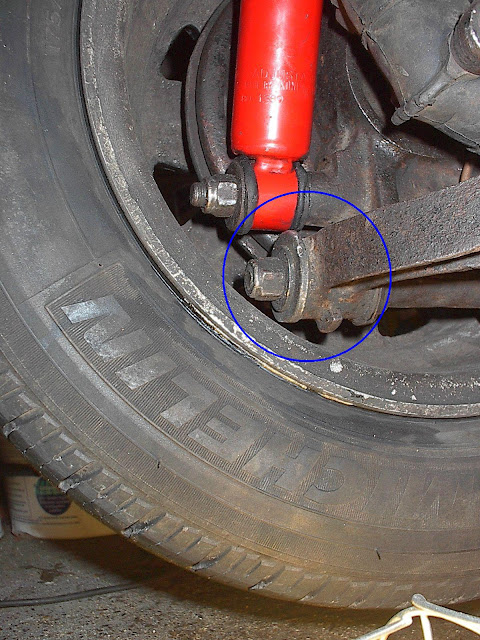 Finished getting the GT6 back together on Saturday afternoon but couldn't test drive it as the missus was out  and I had the kids to look after, in fact I didn't get a chance to drive it until fairly late last night.

I only tried it around the block but noticed an intermittent very light click, click click noise coming from the rear on the side where I'd had the halfshaft out. Not very loud and I may have thought it was slight play in the UJ if I hadn't just replaced it.

I jacked the car up tonight and traced it to a balance weight on the inside of the wheel rim just catching on the lower outer Wishbone seal metal shroud. As it was a back wheel I decided balancing isn't that critical, also the tyre is nearly worn out so I'm replacing it soon anyway, I therefore took the balance weight off for the time being.

Clearance has always been marginal with the offset of the cosmic alloys ad the rotoflex suspension, in fact I used to run it with 1/4 inch  wheel spacers at one time. I may have to revert back to them. I stopped using them as I didn't like the idea of less thread in the wheel nuts so I may have to replace the wheel studs with slightly longer ones.

The car is booked in for a  bit of welding on the chassis just in front of the anti roll bar mounting and an MOT re-test, then I'll be all set for the rest of the year.
Posted by Andy Cook at 21:50 No comments:

After a 3 hour struggle this evening the halfshaft is now back on the GT6 with all the various Rotoflex suspension bushes lined up and bolted in place. Rotoflex halfshaft refitting is never an easy job in a cramped garage even though I've got the special spring lifting tool. It wasn't helped by the fact that my trusty old large lorry bottle jack that I've had for about 30 years decided to pack up this evening and this is what I normally use to jack the spring lifting tool up.

Just need to go around and tighten everything up, reattach the brake hose and handbrake cable, bleed the brakes and give the nuts and bolts a final toque once the suspension has settled. Should hopefully be able to get that done in an evening although it won't be tomorrow night as I'm out with the boys for a few beers, I think I deserve it!

I must remember to replace the wiper blades I purchased before taking it back to the MOT station for welding and a re-test, it would be a pain if I forgot to fit them and it failed again on something so simple to fix!
Posted by Andy Cook at 23:58 No comments:

Well it's been taking a little longer than I'd hoped to replace the wheel bearing on the GT6 for the MOT. First of all we had the cold snap with snow and temperatures down to minus double figures, needless to say this impacted my motivation to get out there into a cold garage and work on the car!

When i did start work I got the halfshaft removed in a couple of hours. I'd already ordered a wheel bearing so I thought it would be a fairly quick job. However, after stripping down the half shaft I found that the existing shim for adjusting the end float had disintegrated. Quite often you can get away without re-shimming the bearing when you replace it so I hadn't ordered any shims. This put a bit of a delay on things while I ordered some shims and other bits from Canleys. I decided to replace the inner wishbone bush with a polybush as this is one of the few suspension  bushes I haven't upgraded on the car so I included a polybush in my order.

After the delay while I waited for the parts to come and  some trial and error I managed to get the end float sorted with 2 shims, last time it only took one so I would have needed a shim even if the old one hadn't disintegrated. I then noticed there was some play in the UJ, so I replaced that as well. Rather than send off for one I went to a local motor factors, blimey UJs are expensive from a non-Triumph place nowadays, it weighed in at 17 quid!

Anyway halfshaft is now all rebuilt and ready to re-install in the car which is always a bit of a fight with a rotoflex car so I'll get ready to swear and curse and bruise my knuckles! Hopefully I should be in a position to get the welding and new MOT done sometime next week and that'll be that for another 12 months.
Posted by Andy Cook at 00:10 No comments:

Oh no it's MOT time

Put the GT6 in for this week and it failed. Nothing too bad fortunately though.
Windscreen Wiper blade, Wheel Bearing Exhaust Clamp and a small bit of corrosion on the chassis.
I must admit, the wiper blades have only been replaced once in the 24 years I’ve owned the car so I deserve that one so I’ll even splash out and treat the car to a pair!
The tester fixed the exhaust clamp there and then, it had come loose and had moved along the pipe, no big deal there then!
The wheel bearing is unfortunately a rear one which is a bit of a pain to do with rotoflex suspension both because any job on the rear axles is a bugger with rotoflex, plus the bearings are shimmed. Still this will be the 3rd bearing I’ve replaced and I've have managed to shim them up OK in the past so it should be OK this time as I know what to do.
The chassis corrosion is just in front of the suspension turret, it was repaired in the same place on the Chassis about 20 years ago. I’ll have this repaired at the centre as it’s only a small bit of work.
I had the car tested this year at Moonface Service Centre in Hook, up until a couple of years ago they were a classic restoration company but changed direction  a couple of years ago to change their business and concentrate on MOTs and servicing. They did a load of bodywork and a respray on the GT6 a few years ago when they were into restorations and I’m happy with the quality of their work. The good news I did get from Jim the owner is that they he is expanding into restoration work again and is currently setting up a new bodyshop so that’ll give us back a reasonably priced and reliable restoration company locally again….
Posted by Andy Cook at 19:55 No comments: