I had a very enjoyable trip into mainland Europe with the GT6 with a visit to the International GT6 weekend at Bad Vilbel, near Frankfurt. 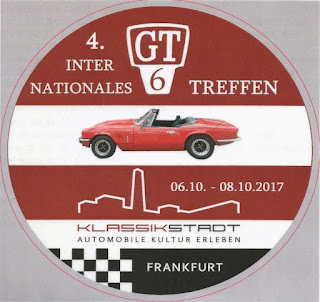 I decided to make a bit of a tour around my visit with overnight stops in Dover, Aachen (Germany), Kerkrade (Holland) and Ashford to break the journey up into an enjoyable break.
The GT6 ran faultlessly covering 1125 miles, although I made a check under the bonnet each day the only attention being required during the whole trip topping up the washer bottle and fuel tank. A bit of preparation with a full service, check over and attention to a few bits and pieces before the journey really paid off.

On the way through I called in on a Triumph friend at his place of work near Brussels. Wim de Pus works at a college where they run automotive courses and it was great to see a number of classics being worked on in the workshop there. I also introduced the GT6 to Wim’s Spitfire, known as “ The Fox”, Wim does a serious amount of mileage in his car having covered 123,000km in the 4 years he has owned it.

The International GT6 weekend
The GT6 weekend is independently run by enthusiasts rather than being associated with any individual Triumph club and moves location each time with new local organisers putting on the event. It was in it’s 4th year this year.
This year the main organisers were Harald and Natascha Hummel although they were ably assisted by many of the other local German GT6 owners.
This year the event centred on a Hotel in Bad Vilbel just outside Frankfurt and attracted GT6 owners and their cars from Germany, Holland, Switzerland and the UK. I’ve realised now that I didn’t actually count up the cars but there were approximately 20’ish GT6s in attendance. When you consider there are a lot more GT6s located in the UK and we got around 70 at the TriumFest 50th anniversary, 20 GT6s at a mainland European gathering is quite an impressive number.

On the continent, convertible GT6s (AKA Gitfires, Spit6s etc) are pretty popular and I reckon around a 3rd of the GT6s at the meet were soft top conversions including Harald’s one.

Most people arrived on the Friday and after a meet and greet in the Hotel Bar we went off to a nearby Restaurant situated in a nearby park overlooking Frankfurt City for a meal.

On the Saturday we had a drive out during the day, with stop offs at a campsite restaurant for lunch and a tour of “Burg Ronneburg” Castle.

Various GT6s on Saturday getting ready for the drive out. 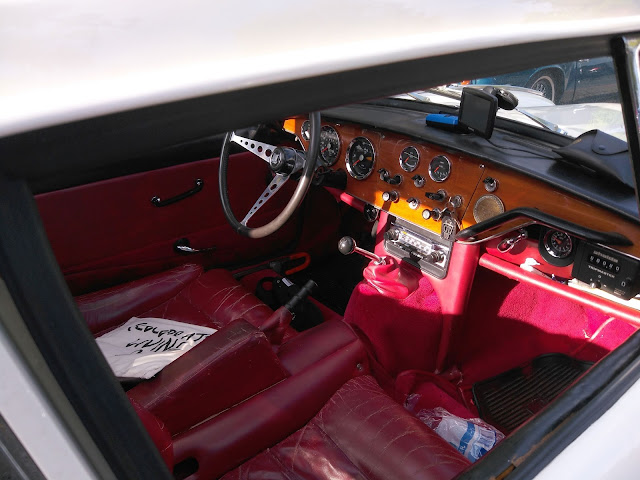 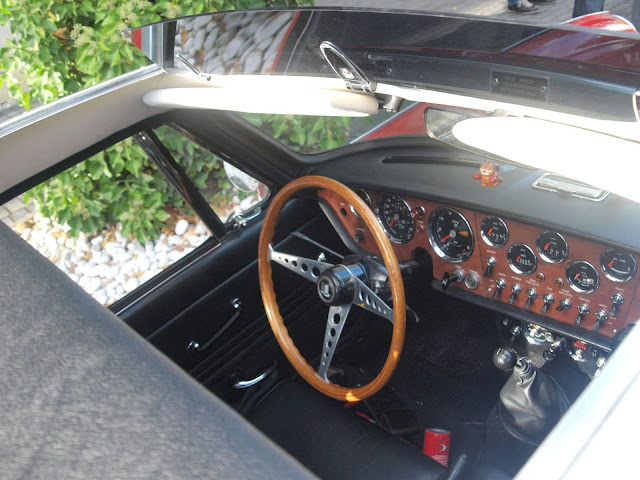 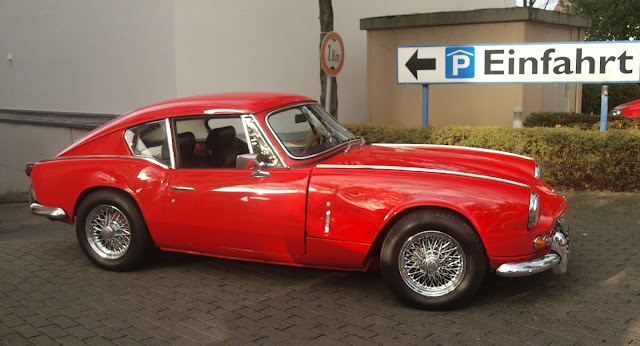 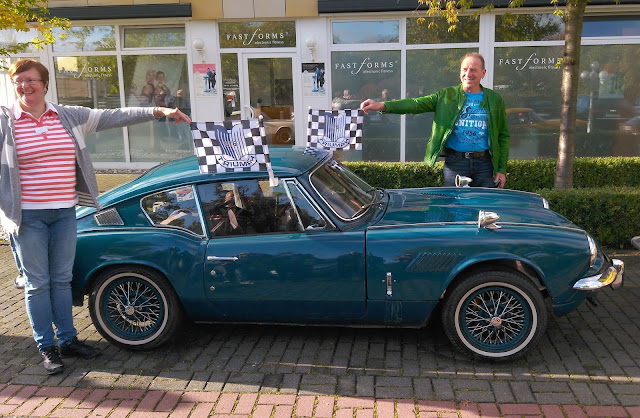 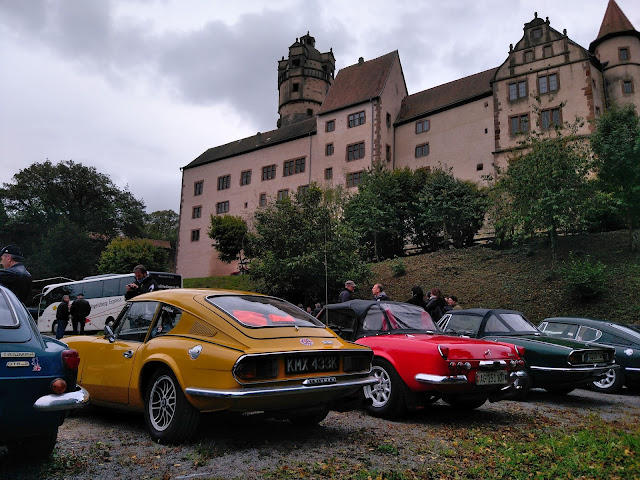 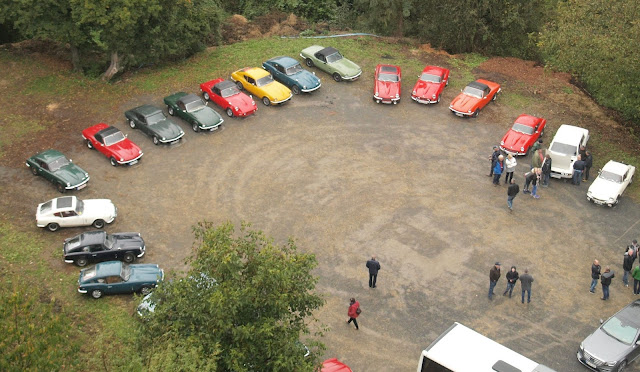 Parking Spaces had been reserved for our GT6s although I must admit the GT6s looked a bit downmarket compared to some of the exotic machinery there. I got told off by one of the more exclusive dealerships for taking photos as there was a no photography sign, the cheapest car I saw in that particular dealer was a Triumph Italia at €120,000, most over the other cars for sale there were €200,000 upwards. There were a few less valuable cars for sale in other dealerships in the complex but nothing as cheap as our Triumphs! Some of the cars in storage in glass partitioned walls were pretty rare. Some of the repair work going on looked good to, like a modern Lamborghini having an Engine change! Outside there were loads of classics too look around, some live music, a bar and food outlets. A really nice way to end the GT6 meet. 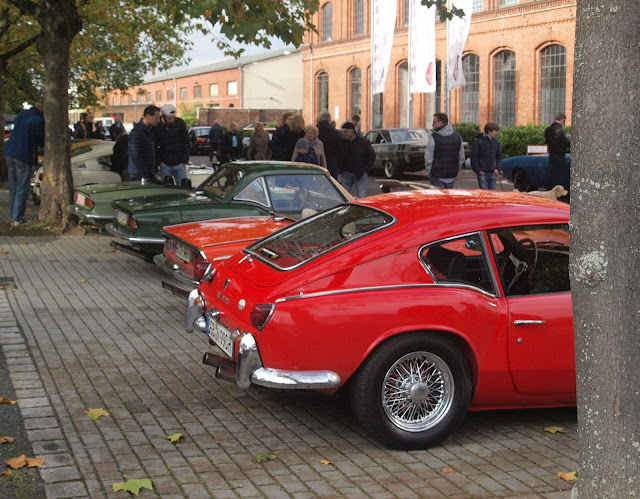 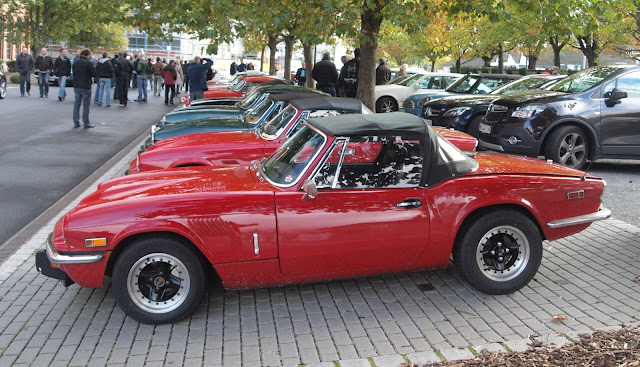 Some of the other visiting Triumphs 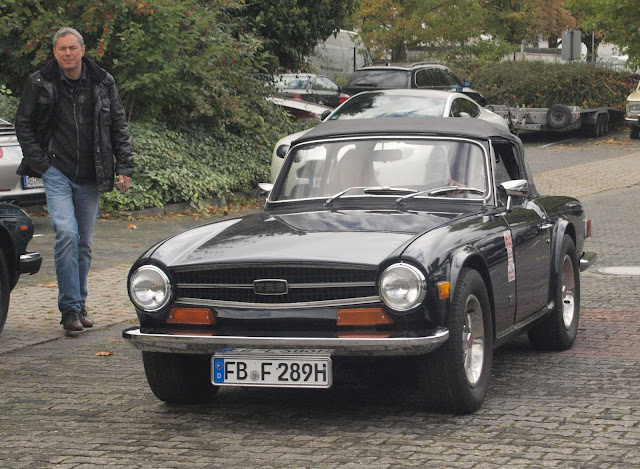 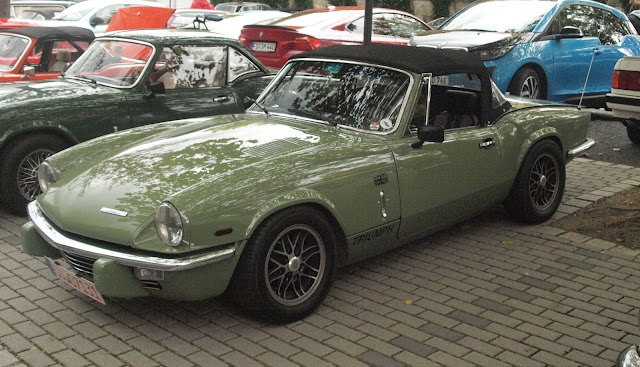 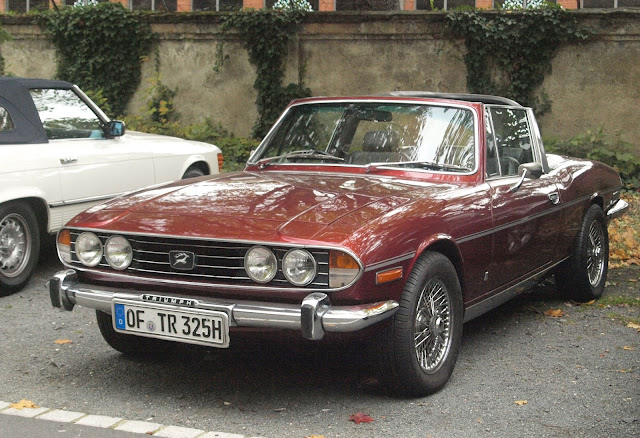 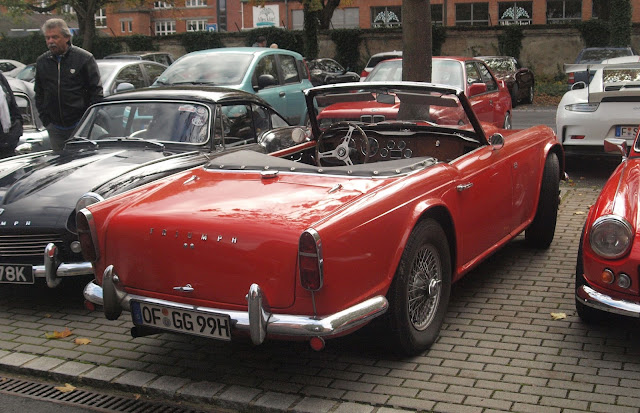 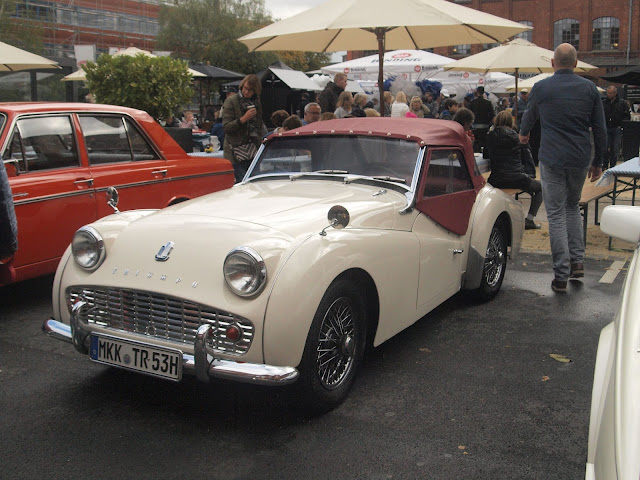 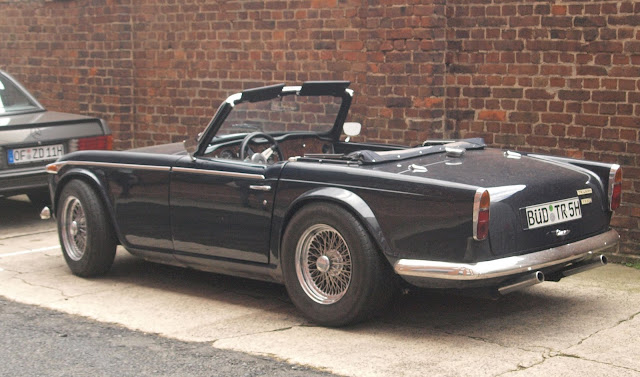 A few of the other non Triumph Classics at Klassikstadt 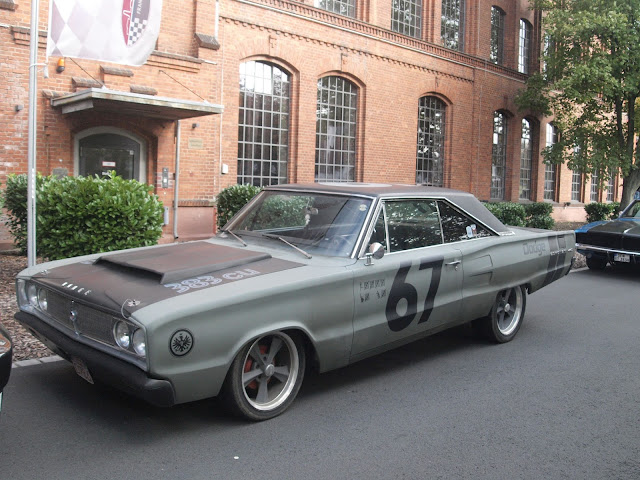 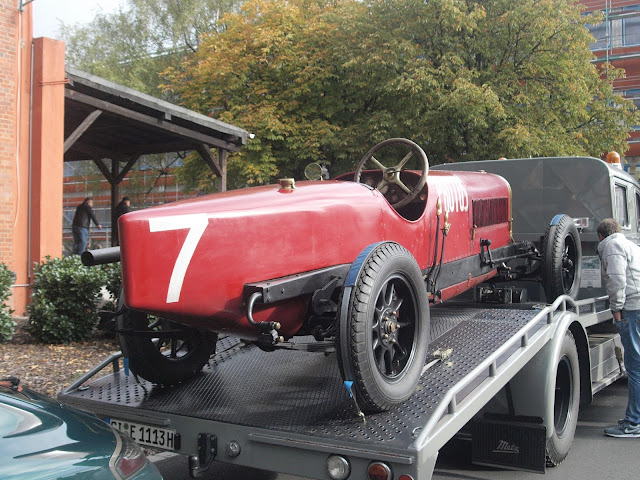 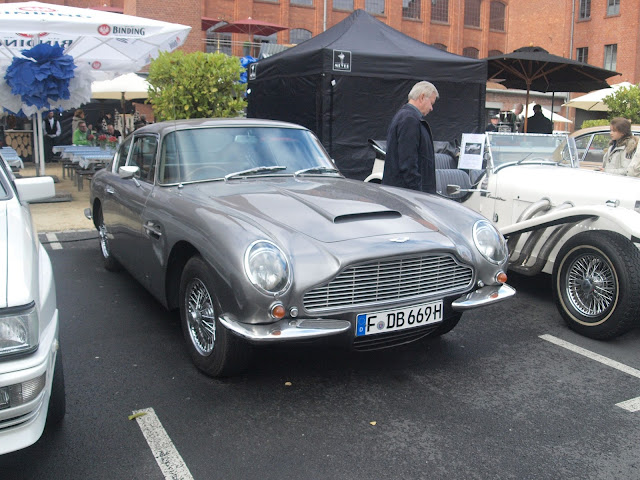 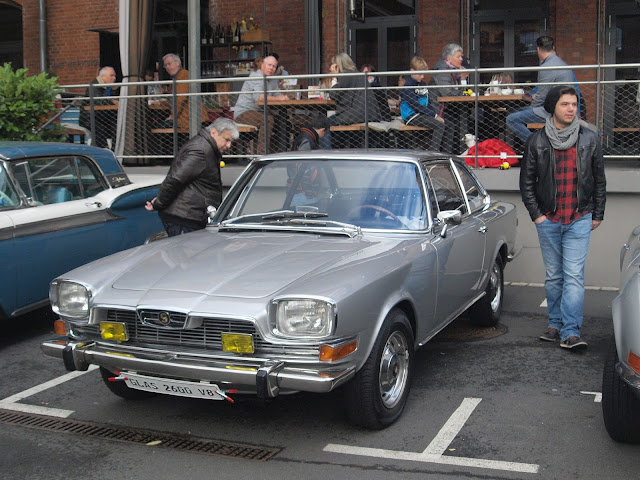 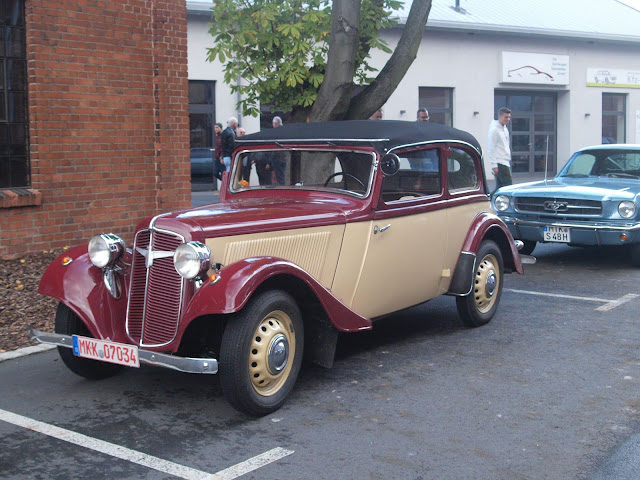 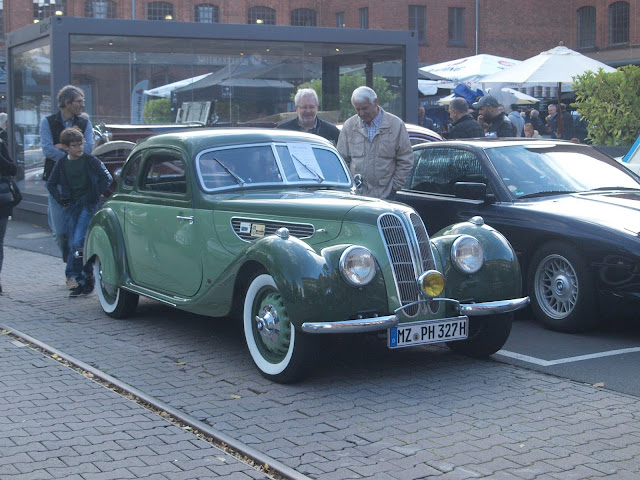 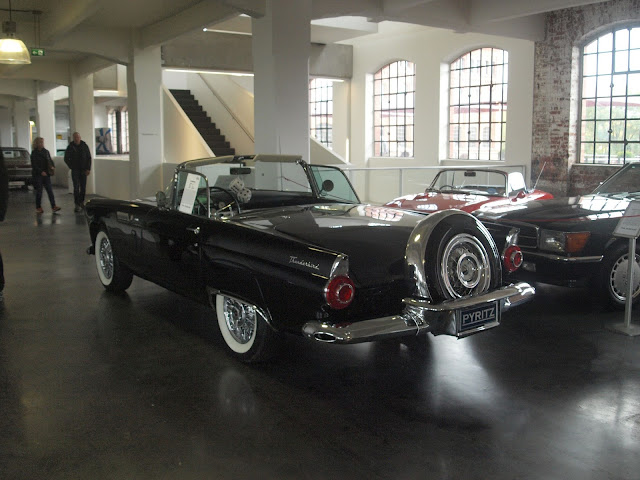 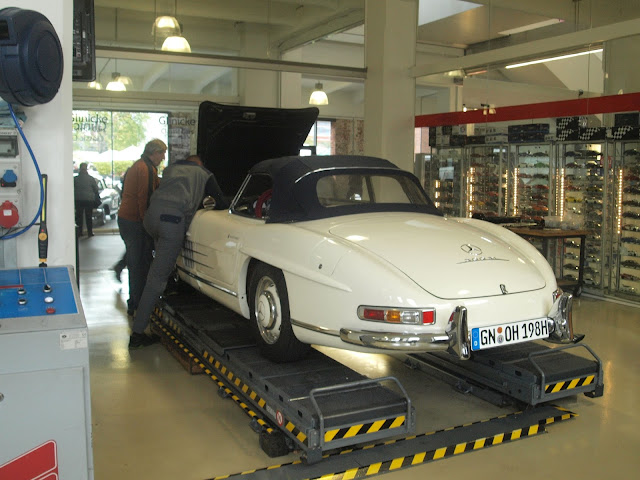 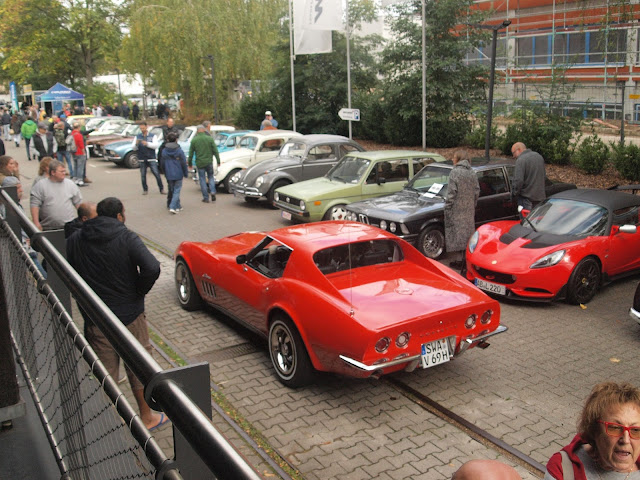 After Klassikstadt most of the GT6 owners went on their way, there were a few of us (including Mike and Sue from TSSC Essex) at the Hotel for one more evening and we met up with Harald and Natasha and a Swiss couple for a meal in a Pizzeria that evening.
Part of my journey back took me along the Rhine.

That evening I stayed at Rolduc Abbey in Holland, this is normally the finish for the Club Triumph 10 countries run and is a nice place to stay so I had booked in there.

On the way back home I stayed in Ashford which was very close to where I purchased my GT6 from just under 30 years ago so I thought I’d swing by to take a picture.
I bought my car at the Lenham Motor Company in Harrietsham, Kent  back in March 1988. The more observant of you will recognise the company name as they used to manufacture GT fast back hardtops and bonnets for Triumph Spitfires back in the day.
At the time I paid the princely sum of £1700 for the car having knocked the dealer down from £1795. It’s increased in value somewhat since then by about 650%, I’ve just checked on line and inflation over that same period is a mere 150% so not a bad investment as long as you ignore the thousands of pounds I’ve spent on the car over the years!