We had our postponed TSSC area Christmas meal last night which I had organised, a little delayed after snow stopped play last time around! A good time was had by all though at the Hoggett Pub Restuarant. We spent some of the money we have raised at the raffles at our monthly meetings on some Christmas Gifts for all that attended, and had a raffle with decent rather than naff prizes for a change. Many Thanks to Carl and Beckie for organising the shopping! a few Triumph's in the car park as well, I opted for a lift from my wife Julia though, I had intended to travel in the GT6 but she was feeling a little under the weather and offered to drive which meant I could have a few beers. As it is the week of St David's Day I opted for some Welsh stuff that they had on tap !! Picture below from the meal. 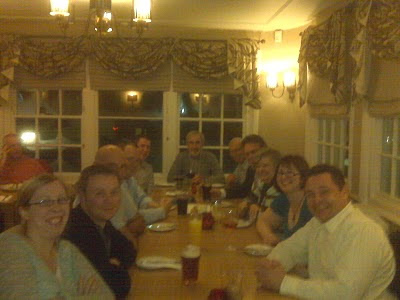