Had a busy day yesterday, went along to the practical classics photoshoot during the day which ended up being in the new Forest and then up to Bedfordshire that evening for a 40th birthday party for Matt Hollingsworth an old triumph mate who I first met around 23 years ago. Matt's now into American Mopar Cars but he does still own the Herald tucked away at home that he had when I first met him all that time ago. Here's a picture of Matt with his Herald back in 1988 taken at Dover Docks on a TSSC Essex trip to the International Spitfire weekend in Holland. 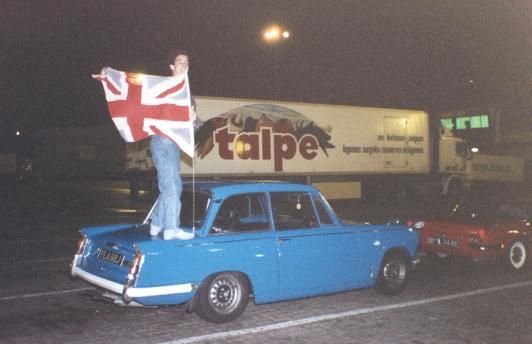 The photoshoot moved location, first I was told it was going to be at Popham airfield then it got moved to the motor museum at Beaulieu. I got up early and had a nice drive in the GT6 down to Beaulieu and met up with the journalist (Andrew Roberts) and photography team and the other two cars on the shoot an MGA and Sunbeam Alpine. The photograher then got "creative" and decided he didn't want to use the museum as a location, he'd recently done a shoot of some Ferrari's in the new Forest and wanted to use a car park surrounded by pine trees as the red MG, white Alpine and Nappy Cack Yellow GT6 would look good against a dark pine green background. Only problem was he didn't know exactly where the car park was. So we got taken to a pub for coffee and he went out to find the mystery car park. An hour and a half later he returned, he couldn't find it so had settled for another car park....

Anyway we lined our cars up as directed and he took a few pictures of the three together and details shots of the individual cars. I was surprised that even though it was daylight he used several remote flashes on tripods as well as a flash on the camera, still I suppose that's all about being a professional and knowing what you are doing! 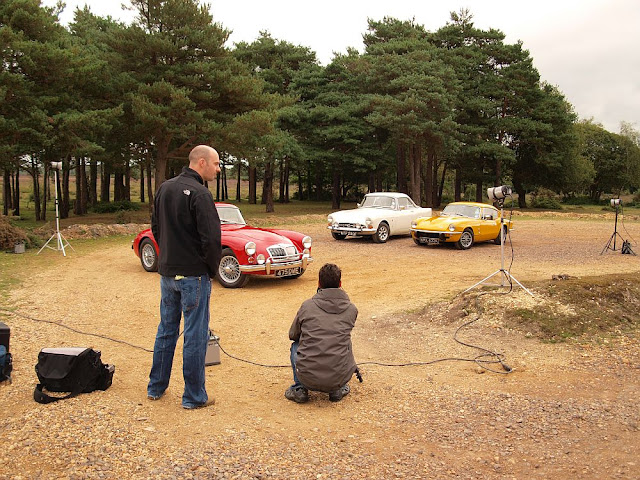 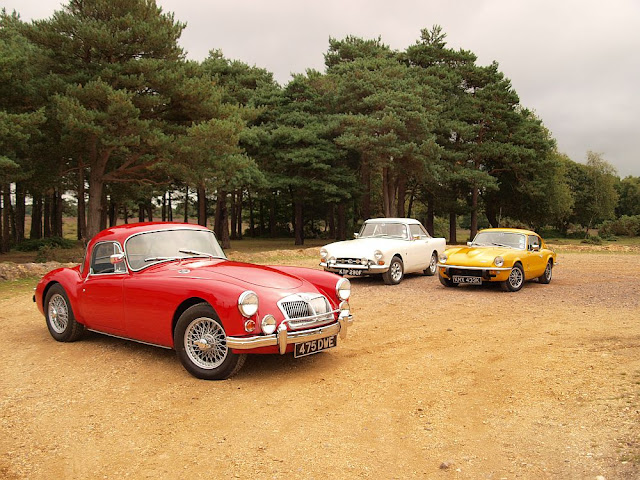 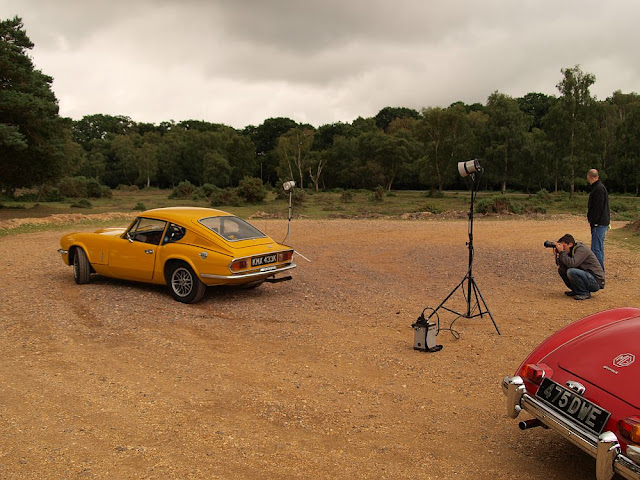 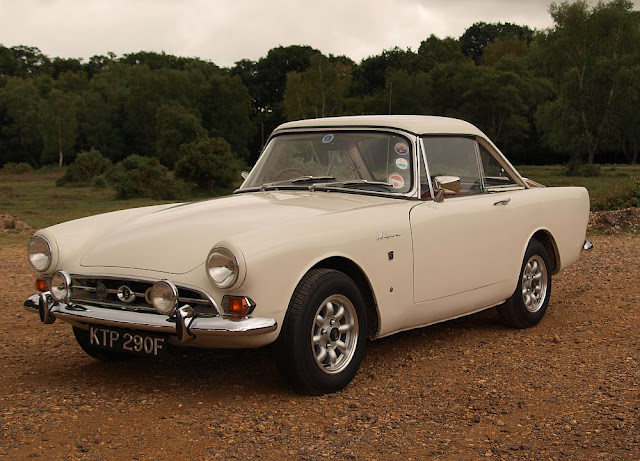 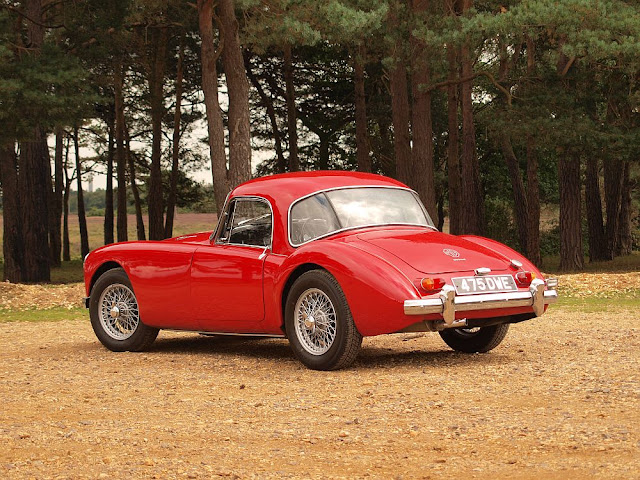 The Journalist Andrew was not a small chap, about 6ft 4 tall and well over 20 stone, he wanted a ride out in the GT6. It was a tight squeeze to say the least getting him in the passenger seat. No chance of the seat belt being long enough! Also no chance of him driving the car as he wouldn't have fitted behind the wheel. We went out for a short drive and then when we arrived back at the car park he had to try and extract himself out of the car again. The only way he could do this was literally to roll out on the the ground in the muddy car park!

Another journalist who was helping (and didn't want to be named as he works for another magazine!) then asked me about the car and took the car out for a drive for a few miles.

We then had a very nice lunch at a local pub courtesy of Practical Classics then it was back to photo shooting with some action shots of the cars driving out on the new forest roads.

The article should be out in the November issue of Practical Classics, can't wait!
Posted by Andy Cook at 17:49 No comments:

Tried to open the passenger door on the GT6 from the outside a couple of weeks ago and it wouldn't open. Ah I thought, probably just something come loose or out of adjustment. Took the door apart and all looked to be in place but it was apparent that the internal lever on the outer door handle assembly wasn't being operated with the outer handle. Stripped out the handle assembly and a piece of plastic fell out, this had broken off a key shapped moulding inside the assembly. This must be a common fault as Paddock's and Canley's sell the plastic pice on it's own. However I have been toying with the idea of replacing the handles, firstly to reduce the number of keys on the keyring as I'll be able to buy a matched pair, secondly because new ones will be nice and shiny!  So do I spend about £120 on a pair of handles or about 6 quid on the little plastic bit. My brain says no my heart say yes..... Decisions Decisions! 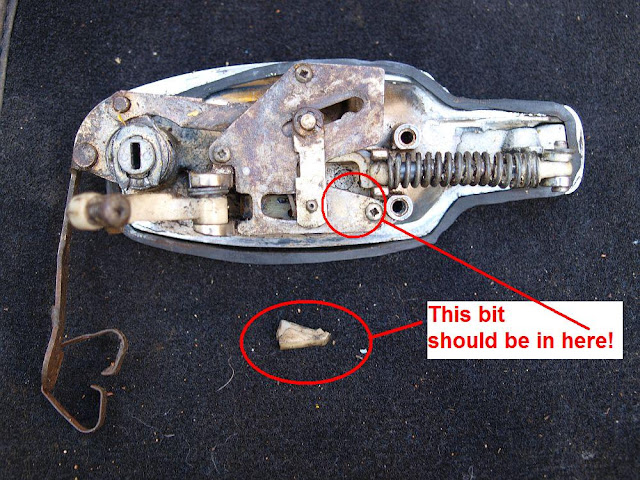 Had a call last week in my capacity as a TSSC area organiser from a journalist working for Practical Classics, did I know anyone locally in Hampshire with a GT6 because they wanted to do a photo shoot, I immediately replied, "Well you could use my GT6!" so I'll be going along on Saturday to Popham Airfield to get a few photo's taken. Spent Sunday giving the car a clean, and I'll do a bit of polishing this week so it's extra shiny.....
Posted by Andy Cook at 19:25 No comments: