A Classic Bodge for Classic Car and Stromberg Hassle

When I bought the Dolomite last autumn I realised I'd probably need a new exhaust before the MOT. The previous owner had welded a patch on the tailpipe silencer and also covered the downpipe in exhaust heat wrap. I knew this was probably to hold it together more than deflect the heat as I could see the parts that weren't wrapped were pretty "crusty". Anyway as expected the exhaust has failed before the MOT, it actually started blowing on the way back from the Club Triumph Dinner a few days ago.

I removed the exhaust wrap around the blow and sure enough there was a bodged welded repair from the previous owner that hadn't survived.


Dolomite 1500 exhausts are no longer available in mild steel so I investigated a stainless replacement system. There only seem to be two suppliers, either Rimmer Brothers or the Triumph Dolomite Club. The Club only sell exhaust systems to members but needless to say that even with the membership it was still going to work out cheaper than Rimmers!

So I've ended up joining yet another Triumph Club and the system was ordered. Only problem is they are made to order and there is a 3 - 4 week leadtime. So it was time to use that classic 70s exhaust bodge courtesy of Heinz. A Baked Bean can was cut up and a tin wrap held in place over the leaky area using jubilee clips with a generous coating of exhaust putty underneath. It's only got to last about 3 weeks so it should be a good enough quality bodge!

I had an issue with the GT6 over the weekend, it's been running a bit weak at revs lately so I decided to tune the carbs. However the needle adjuster (hex socket) screw inside the dashpot on the front carb has seized. The carb was also running a bit weak so I tried to force the adjustment and I used too  and my brute force rounded off the hex socket within the screw.

I thought I had a big problem at first as I thought you needed to undo the screw to remove the needle and get it out to replace it. However I found a website with an alternative method of drifting the needle assembly up and out of the dashpot top in the event of a rounded off screw socket. The screws are only made of brass so the steel hex adjustment key makes mincemeat of it if it seizes up.

Anyway new parts to repair now ordered from Canleys. The car still starts and runs it just won't rev cleanly so I'll fix it when I get a chance.
Posted by Andy Cook at 23:09 No comments:

Fitting 99 pence worth of "Brownness"

I spent this evening replacing my split Dolomite drivers seat cushion with the one that I won recently on ebay for 99p. The Triumph factory workshop manual was rather lacking when it came to this job, it just said remove the seat by removing the 4 bolts from the runners and then remover the seat cushion cover held in by 8 clips.

First problem I came across is that on the drivers seat the rear two bolts on the seat runners are not able to be accessed even with the seat fully forward as the seat gets in the way. Therefore I had to remove the bolts from the height adjustment mechanism to remove the seat. Not to tricky to remove but a bit tricky to reassemble as you need more than two hands to deal with the spring loaded mechanism and replace the bolt.

Having got the seat out the manual mad removing and replacing the cushion cover a lot simpler than it was. The manual simply said to remove the cover held in place by 8 clips. Yeah right! The previous owner had obviously had a go at the cover before as there were a lot more than 8 clips and additionally the seat cover was also glued to the foam. I know on Spitfires and GT6s the covers are supposed to be glued but according to the Doloimite factory manual Dolly seats are not. Anyway I removed the clips with a small electrical screwdriver, including some of the clips from the rear squab where it was fitted over the top of the cushion and peeled back the cushion from the foam as best I could where it had been glued.

I fitted my replacement 99p ebay cushion cover with clips alone, although I my also add some glue as I'm not totally happy with the back edge as there is some Vinyl visible in the fold of the seat. However it'll do for now and it's much better than the split seat cover that was in the car.

This last week started off with a trip to Stoneleigh. Gave a couple of local Triumph friends a lift up in the BMW. I had been contacted a few day's before and asked if I could display my GT6 on the TSSC stand, especially appropriate now I'm the club's GT6 register secretary.  However as I'd already made arrangements to give a lift and as the car would have had to be there on the Saturday and I'd have needed a hotel it wasn't practical. Stoneleigh was very busy this year with it being a combined MG and Triumph show. It was good that it was busy but I must admit I treat Stoneleigh as much as a social event as a spare show and there were lots of Triumph comrades who I knew were there but I didn't bump into. In terms of purchases I didn't get anything too radical this year, a new fuel gauge for the Dolly (as the old one was showing white rather than green light), a passenger door mirror, a silicon rocker cover gasket for the allow rocker cover and a TSSC and club Triumph sticker for the window of the Dolly. The real bargain of the day wasn't exactly a purchase though, I mentioned to Clive (Cliftyhanger) that the Dolly had some play in the rack and he happened to have one that he was giving away free (Cheers Clive!!). Seems like a good one too so I'll give it a strip down, clean up and fit to the Dolly before the next MOT as the old one has started to get some play in it. I didn't take many pictures at Stoneleigh but here are a few. 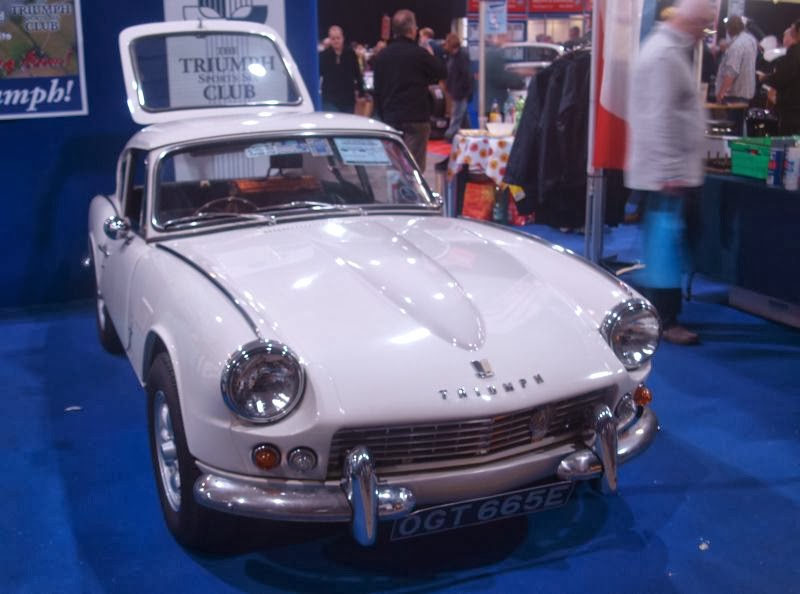 Anyway the Dolomite decided to "reward" me for spending some money on it by breaking down on the way to work on Tuesday. I was queuing in traffic and it just conked out and wouldn't start. I was getting fuel through but it wasn't firing. Unfortunately I had no tools on me either. I happened to have a spare rotor arm so I changed that just in case but to no avail and then called out the breakdown service included in my insurance which is subcontracted to the AA. The AA chap found pretty quickly that it was an ignition issue as I had suspected and then after some troubleshooting determined that the Piranha electronic ignition that had been fitted to the car years ago had packed up. As luck would have it I had the remnants of a service kit in the boot with an unused set of points and a condenser. This was enough of a kit to allow the AA chap to convert the distributor back to points and I was on my way within 20m minutes of him turning up. Having now set the points gap and timing up it's now running like a dream touch wood. I realised that it must ne the best part of 15 years since I set up points timing on a car as the GT6 has electronic ignition fitted since about 15 years ago...


Then a stroke of luck on ebay. The Dolly has developed a split in in Nylon Corduroy material of the drivers seat cushion and the fabric has worn extremely thin. I noticed that a job lot of Dolly spares on ebay included a cushion cover in chocolate brown. I contacted the seller to check on the condition and explained that I wanted to be sure it was better than mine before committing to a round trip of over 100 miles as the sale was pick up only. He offered to just sell me the cushion cover if I won the auction and post it to me. I put in a bid and nobody else did so I got my cushion cover for a mere 99p (plus 3 quid postage). What a bargain and although it isn't new and has some minor wear to the piping and vinyl it's loads better than mine and the corduroy bit is brilliant. A little job for me to do then to replace it at some point.
Then on Sunday the weather made big change for the better 19 degrees and sunshine,wow! And to top it off it was a date for one of the local breakfast meets at While Lion Antiques. I had the kids this weekend so had to use the Dolomite and bribe the kids with the offer of a cooked breakfast in the tea rooms but glad I did as it was packed with the classic car parking area overflowing onto the main road leading to the grass verge of the A30 dual carriageway being lined with expensive classics! See below for some pictures of some of the nice cars that were parked up. 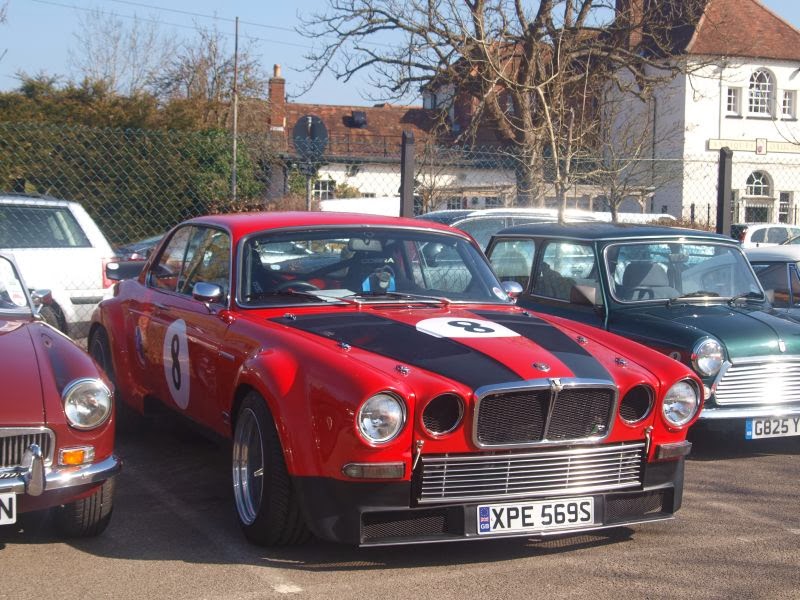 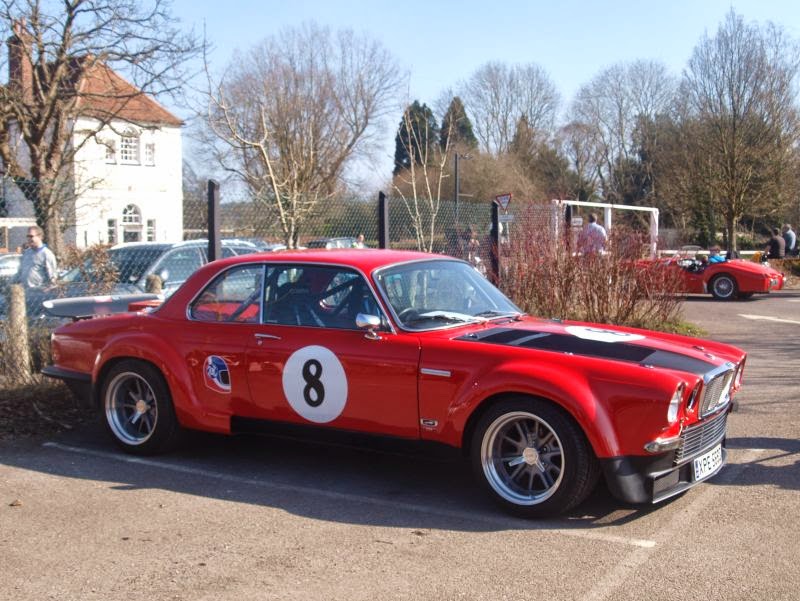 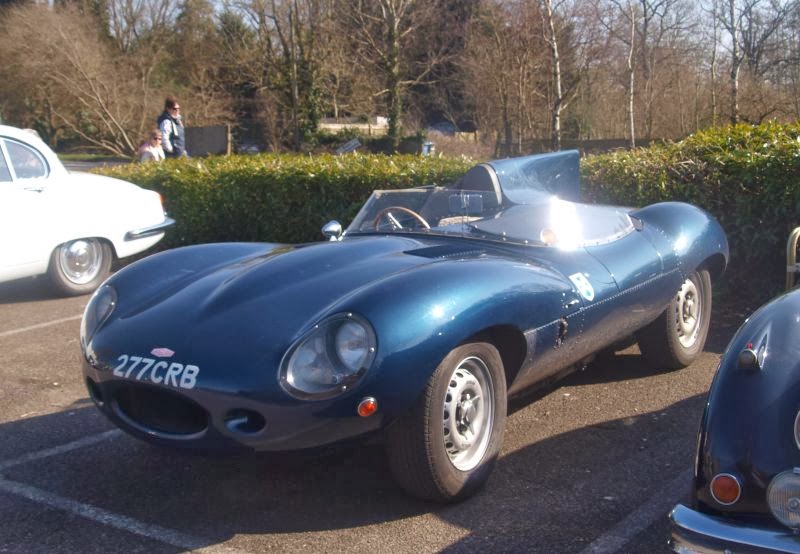 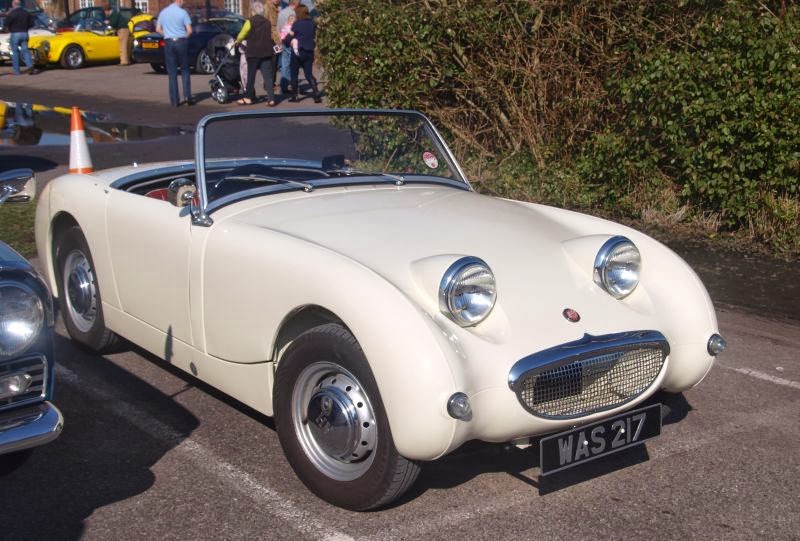 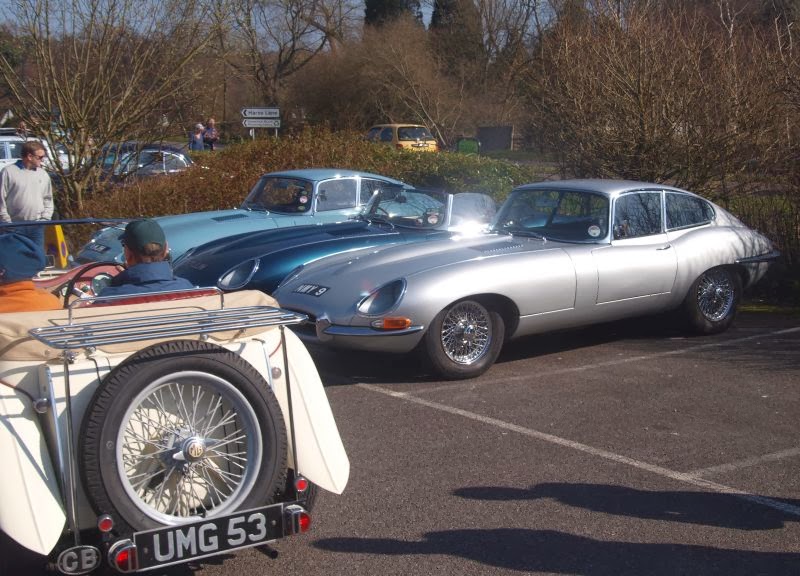 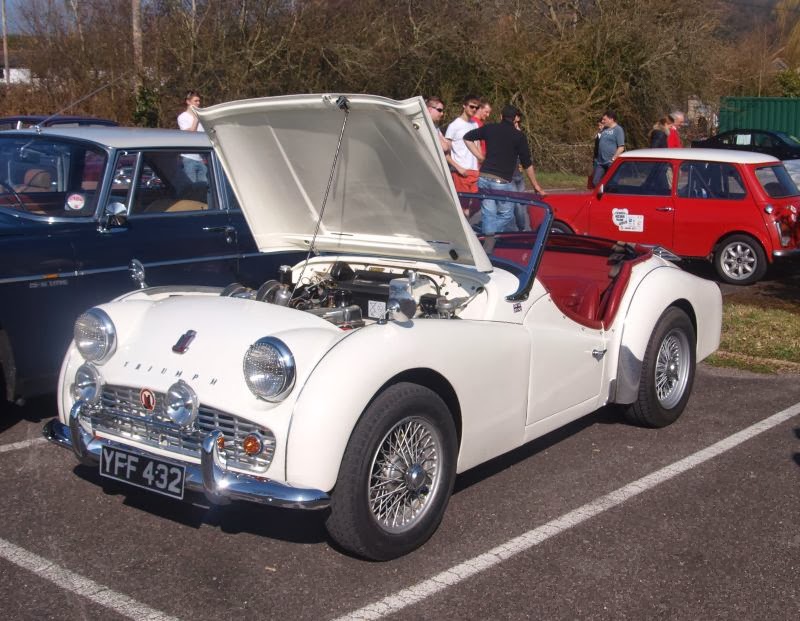 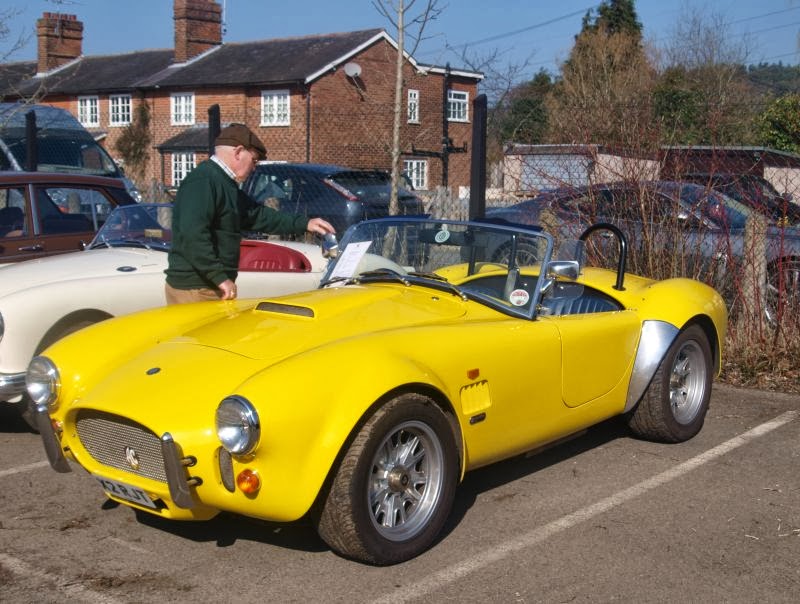 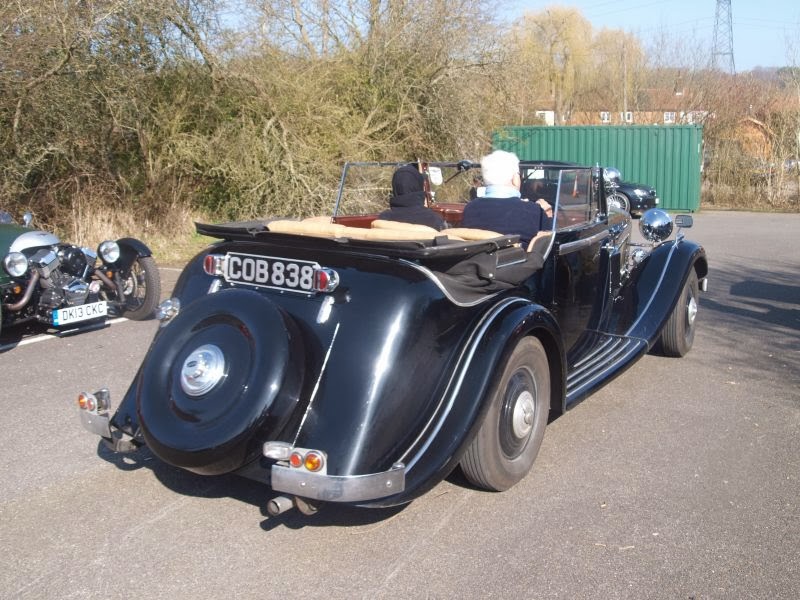 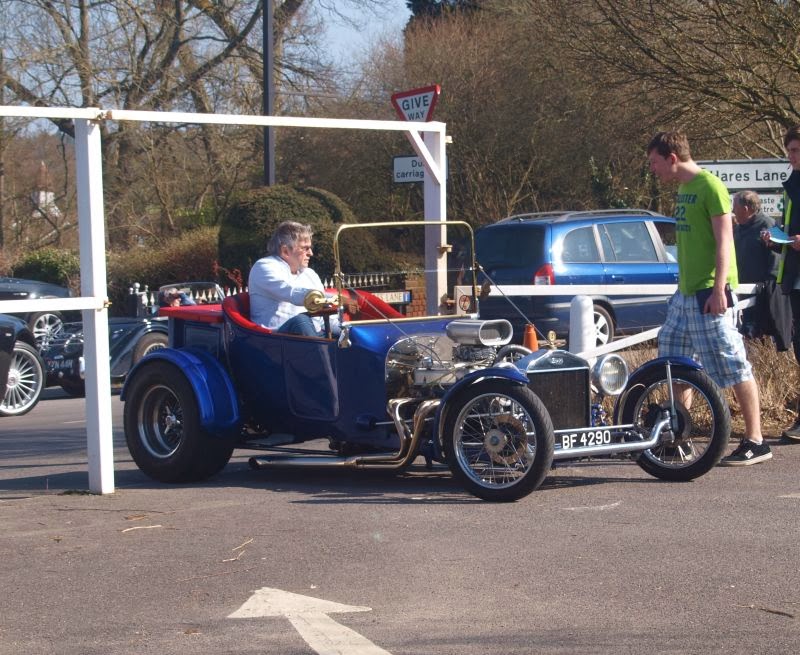