No Blog entries since July "tut tut". But apart from going away in the sun with the Kids for Summer Holidays things have been busy on the Triumph Dolomite front. This is for the best of reasons though as the "Flying Log" is my Round Britain Car this year so I've been busy prepping it.

One job was purely cosmetic, the chrome door trim fell off at TriumFest and there was a bit of corrosion spreading out from one of the clip holes. I tackled that by stripping back, painting with some Finnigan's No1 antirust, followed by a bit of filler  to smooth the repair, primer and Poo Brown rattle can. Not a perfect match but a reasonable finish. I then reattached the trim with new plastic clips.

The next job didn't go quite according to plan. The previous owner had stripped the thread on one of the Front Brake Caliper bleed nipples, this had been fixed with a bodge. he had forced a 10mm bolt into the 2/8 unf thread for the nipple, and bled the brakes by slackening the bolt to almost undone while a helper pumped the brakes. Must have been a bit messy but it got through the MOT like that and the front braking efficiency was fine. However, I didn't fancy the idea of being on the RBRR and having to fix a brake problem without being able to bleed the brakes properly. I found a 7/16 unf bleed nipple on ebay. I drilled and tapped the thread out to 7/16 unf and tried to fit the nipple, then found it wouldn't seal as the hex was bottoming out as it was shorter than the 3/8 nipple. I was unable to find a longer 7/16 nipple so the Caliper is scrap. I shopped around and found that Mick Dolphin was listing NOS Calipers for £35 a real bargain. However I couldn't get hold of him by email or phone so ended up ordering a recon Caliper from Canleys and paying the exchange surcharge. A bit more expensive but it allowed the car to be fixed. Then guess what, Mick contacted me, he had been away on his holidays, he has several NOS Calipers, but by then it was too late.

Anyway the rest of the prep work was basically a full service.

I used the car for the Driver brief up at Gaydon, a round trip of over 200 miles and it ran like a dream.

Then it was time to get the car looking the part for the run, gave it a good clean and attached the rally stickers, charity stickers and rally plaques. There is nowhere sensible to cable tie a rally plaques on the front of a Dolomite without blocking Rad airflow, lights or number plate so I taped it to the bonnet with electrical insulating tape. The bonnet needs a repaint anyway so it doesn't matter if it damages the paint. 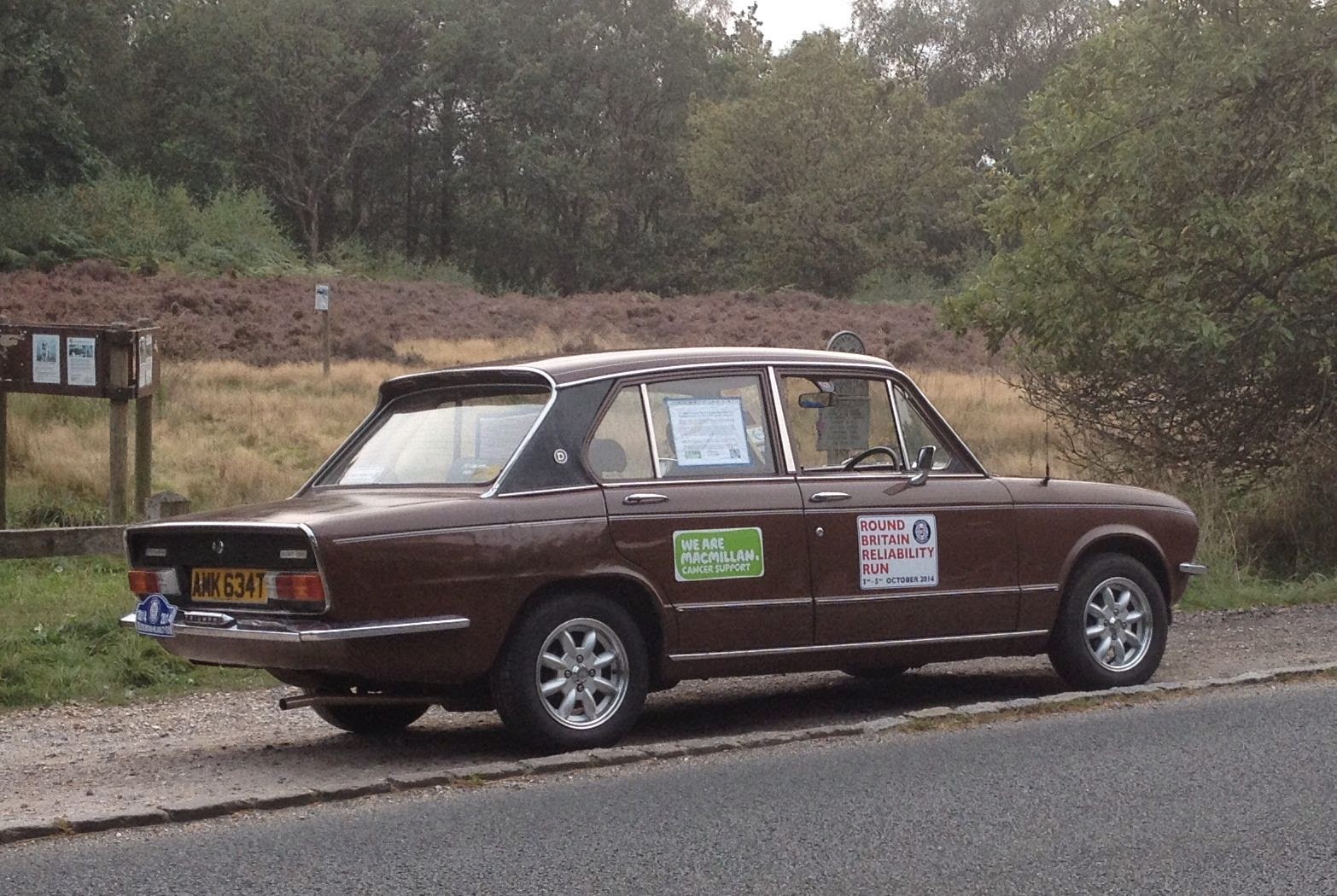 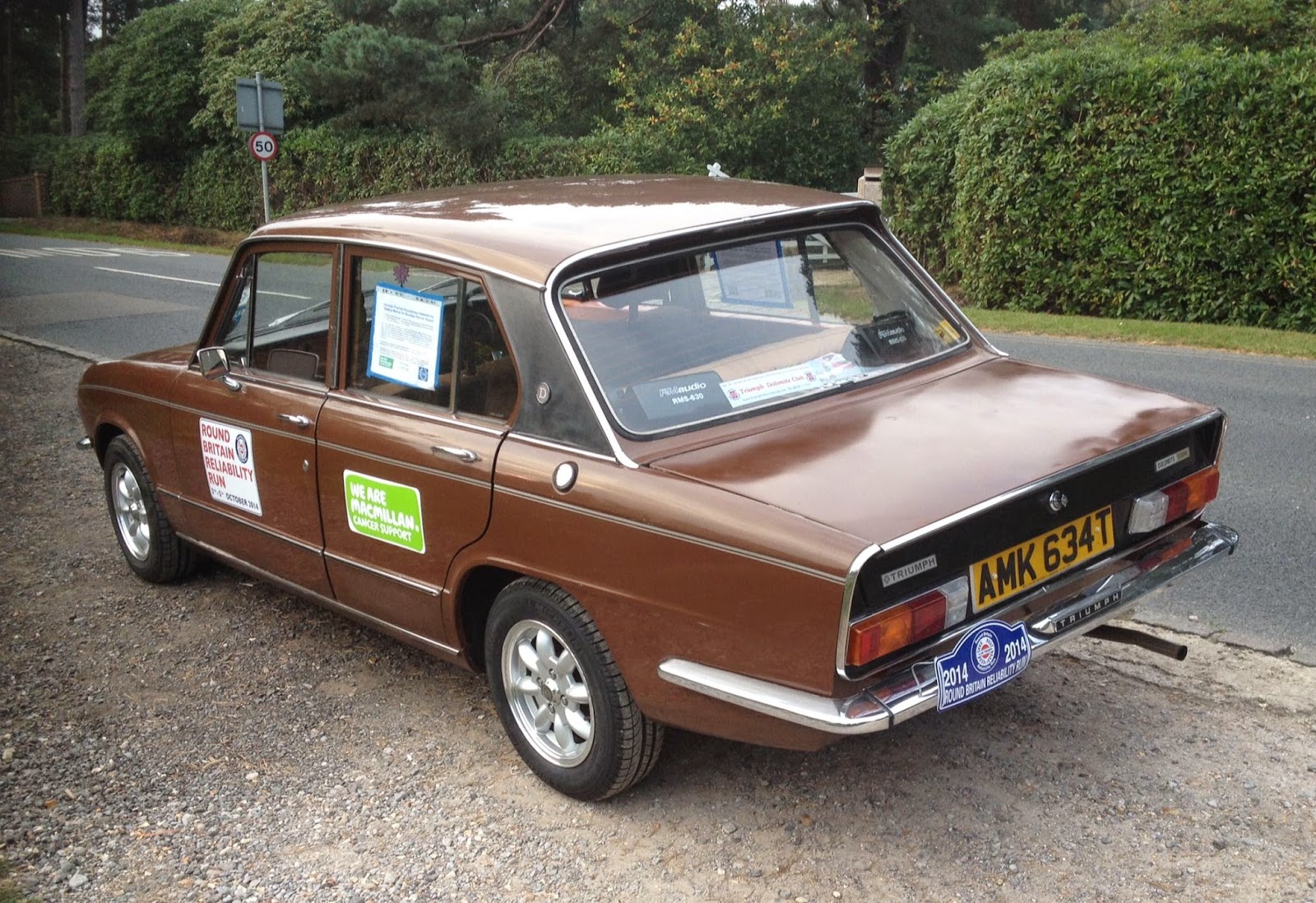 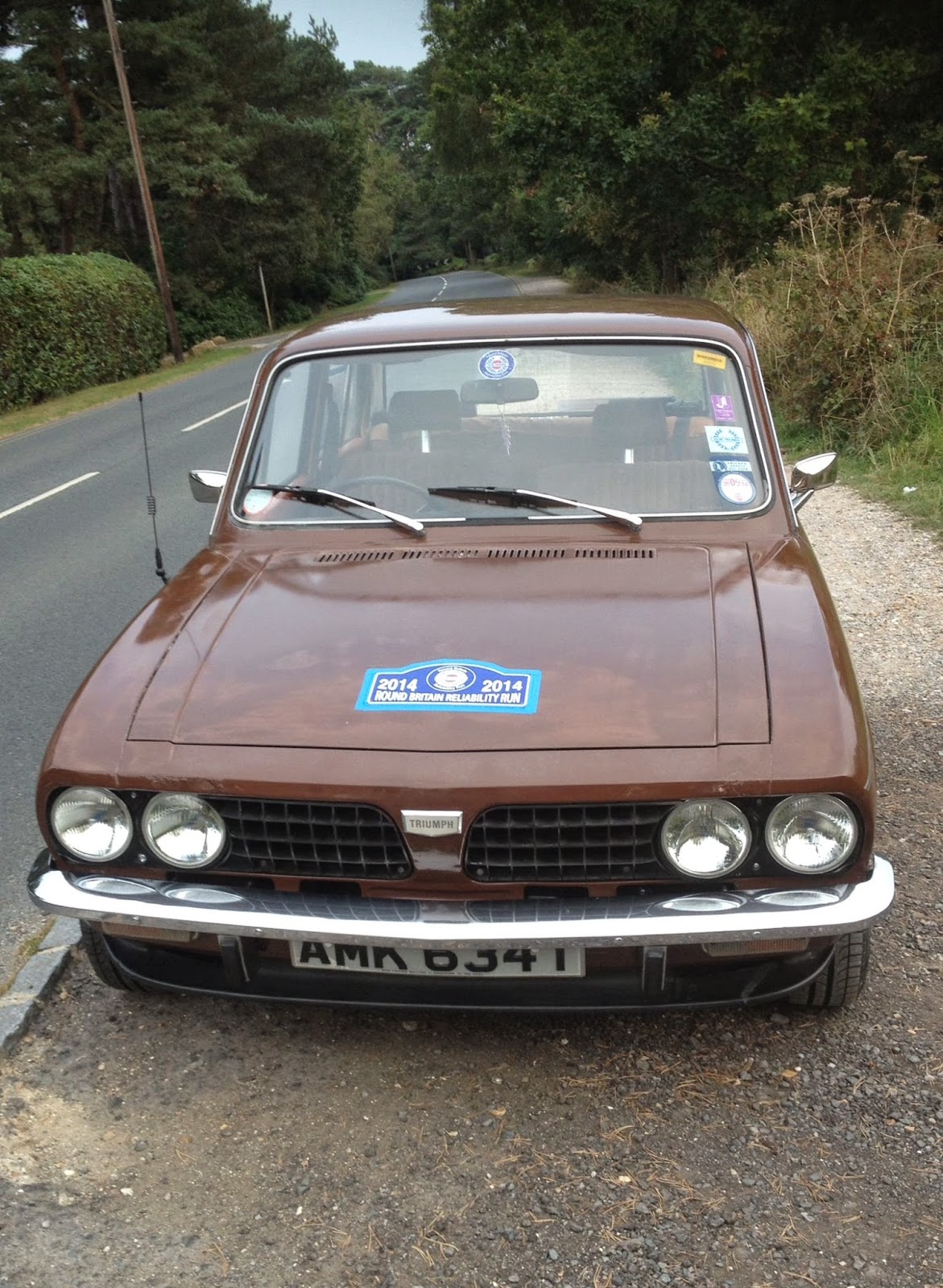 A bit of a clean up of the interior, application of Rainex and it's pretty much ready for the run now.

As you probably know, the charity this time around is Macmillan Cancer Support, a good cause and quite poignant this year having lost a good Triumph friend, Carol Boyland to Cancer earlier this year. If you are reading this and haven't already sponsored me or another team please consider making a
donation via my just giving site:- www.justgiving.com/Flying-Log or via just text giving by   sending a text with "RBRR48 £2 /£5 /£10" (enter one amount only) from your mobile to 70070.

I'm doing the run as a team of with Bodders and Glynn  so may even get a bit of sleep this time around!

One more Triumph event before the run, The Duxford all Triumph Day which I'll be attending in the GT6. Then we'll be off on the run from about 6pm on Friday 2rd October from Enfield, in John o Groats for breakfast on Saturday morning, Wales overnight, breakfast at Lands end on Sunday and back to Enfield after afternoon cakes at Pimperne. Can't wait.