The Aerial Broke on the Dolly, I fiited a nbew one a few months ago but to be honest it never really fitted very well anyway as it wasn't possible to get it totally vertical due to the abngle of the aerial hole on the front wing.

I fitted a short metal one today with a coil incorporated to make it act longer. This has loads more adjustment to make up for the mounting angle. It fits with a very small (5mm) screw thread so I had to use a pennny wsher inside the wing to bridge the gap over the original aerial hole. I bent the washer slightly so that it followed the nner curver of the win.

Anyway, new aerial is fitted now, it looks good and the sound quality is also good. 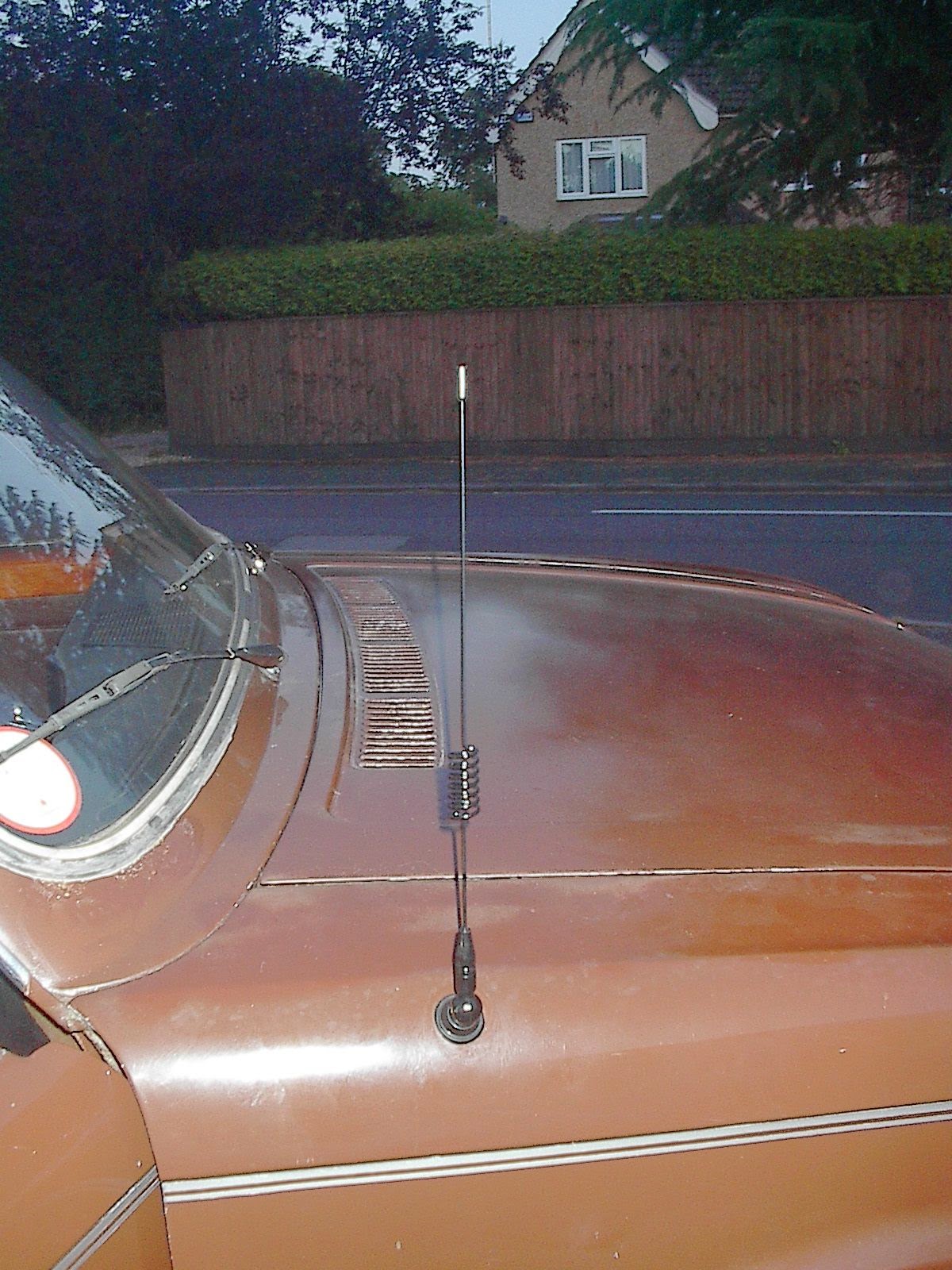 The Power of Internet Forums !!

My Blog isa set up so that it gets posted automatically on the Club Triumph Forum every time I load a post.

Following on from yesterdays post regarding the Dolomite Brakes I had a PM from CT member Mike Barrett who has a late MK3 GT6 that has a similar rear brake set up to the Dolomite with self adjusting brakes.

Mike pointed out that there are suppossed to be some H shaped plates to locate the brake shoes. This wasn't apparent from the Triumph workshop manual but looking at the Haynes manual and the Dolomite Part catalogue they can clearly be seen.

These parts were missing from my car which would have allowed the shoe operated y the handbrake lever to move outwards off the slave piston, bend the brake shoe plate and jam up.

The parts don't seem to be stocked anywhere but it's such a simple little part it was easy to knock a couple up in the workshop of the right approximate size. 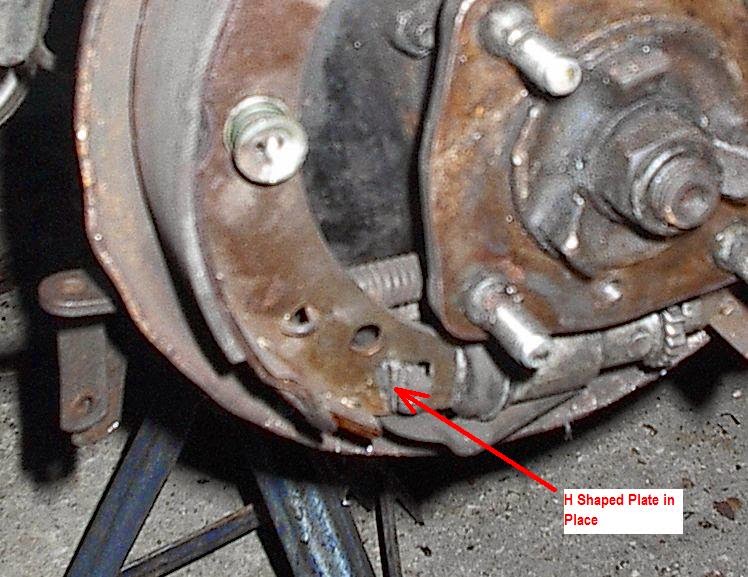 This seems to have done the trick so cheers Mike!!
Posted by Andy Cook at 22:15 No comments:

Bloody Brakes and a good day out at Brooklands

Saturday was a bad day for car stuff. Firstly my modern BMW had a hit and run incident in Morrison's Supermarket car park and I came out from having my Brekkie in the Cafe and doing my local shop to find the corner of the rear valence damaged. I did walk around the car park to try and find if there were any cars with tell tale BMW blue paint on them but to no avail. Probably just as well as the mood I was in I would have smashed the car up (or the owner if they were with it!). Anyway that was part 1 of a bad day.

Part 2 was my MOT retest in the "Flying Log". Having rebuilt the bake brakes and thoroughly checked that the handbrake was now working and the brakes were no longer binding I thought there would be no issues. However, once at the testing station the tester put the car on the brake measuring rollers and had a lot of trouble getting the handbrake to bite with a high enough efficiency, so he yanked the level extra hard. The handbrake then worked satisfactorily in terms of effectiveness but it jammed on solid on both wheels so it failed the retest. He had to take a hammer to the operating levers on the bake plates to free it off so I could drive home.

Anyway Sunday has been a much better day,  first a trip to Brooklands to the Standard Triumph Marque day (more in a minute). Then a strip down of the Dolomite rear brakes again. I found that the shoes that are moved by the handbrake lever on both sides had jumped off of the slave cylinder piston and this had bent the metal frame of the shoes,. I'm sure that must have happened when the MOT tester yanked the handbrake on extra hard, although I'm not sure how this can happen as the shoes are held against the back plate with locating springs. Any way the metal frame of the shoes straightened up OK in the vice and I'll rebuild and give it another try I had a couple of new seal kits stashed away in my spares so I was able to replace the boots on the slave cylinders as well as they had split. I've a feeling I need to let the new brake shoes bed in a bit before taking it for another re-test, then the handbrake may be more efficient without excess force. What I can't understand is how the brakes were still working but they were! 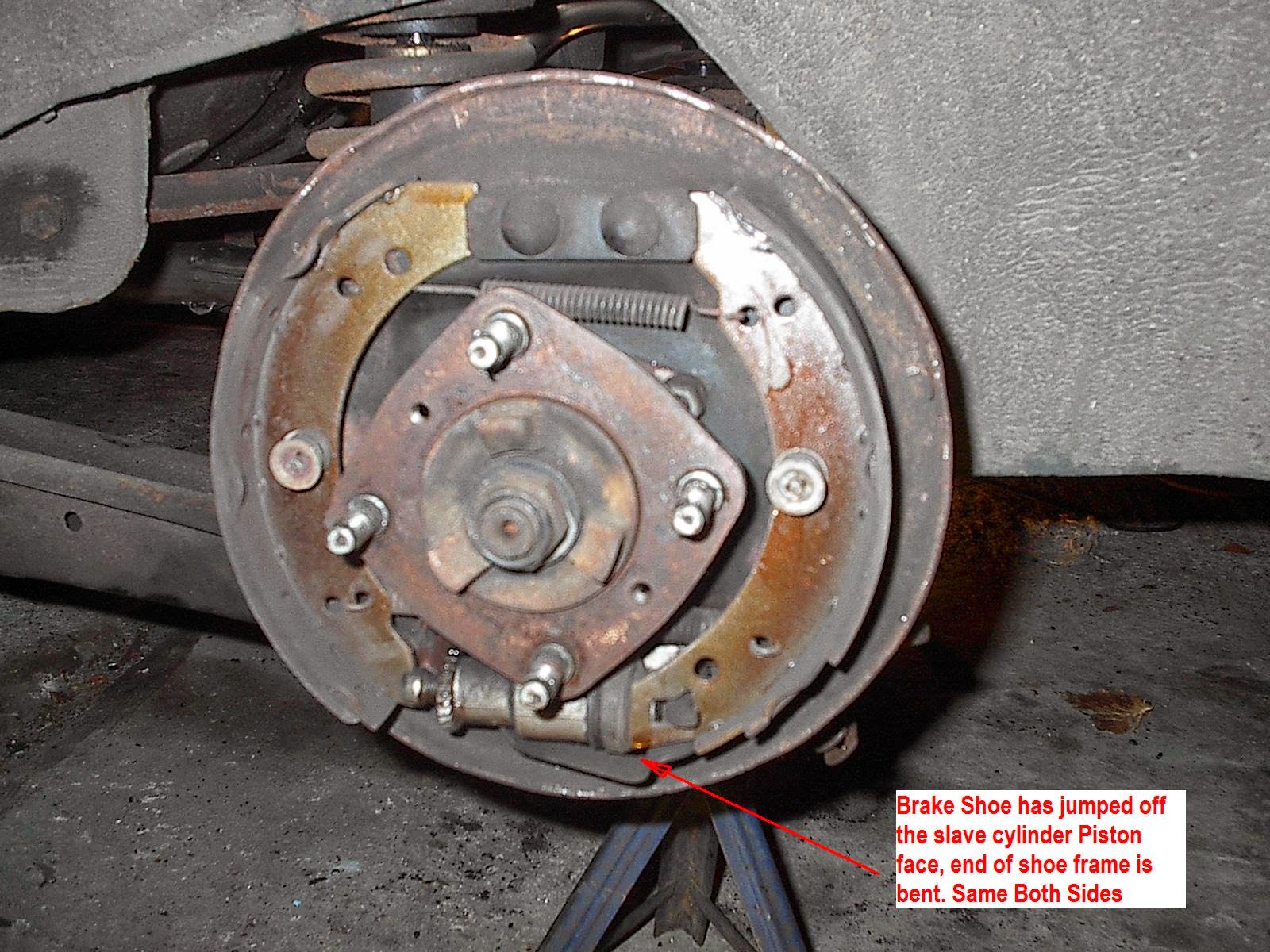 Also on |Sunday was the excellent Standard Triumph Marque Day, this year it was at Brooklands and Club Triumph were the lead club. It was a nice sunny morning and I used the GT6 taking my son James as he loves the museum there.

Highlight of the day for me was when the one and only Triumph Fury turned up. Triumph made only one Prototype of this car which would have been launched instead of the TR5 if they had made it. It has beautiful sleek lines, one of Michelloti's finest. It really looks years ahead of the TR5 and even the TR6 and I'm sure if it had been launched it would have sold brilliantly. Especially in the US with it's almost Corvette Stingray type styling at the front.


The Sun brought the cars out in large numbers and there was plenty of Triumphs to look around while catching up with old friends from the various Triumph Clubs. 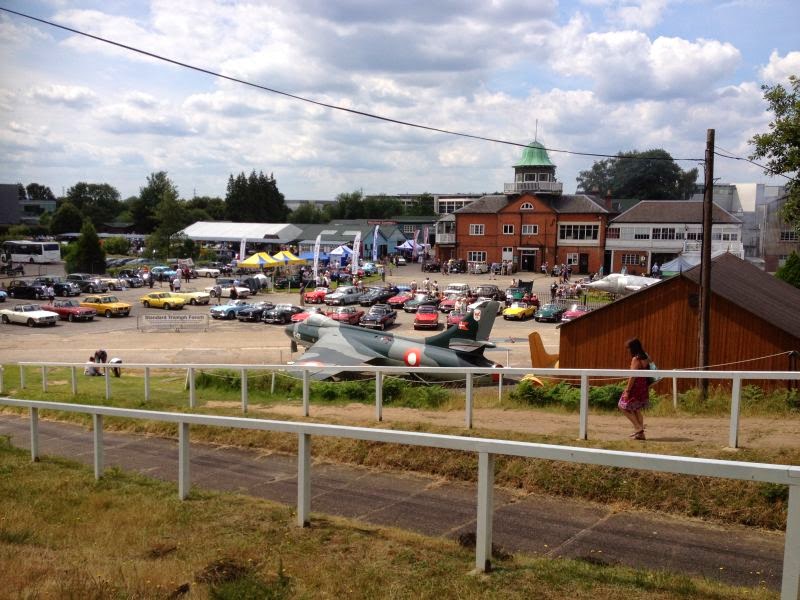 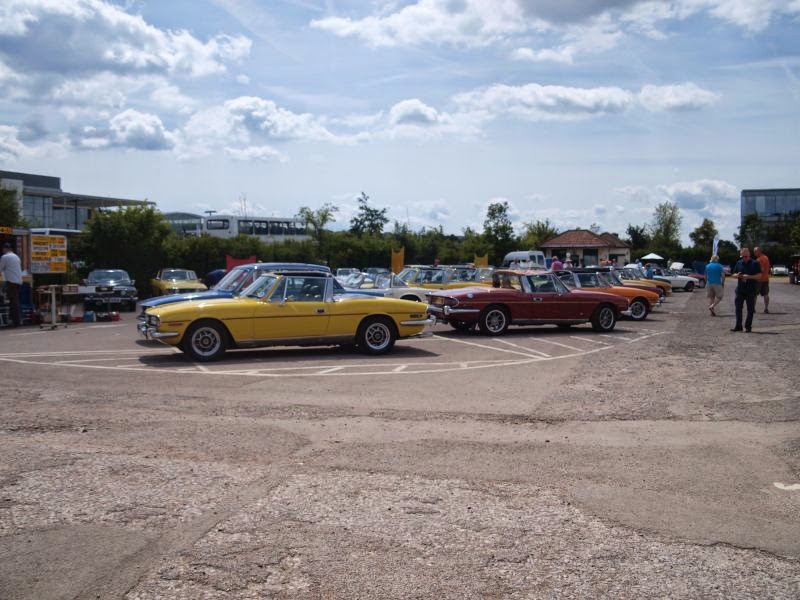 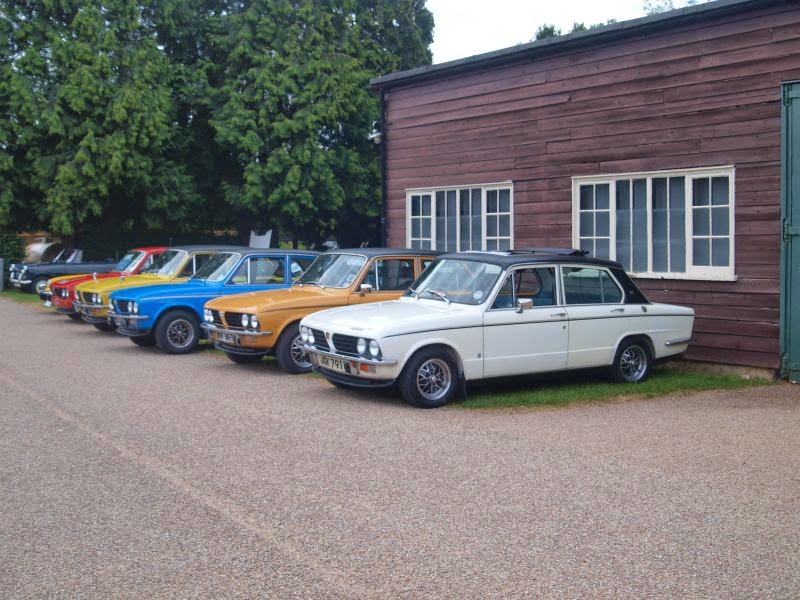 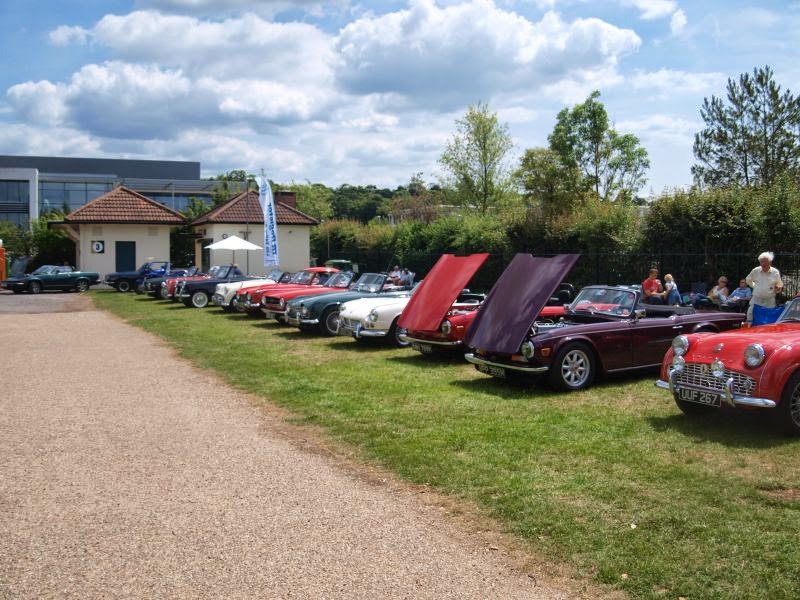 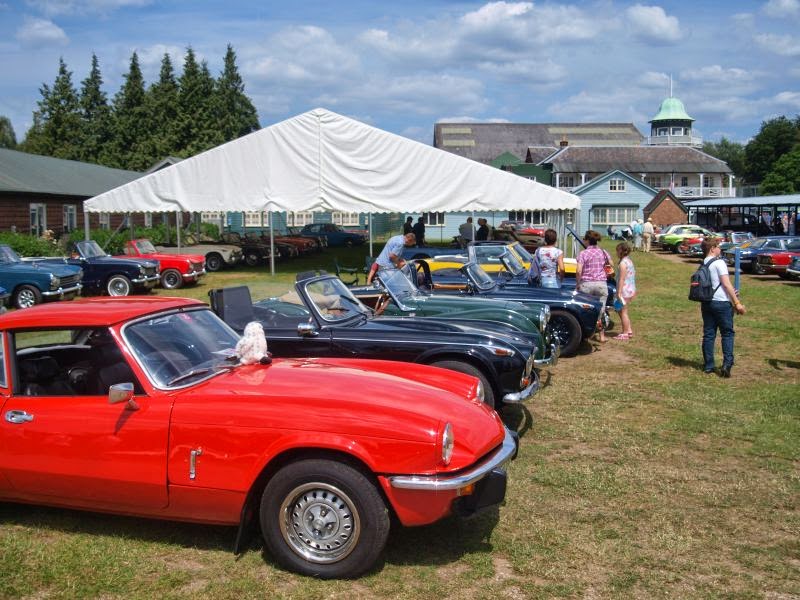 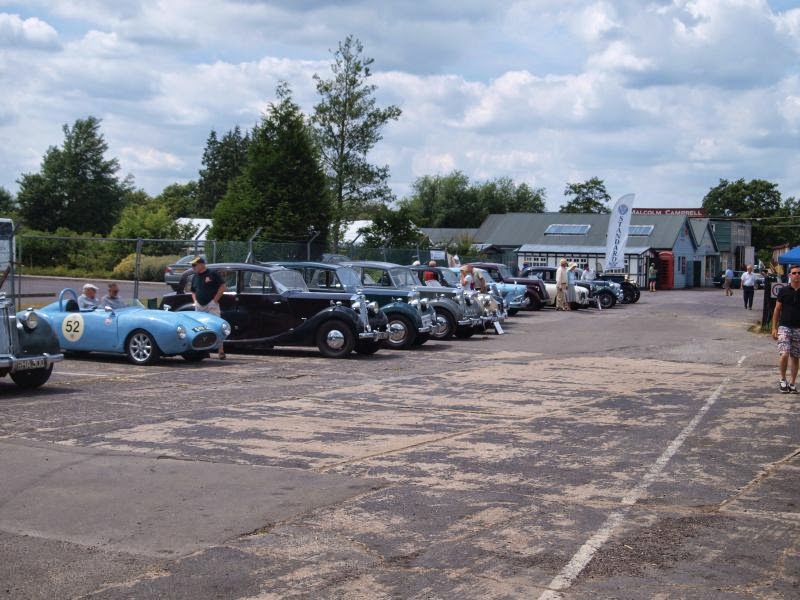 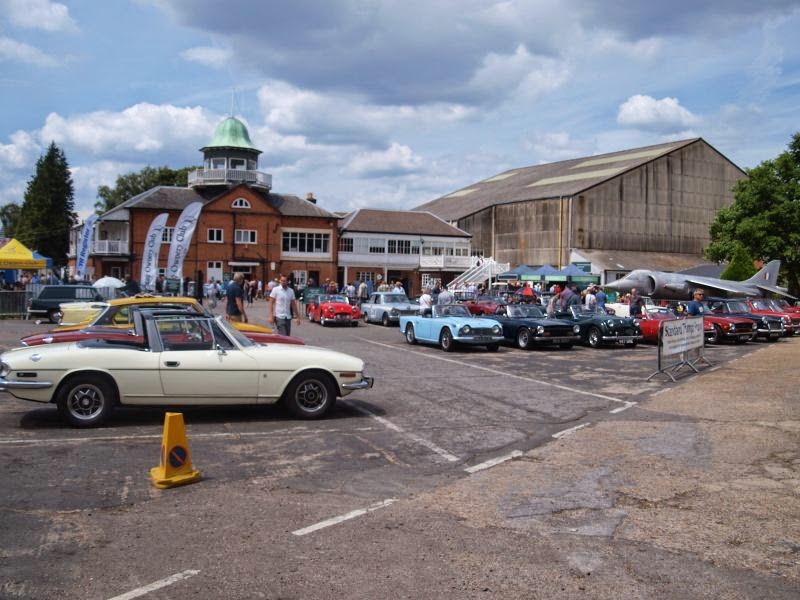 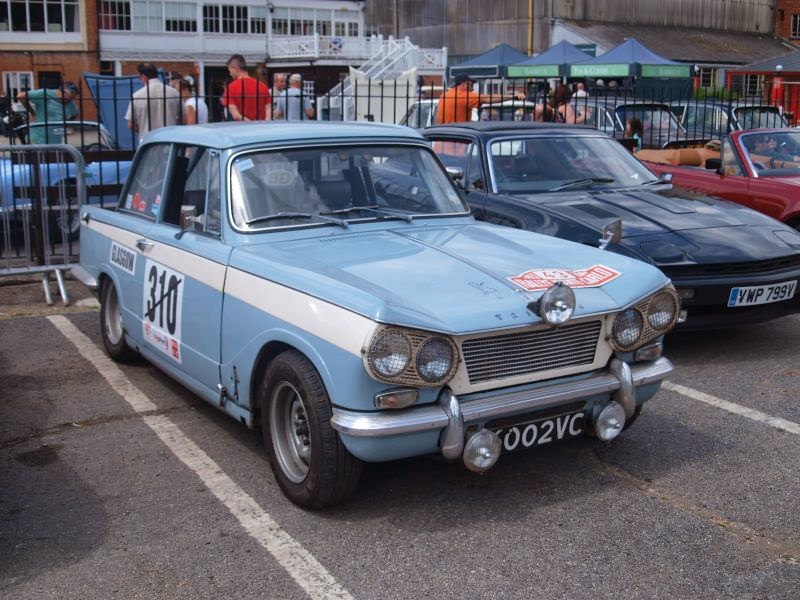 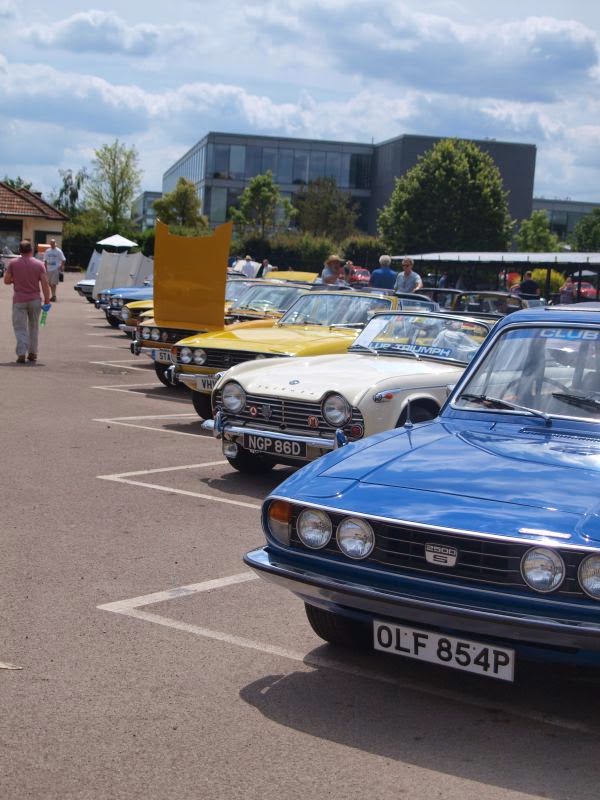 Later in the afternoon the test hill was open for runs, having attended the drivers briefing and paid my fiver I had a few runs up the hill and round part of the old banked circuit.

Plenty of GT6s around the meeting so pictures were taken ready for a future article in my Register Secretary Column in the TSSC courier magazine. 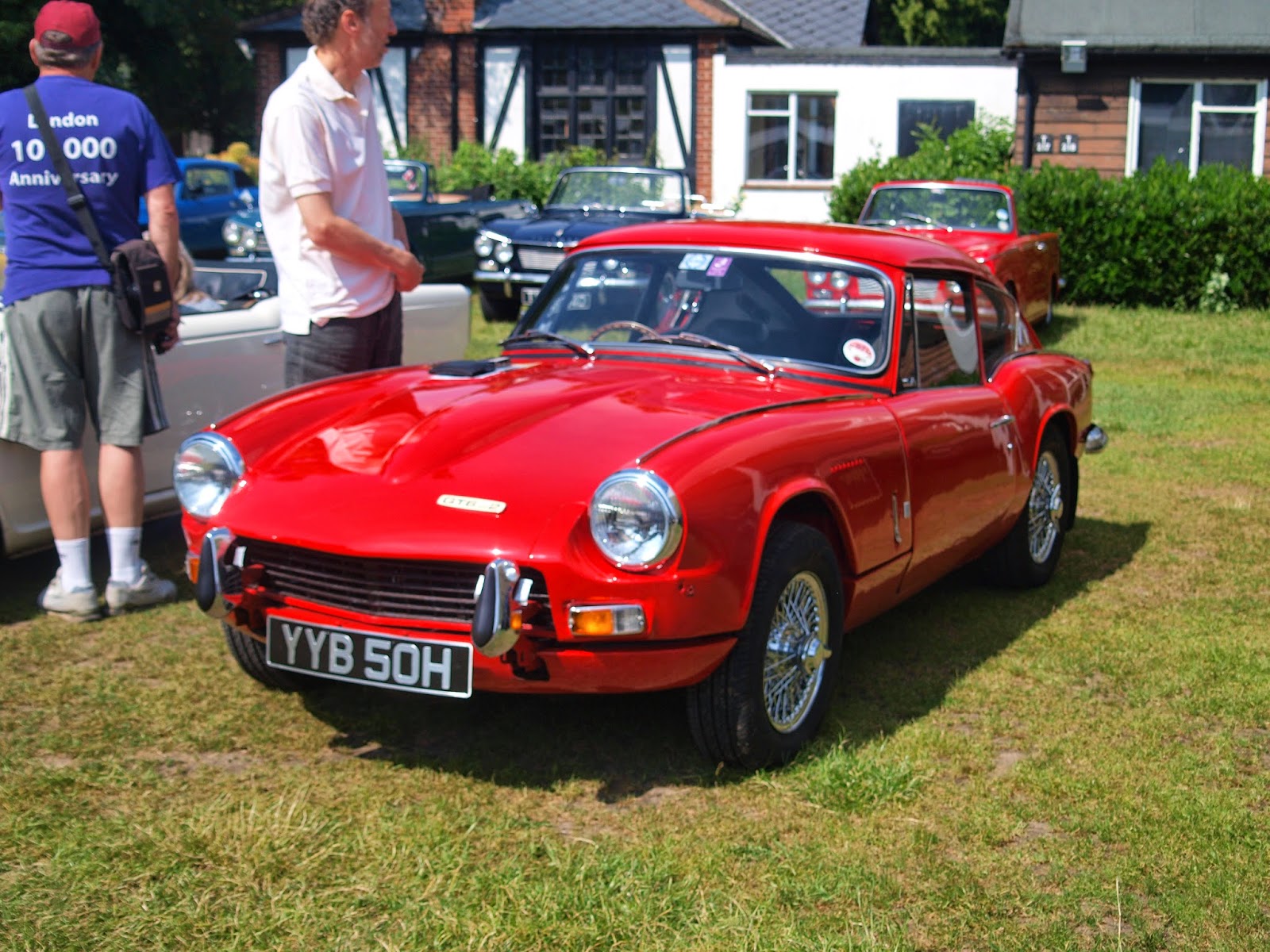 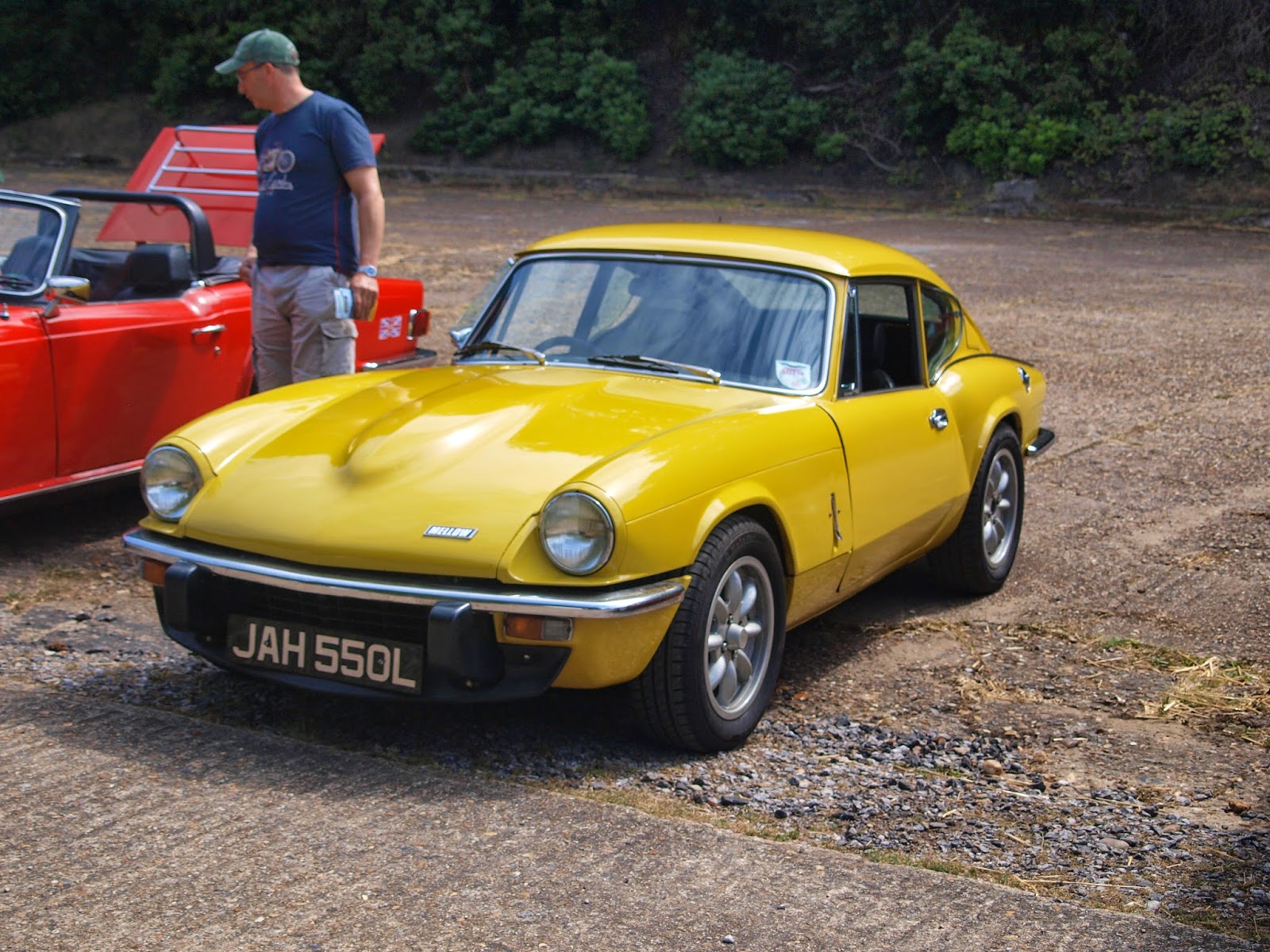 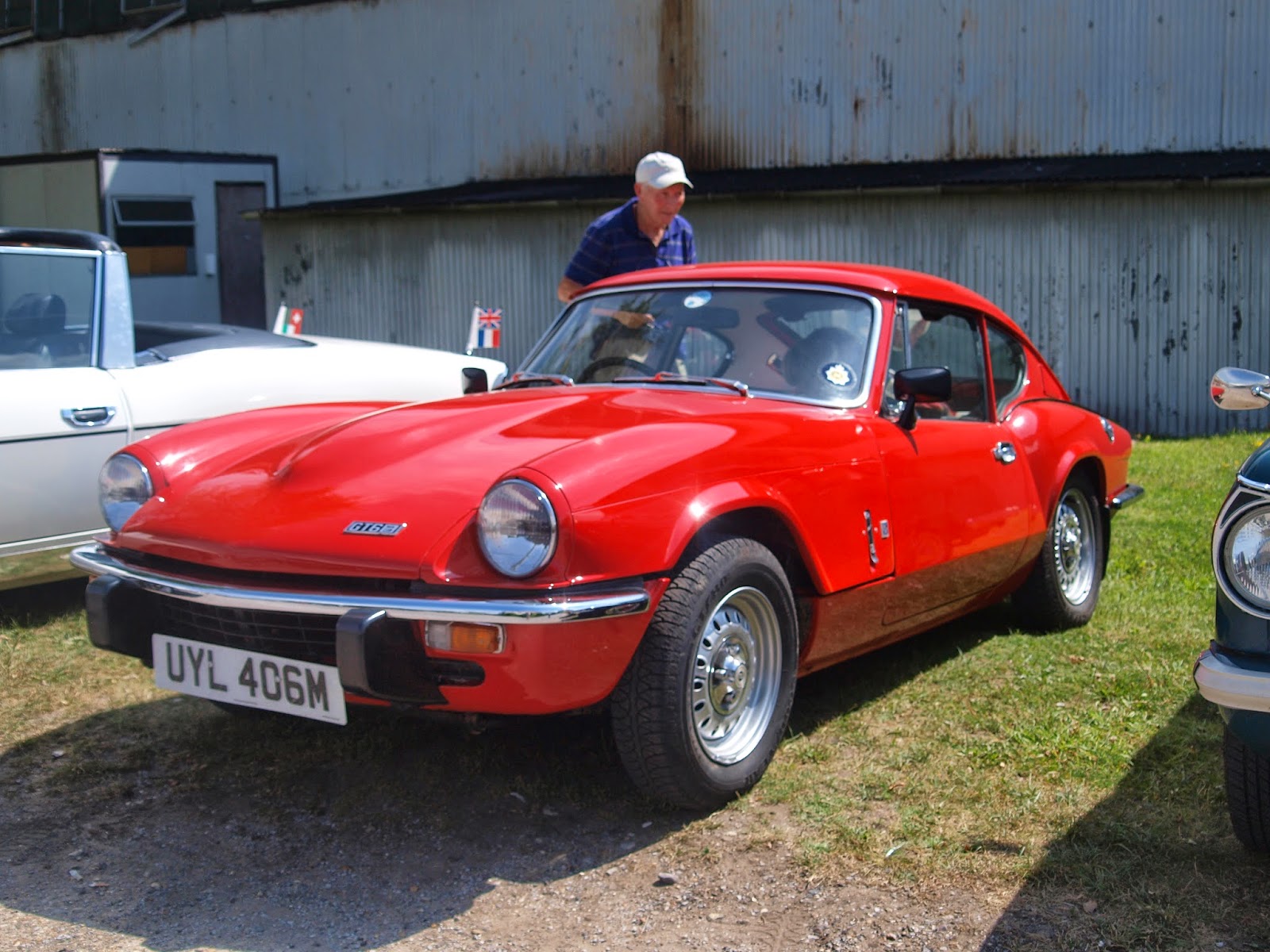 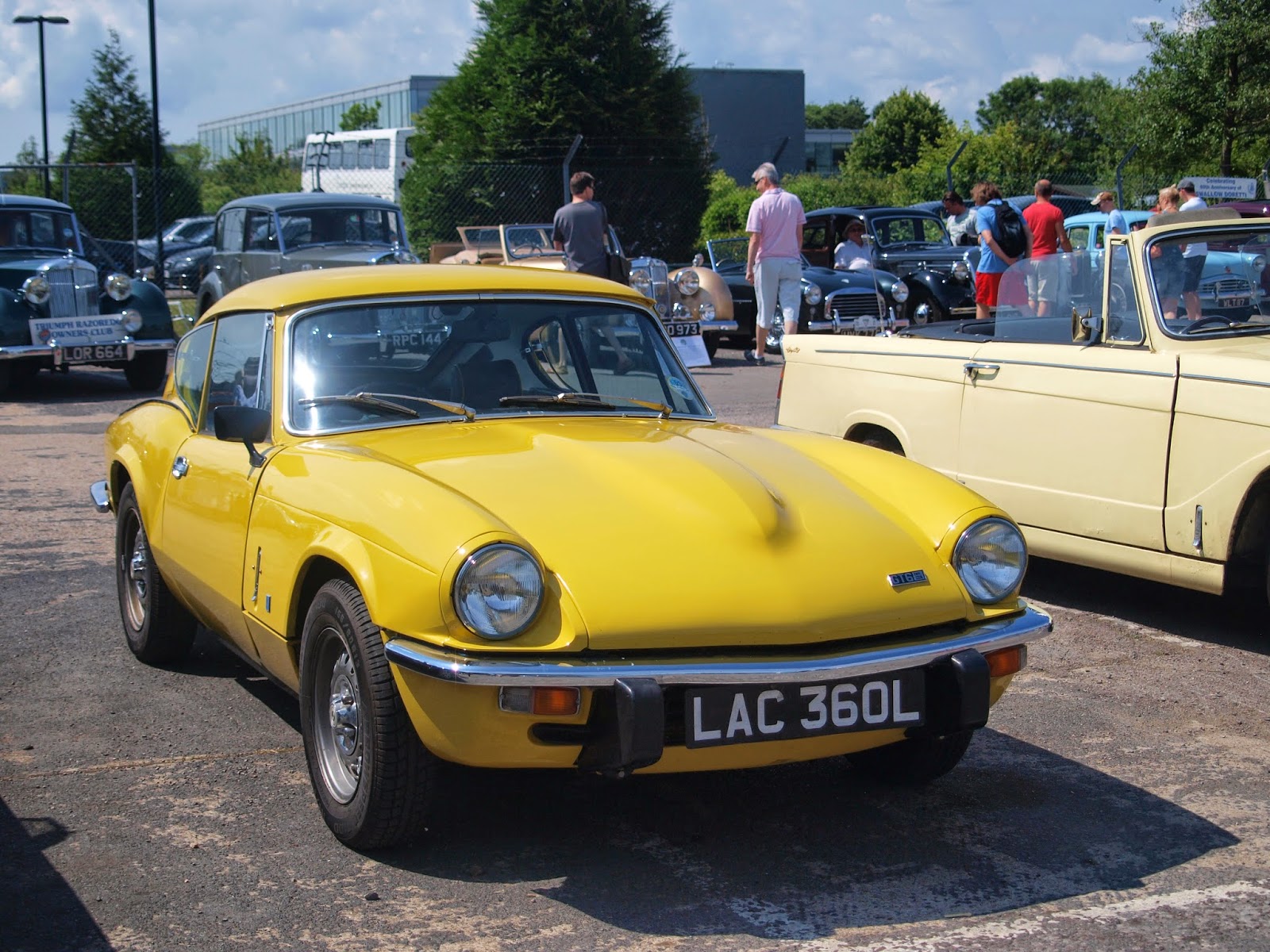 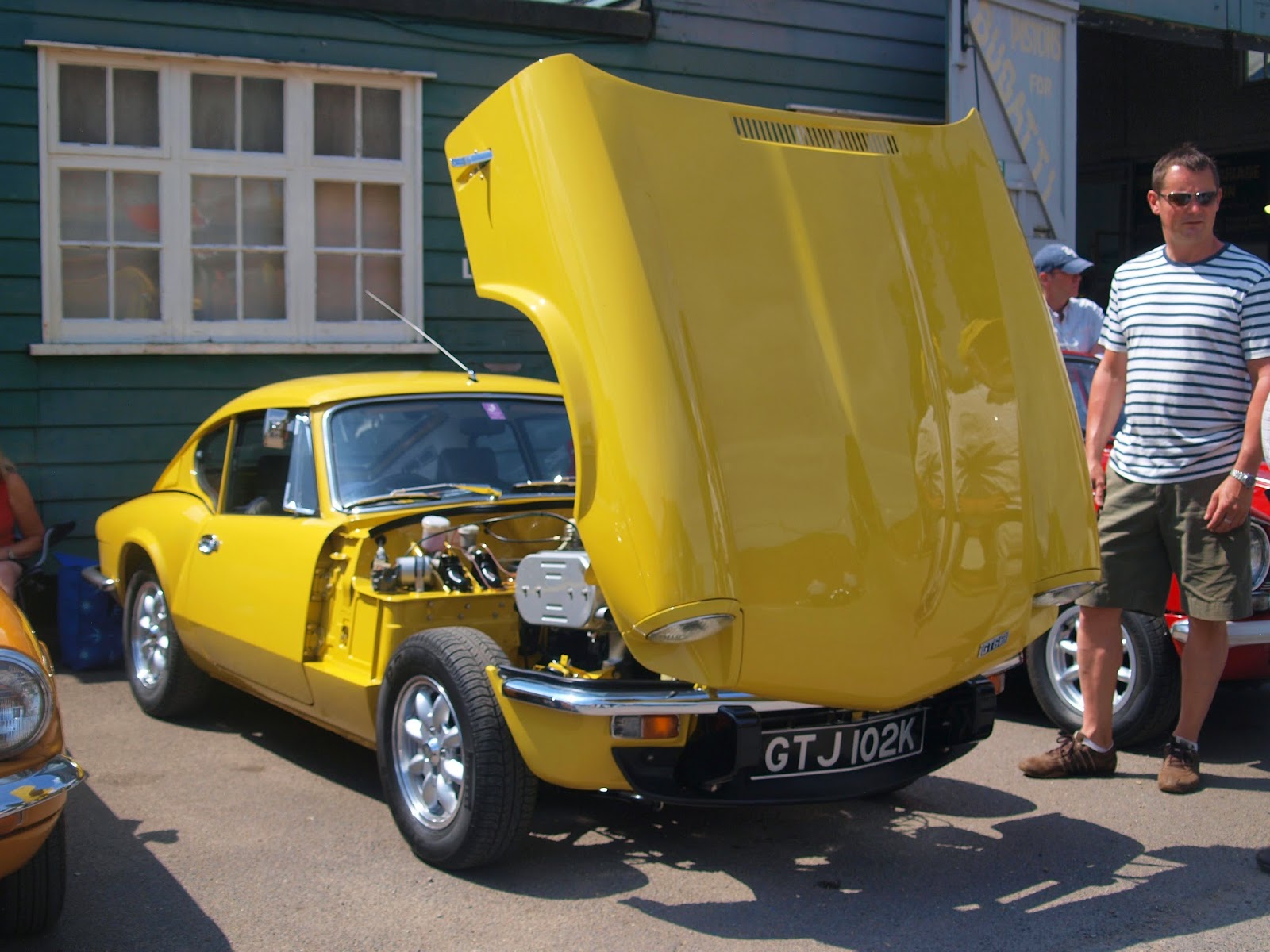 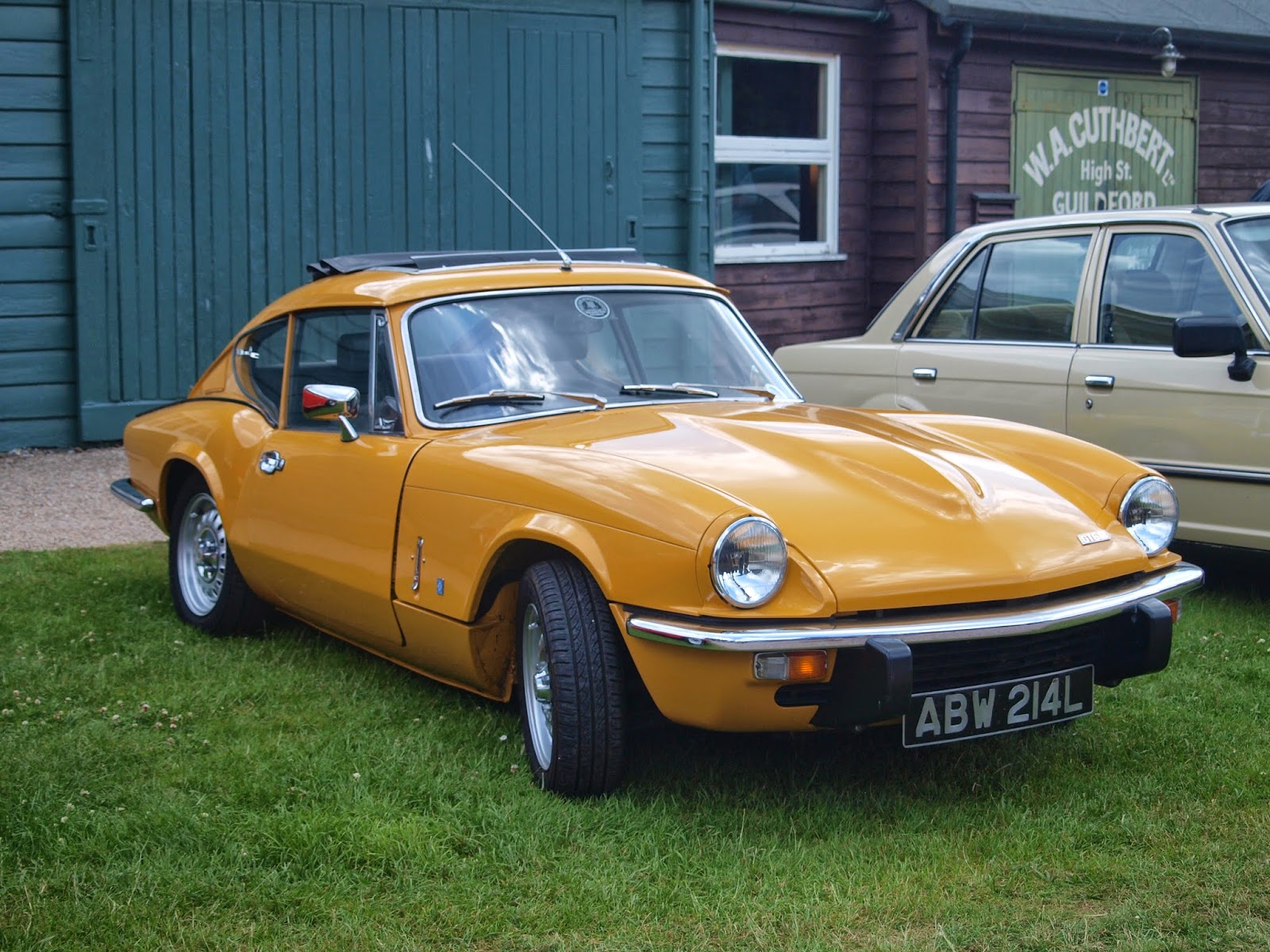 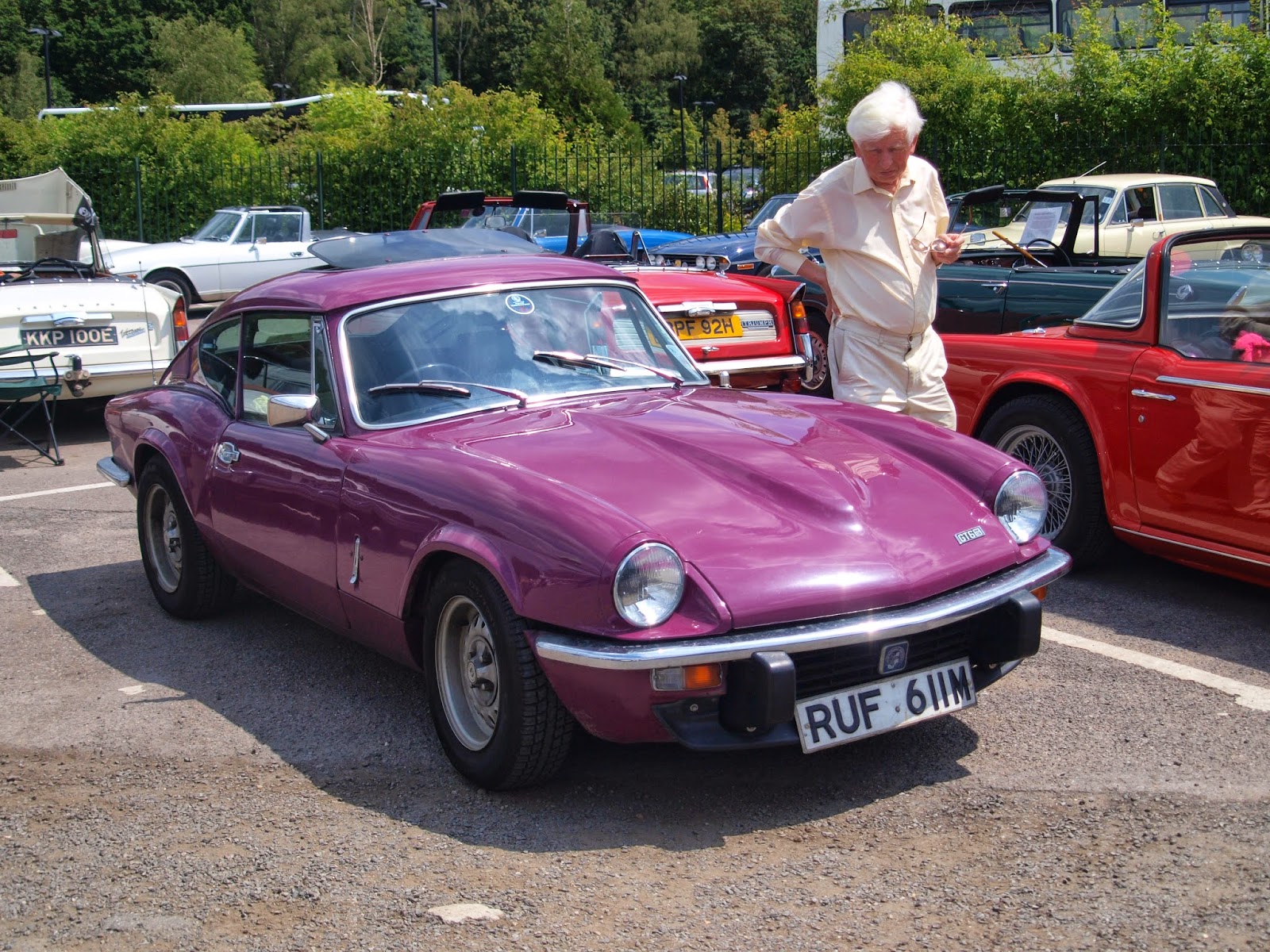 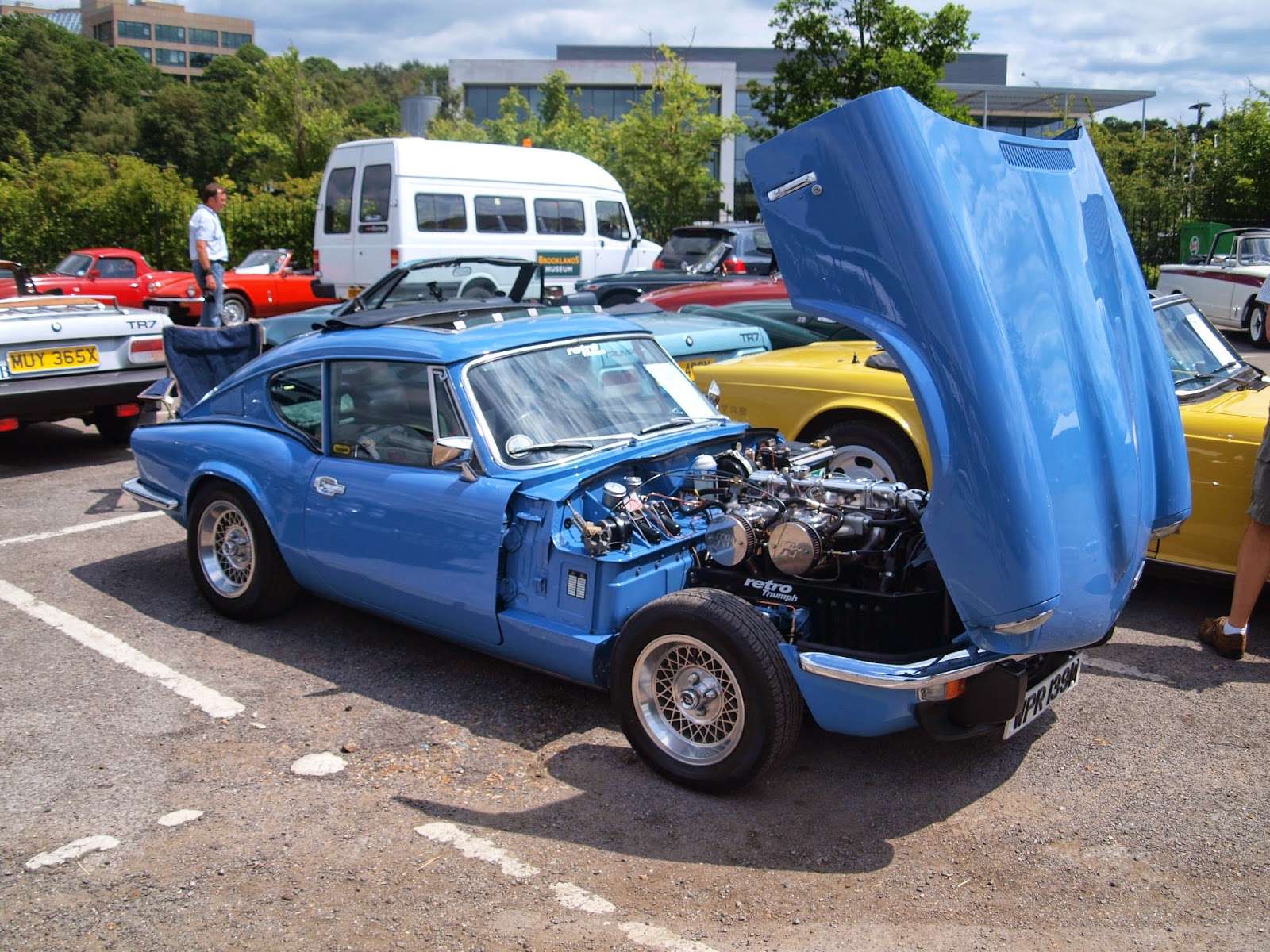 I also got a couple of nice "Nostalgic" Pictures of My GT6... 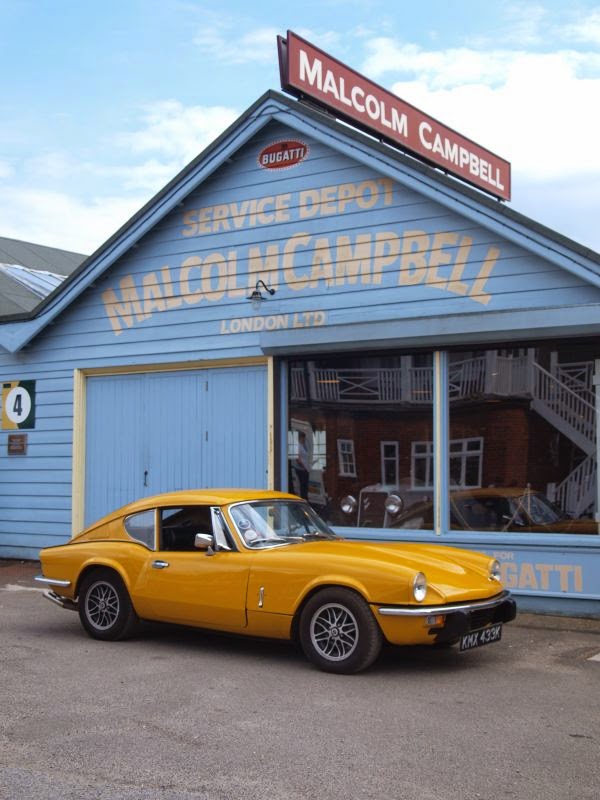 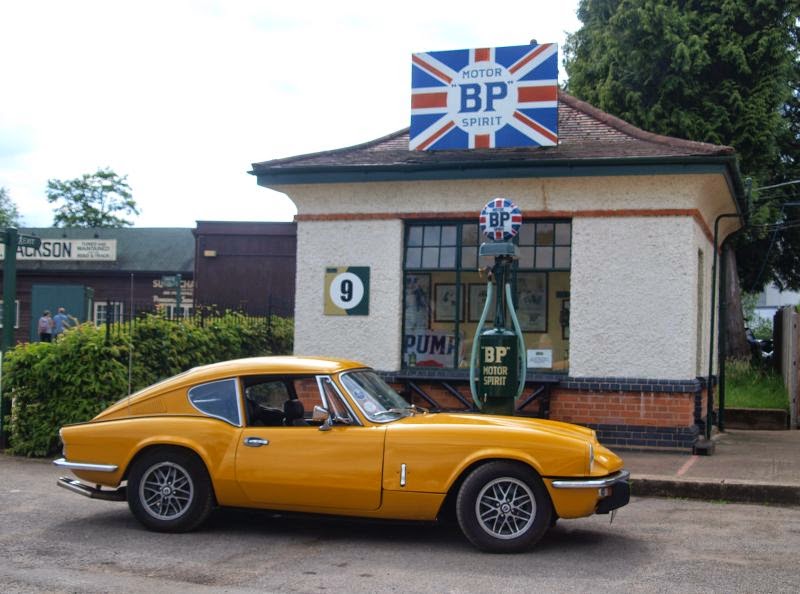 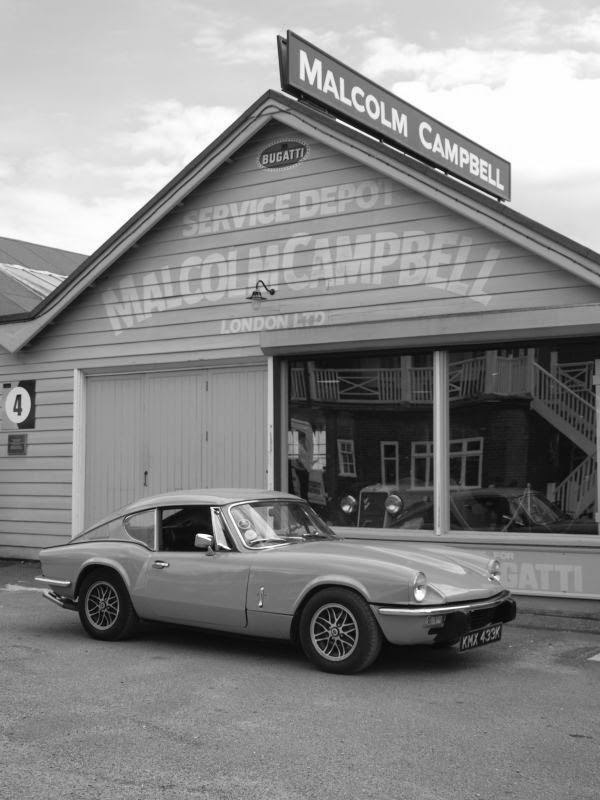 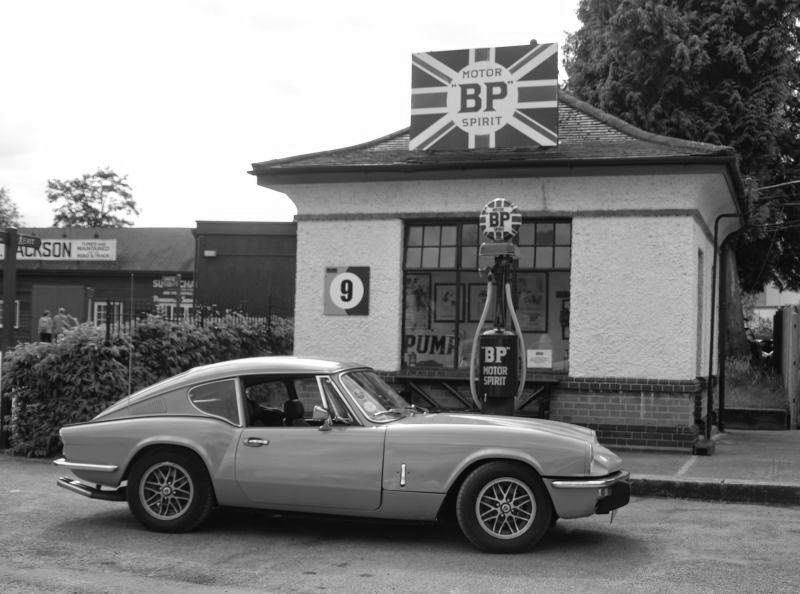 And then there was the excellent museum as well. That certainly entertained James with lots of Aircraft, Cars, Bikes, Aero and Car Engines, Missiles etc to look at. A great day out.
Posted by Andy Cook at 00:11 1 comment:

OK so I'm a lazy git, put the "Log" in for MOT yesterday and didn't bother checking it over first, that's the point of taking it to a place that does re-tests, use a test to get it checked and just fix the bits that need doing!

So the "Log" failed but to be honest it wasn't too bad, one binding rear brake and low efficiency on the handbrake on the other side.

Stripped don the binding brake to day and found it was due to the auto adjuster being seized and the handbrake lever springy thing catching, moving out of place and jamming which was preventing the handbrake from disengaging properly.

Cleaned it all up but am now waiting for a set of Brake Shoes to arrive as they are pretty worn and need replacing before the RBRR.

I'll then do the other side, there's only room in the garage to work on one side at a time on the Dolly unlike the GT6, it's almost like the Dolly is a "Big" car :-)