My Car is now a TV Star!

This has been really difficult to keep under wraps, but as some of you may have seen if you watch the programme, my GT6 appeared on Car SOS on Thursday night. 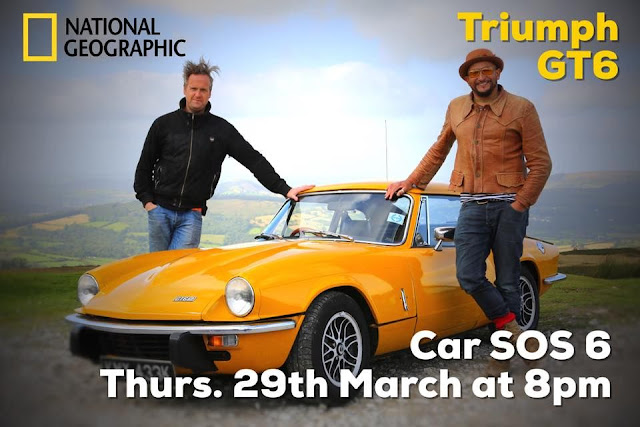 The filming took place last September and I was sworn to secrecy by the TV company and agreed not to publically mention my involvement in Car SOS or publish any pictures on line etc until after the programme had been screened.
Last summer I had an email from the production company – Renegade Pictures who make the Car SOS series for National Geographic. They contacted me asking if I knew anyone who had a GT6 that they could use for filming, they wanted a car to film as the example of a tidy roadworthy GT6 to film in an episode.  Snag was I couldn’t go asking out on facebook groups or internet forums etc as those who watch will know it would ruin the whole thing if the beneficiary of the restoration was to find out and the filming was to be in the Brecon Beacons. I couldn’t immediately think of a GT6 owner in South/Central Wales. As it was a 71 MK3 they would be restoring which is same year as mine I said they could use mine if they would pay expenses. So having agreed funding for an overnight stop in a Hotel, breakfast, petrol, and the Seven Bridge Toll I happily agreed.
It was a pretty long day as although it would only be a few minutes featured on the programme TV production is a long job and it took nearly 6 hours.
As well as the presenters Fuzz Townshend (The TSSC honorary president) and Tim Shaw driving the car with driving footage both in and outside the car I also drove some of the driving sequences, although that will not be apparent from the TV show.

Filming consisted of lots of driving around a twisty section of road high in the Brecon Beacons being filmed from the air by a drone and at ground level several camera men. Cameras were mounted for in car footage of Tim in the car with Fuzz as a passenger. Then there were some detail shots on the road with go pro cameras pointing at various bits of the car and road (which I drove for). There was some filming of the car stationary using a boom camera to focus in on the interior and exterior details. A few still pictures were taken as well to use as promotional material.


There was some stationary conversation with Fuzz and Tim including a comedy moment that unfortunately didn’t make the final cut, Tim is 6ft 9 tall and really had to squeeze to get into the driving seat. He also had to take his boots off to drive as his huge feet were too wide to operate the pedals except in socks! The boots were put in the passenger footwell, and when Fuzz got in he dumped them outside into the car park. Then the boots were filled with Quavers to attract a couple of local sheep to come and “eat“ them!

There were two other cars being filmed at the same time for other episodes. An MGA and a Lancia Delta Integrale.


At the end of the session the TV company gave me a “money can’t buy” Car SOS Key ring, like the ones Tim presents to the deserved recipient of the restored car in each programme when they say “You’ve been Cars SOS’d”.