Feeling good! Team Flying Log successfully completed the Round Britain Reliability Run on Sunday and our Sponsorship total for Guide Dogs is just short of £600. I am going to apply for a Sponsorship match from my employer Vodafone, if granted they will match the first £350 of money raised which will bring the total pretty close to the £1,000 that I gave us as a total.

Report on the Run

The car was prepared and ready to go on the Thursday night, then I got some bad news, Mark was not at all well and had been sick on Thursday evening. Come the morning of the run he still wasn’t well and his wife Sam and little boy Charlie were also going down with the “bug”. There was really no choice but for him to pull out of the team. This left Glynn and myself as a team of two, not ideal but doable, this would mean more driving, less sleep and having to do without a navigator at times when the other was sleeping.

Glynn came down by train and I met him in Reading where we had a slap up brunch breakfast in the local Weatherspoons before driving up to the start at Knebworth. When we arrived the first few cars were already there despite the place only having opened up about 10 minutes before. After our arrival other teams continued to arrive throughout the afternoon, it really was quite a sight with over 130 Triumphs lined up ready for the off.

As well as Glynn and me as drivers we also had some passengers, 3 cuddly Guide Dogs from the charity which we named Bill, Bill and Bill, in memory of our old American friend Bill Goodwin who passed away last year. Bill regularly came over from the US and drove in the run, he even kept a Triumph in the UK for such events, a real enthusiast and character who is missed. As is Carol Boyland another old friend who was a regular at Club events and as per last time we had one of her teddy’s that Glynn’s wife Anne Marie won in an auction for Macmillan Cancer after her passing. Naturally the bear is now christened Carol Bear and is a regular on our team!

Only problem with being among the first cars there, it meant we were amongst the last to set off, however by about 6:15 we were on our way Northwards, reaching the 1st control point at Blythe Services near Doncaster with no dramas or hold ups and arrived a few minutes too early for the control to be open to get our book signed, but this meant we were well on track.
After leaving Blythe and heading Northwards we had an issue with the exhaust, the manifold to downpipe gasket started to blow, However in the interest of time, the fact it was dark and because it would have been too hot to fix we drove on with it getting increasingly louder eventually sounding like a tank!
The route along the A1M had a road closure that evening but we planned a shorter route than the official diversion which worked well along the A167 and through Darlington.
Next control point at Carter Bar, the Scottish Border point on the A68, was reached bang on time.
We then drove down towards Edinburgh managing to negotiate the many speed cameras without getting flashed on this stretch of road. Then it was over the Forth Road Bridge and up to Kinross Services on the M9 for the next Control which we reached at around 1:50 am.
The next stretch from Kinross to Inverness was across the highlands on the A9, this road has about 100 miles of average speed cameras, so the Sat Nav speed camera function on the Tom Tom was used to good effect.
Next control point was Skiach Services North of Inverness reached at around 5am still in darkness.

Then it was up the Scottish East Coast all the way to John O’Groats for a hearty full Scottish breakfast with the other teams in the Sea View Hotel. By now it was daylight so after Breakfast I checked out our blowing exhaust. It would have been a longish job to change the gasket even though I had a spare in the boot. However as most of the original gasket had been burnt away I tightened up the flange joint metal on metal without a gasket which seemed to do the trick and stop the blowing exhaust. For the rest of the trip I kept re-tightening every couple of control stops which got us around the run with no issue. We left the breakfast stop and headed down to the first and last house for the obligatory signpost photo with the car.

Then came the most impressive part of the run, down through the centre of the Northern most part of Scotland. Many of the roads up here are single track with passing places (even the A Roads) and apart from the other Triumphs the only other users of the road were the sheep for a good 100 miles!

The next control stop was a return to Skiach Services, this time in the daylight.

This was followed by another long and picturesque drive along the side of Loch Ness, down through Fort William, Glen Coe and the Trussochs to Stirling. 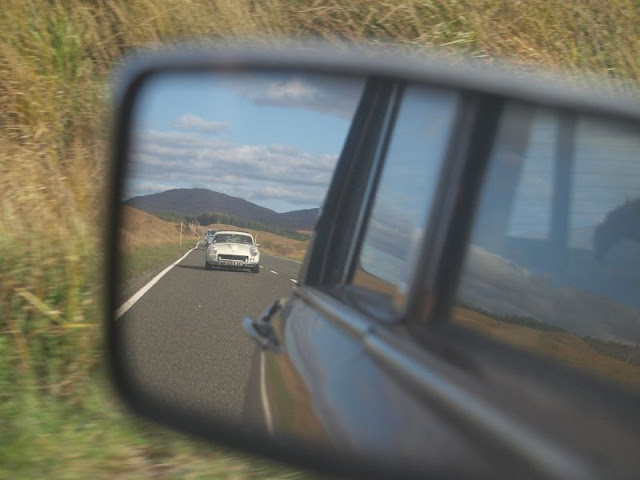 At Stirling the Control point is Morrisons Garage, who were a Triumph Dealership back in the day. The Garage has traditionally supported the Round Britain Run over the years and provide the entrants with Scotch Pies and hot drinks.

After Morrissons Garage at Stirling the next stretch was nearly all Motorway, down through Scotland to the Borders and into the Lake District. A Short stretch of the run left the motorway to follow the original route from the first run in 1966 along the A6 in celebration of the 50th anniversary.

Then it was down the M6 and across on the A56 to Chester and down into Wales, with a quick detour off the motorway to avoid a jam where a caravan had turned over on it’s side. Next control was Gledrid Services at Oswestry. We did have a little mishap there when Glynn drove the car into a un seen kerb head on. Fortunately the damage to the subframe and sump from this altercation is pretty minor so didn’t cause an issue.

After Gledrid it was down through Wales through some very twisty and challenging roads in total darkness, good job the Flying Log has some uprated headlights! The next control in Wales was a Picnic Area at Sugar Loaf near Landovery, in total darkness. After this it was along the A40 to Monmouth.

The planned route from Monmouth was along the River Wye, a nice road but unfortunately there was a road closure part way along and we had missed the diversion. We used the Sat Nav to find a way around, it was a worrying few miles though as the Sat Nav took us through some very narrow roads that were not much more than a track through the Forest of Dean. Anyway eventually we got through to the Severn Bridge and back into England down to the next control at Westonzoyland airfield in Somerset where a burger van had been commissioned to provide Bacon Rolls and Hot drinks, just what we needed at 3:30 in the morning to keep us going!

We then went on down the M5 and A30 into Devon to the next control near Oakhampton at around 5am.
Then it was on down through Cornwall to Lands End control for another full English Breakfast laid on for the crews.


After Badgers Holt we drove along the South coast and then up to Pimperne near Salisbury. The checkpoint at Pimperne is one of the highlights for the crews as the local car club lays on a fine selection of homemade cakes every year.

After Pimperne we were away on the final stretch, Glynn was driving, I was supposed to be navigating but nodded off resulting on Glynn missing the A34 turnoff on the A303. All was not lost though as I used my local knowledge and got Glynn to take the A33 up from Basingstoke, cutting out a lot of miles and getting us back on track.

The M4, M40 and M25 were better than expected on a Sunday evening and we arrived at the Knebworth finish at 18:50, just under 48 ½ hours after leaving.

After finishing there was a meal laid on for the drivers and time for a quick beer before heading to a nearby hotel for a much needed shower and a few beers in the bar with some of the other teams. Another great Round Britain Run, successfully done, next one will be in 2018 and I’m already looking forward to it.
Here are some Stats for our team
Distance covered from Start to Finish 2137 miles
Average MPG between fill ups before start and after finish 32.29
Best MPG 36 between Skiach and Stirling
Worst MPG 29 between Salisbury and the finish
Amount spent of fuel £375
Most expensive fuel £1.33 per litre at on the A1M at Whetherby and on the A40 between Abagaveny and Monmouth
Cheapest Fuel £1.12 per litre at Wick and Stirling
Time in hours from start to finish approx 48.5 (assumes we got out of the car park at about 6:15)
Approx average speed including stops 44 MPH
Amount raised for Guide Dogs so far £595

The final figure for the amount raised for Guide Dogs will be revealed at the Club’s annual Dinner in March where a giant cheque will be traditionally presented to the Charity. I did notice tonight that the total for the event on Just Giving is over £58,000 so far for this years event, this is bound to rise as more donations come in, I wouldn’t be surprised if it tops £70,000, a significant donation to Guide Dogs. To put it into perspective apparently it costs around £50,000 to train and provide a Guide Dog so there should be one with Club Triumph’s name on it!