Isle of Wight and SEM

Two Triumph Weekends away, one excellent, the other one didn’t end too well!

May Day Bank Holiday Weekend was the Isle of Wight Triumph Club Camping Weekend. As usual this was a great weekend away, even better this year due to “scorchio” weather on the Sunday and Monday. Due to having both Kids I had to travel over in the modern, however me and the kids managed to blag lifts on the various convoys out so thanks go to Darren, Alan, Becky and carl for making seats available and putting up with Cookies as passengers. Both Kids rather liked the Triumph Saloon’s they travelled in (Darren’s 2500S and Carl’s Sprint) and they want me to get a Dolomite now so I can have a 4 seater  Triumph  and take them both away Triumph Style. I just may have to look at this if funds allow in the future, it will be like going back to the past as my first Triumph was a Dolly 1850. 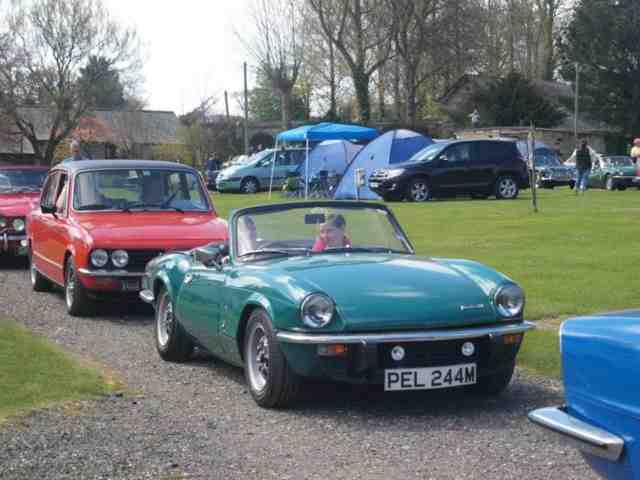 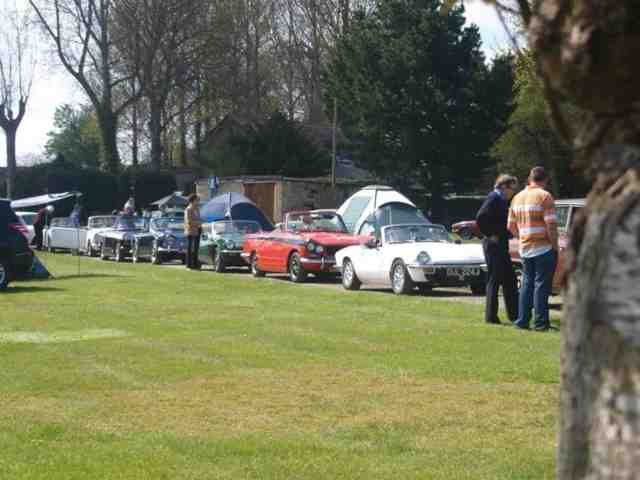 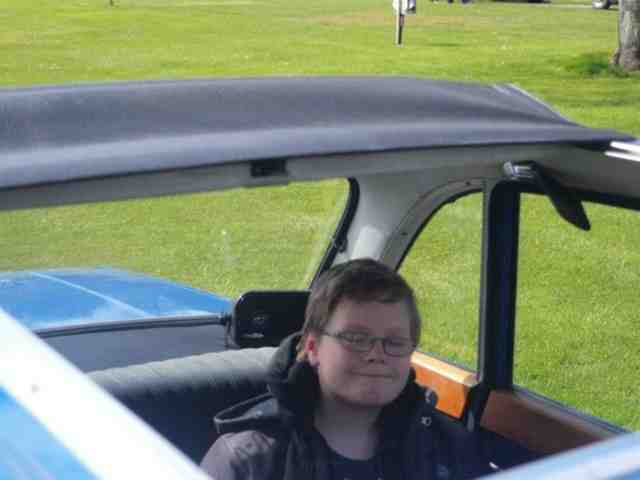 On the Saturday we had a convoy out to the needles. I particularly enjoyed going up to the Needles Battery where British Rocket s and Missiles used to be tested in the 60s and 70s, a bit of a climb but well worth it.Saturday night saw a brilliant local band performing in the clubhouse called Lucid. Their finale was a violin based version of Pink Floyd’s comfortably numb may sound a strange concept but it was absolutely brilliant.

Sunday saw a Convoy out to Calborne Mill, now a regular annual trip. The convoy got a bit split up and the cars in front got lost. Darren drove straight there and we arrived before the main convoy so had prime parking spot next to the pond at the mill. On Sunday Evening was the quiz which our area always seem to do well in, this year was no exception and we were winners once again. Then on Monday it was off to the Wight Mouse for some excellent scoff. 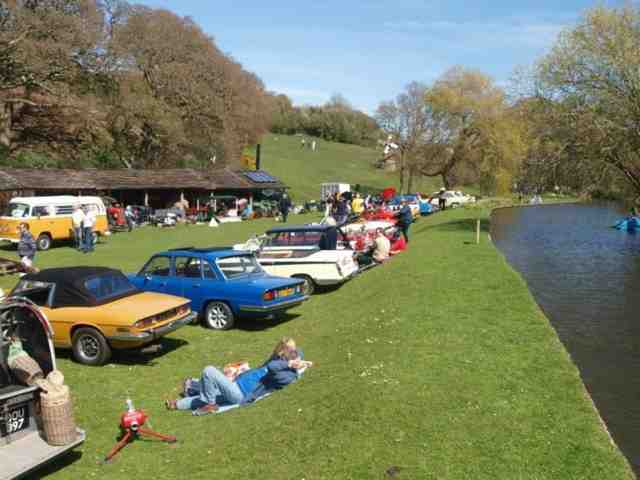 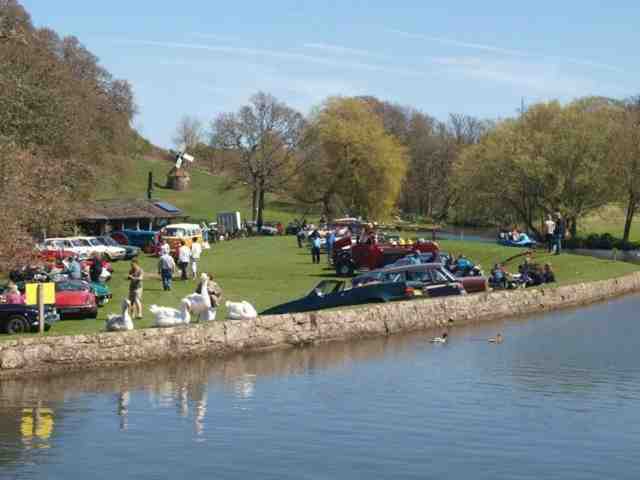 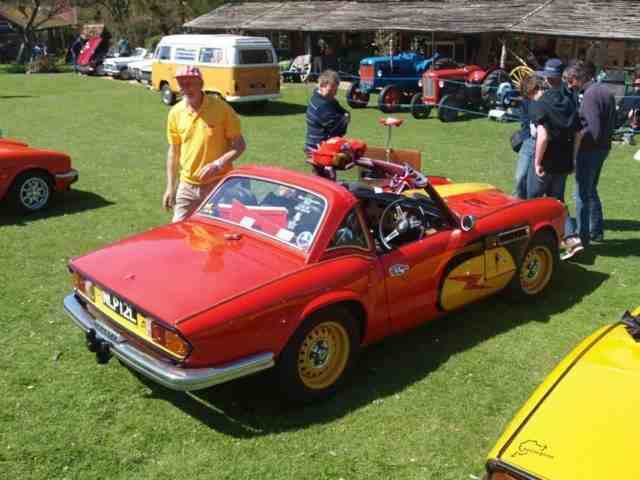 Red Funnel managed to screw up our ferry crossing somewhat on the Monday, even though we arrived in plenty of time, our car and about 30 others failed to get onto the ferry we were booked on. They did however give me a 50% off another ferry booking as a goodwill gesture so I’ve purchased a ticket to be used by the ex missus and Kids when they go to the Island in August which should earn me some brownie points.

The following weekend was the SEM (South of England Meet) Triumph Show at Leatherhead. It was a bit quiet on the Saturday and ended up rather wet, fortunately this was after I’d managed to get the tent up. As I was on my own without the kids this year Saturday night was a boys night out to the Wetherspoons and then the Duke  pub which had a band on until 1amfollowed by the essential Kebab on the way back to the campsite. Haven’t had a boys night out at SEM for many years and enjoyed this a lot although the head was a bit sore in the morning.

The GT6 wasn’t running too well on the way to Leatherhead, felt like a fuel starvation issue and on Sunday it wouldn’t start. Cleaned out the fuel filter, Fuel pump and carb float chambers of sediment and borrowed a battery off James Cooper to get it fired up as I had flattened mine. It was running like a pig. Adjusted the timing and it seemed way out which was strange as it had only been set a couple of weeks ago. Anyway it wouldn’t start again. Tried changing the rotor arm and dizzy cap as they looked suspect but still no good. There was a mobile tuning company as part of the show so got them to have a look. Had a strong spark, fuel was getting through to the carbs but there  seemed to be an issue with a pressurised crankcase and pressure rather than vacuum in the inlets which is all a bit strange. Had the rocker cover off, turned over the engine noting TDC for various cylinders and the valve timing seems ok (we were worried the timing chain may have slipped. Anyway the mobile tuners couldn’t get it going, neither could the AA recovery chappie who was an ex owner of a Triumph 2000 Saloon which he had changed to a 2.5 with a TR6 head, hot cam and flowed exhaust so he did know his way around a Triumph 6 pot. Anyway got it towed back. A few people have suggested it may be a blocked exhaust  so I’ll be dropping the exhaust system off the car and trying to start unsilenced as a test. 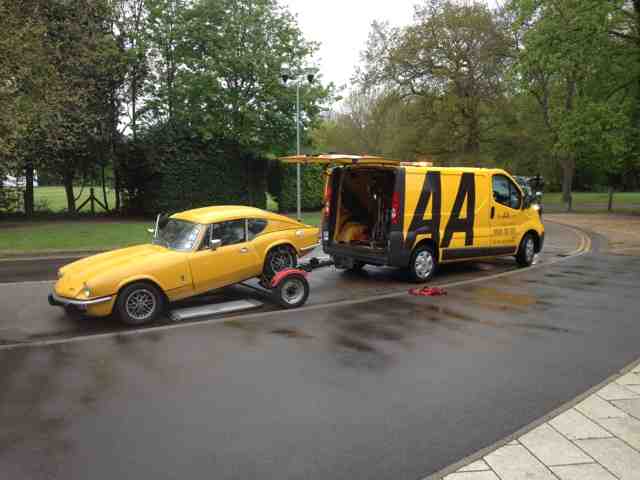