You should always check the simple stuff first!

Those of you who frequent the Club Triunmph Forum may have read some recent posts of mine regarding an annoying squeak that seems to be coming from the drivetrain or suspension on the GT6.

Having checked the car out pretty throughly including wheel bearings, brakes, driveshafts, propshaft, front and rear suspension I wasn't too worried as although I couldn't find the issue it didn't seem to be serious, more annoying.

That was until last week when on the way back from the local Club Triumph Surrey area meeting the car was exhibiting some handling problems at speed where the back end started to weave at about 70 mph ish.

I immediatly thought, that'll be whatever was squeaking and the following evening started to strip down the rear suspension thinking maybe it was a rear shock or a problem with the spring.

Anyway stripped down one side and found no issues, went to strip down the other side and straight away it became apparent that the rear offside tyre was somewhat soft. Checked the pressure and it was down to 7 psi... That'll be the weaving issue then, why the heck didn't I check the tyre pressures before strting to strip down the suspension!  Lesson learnt me thinks!

Anyway, I took the opportuinity to replace the bushes on the rear shocks as they were looking past thier best. I have one of the Moss rear suspension conversion kits that moves the shock mount away from the wheelarch and onto the chassis as below.

Although this is superiror to the original mounting point in the wheelarch there are two issues with this set up.  Firstly the shock sits at a slight angle fore and aft which is not good for the rubber bushes as they are constantly deformed. Secondl;y and I can only think it's to save money, instead of using a shouldered bolt like on the non-rotoflex cars Moss supply a normal bolt and a sleeve whcih goes right through the bracket. Difficult to explain but in order to remove the shock top mount or the bracket you have to struggle to get the sleeves out as well as the bolt. Very difficult once things have started to corrode or sieze into place

Having struggled to get the sleeves out I not only replaced the bushes but also chnaged the mountinmg bolts for the shouldered type as it  should make removing the shocks in future loads easier. 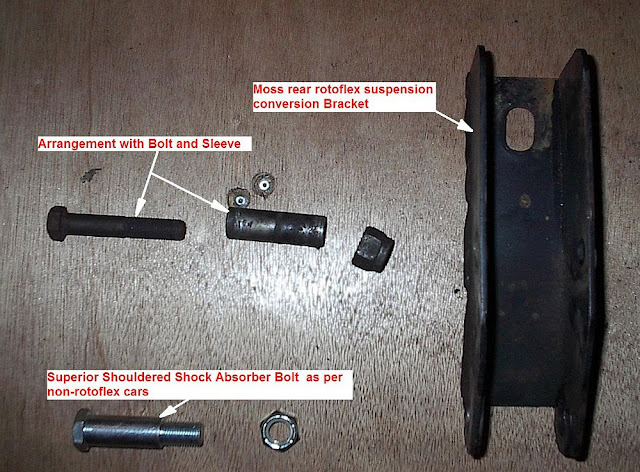