So Team 67, Andy Cook, Mark Smith and Glynn Davis successfully completed the Club Triumph Round Britain Reliability Run yesterday (Sunday 3rd October) having driven c2,000 miles around the British mainland in 48 hours using Mark’s 1970 Triumph Vitesse Saloon. As part of the charity sponsorship for the run as of 14th October we have raised £1259 for the Motor Neurone Disease Association, so a big thank you to everyone who has generously donated. If you haven’t donated already but would like to do so it’s not too late. https://www.justgiving.com/fundraising/Mark-Smith-RBRR2021

The total raised for MDNA as of 14th October by all the teams taking part stands at £92,025and the money is still rolling in so a spectacular amount raised for the charity.

Even getting to the start of the event was not without its challenges.

Then when Mark took the car out on a test run after coming out of isolation it started running on 3 cylinders, on investigation Mark found that one of the inlet valves was stuck open. Mark had recently rebuilt the cylinder head replacing all the valve guides and some of the valves, I suspect that the offending valve hadn’t bedded in properly. However Mark tapped it with a hammer and it freed up. We were not sure if the fault would come back so we drove the car very gently to the start and for the first day of the event.

Then of course there was the worry of whether we would be able to get the fuel we needed all the way around. Ideally the Vitesse shouldn’t use E10 but as this was all we could get at some locations we took a chance on using standard unleaded with the dreaded 10% Ethanol. We managed to fill up a couple of 5L petrol cans and a large 20L Gerry can as well just in case. In fact 5 miles away from the start in Knebworth we brimmed the tank and filled up the Gerry can out of sight within the boot at a fuel station that had a reasonable queue of about 15 mins. Officially it was no can filling allowed so we were discrete when we filled it.

I’ve quoted approximate miles for each section based on the route we took which diverted from the recommended route a few times, which is allowed as the route is only a recommendation rather than mandatory as long as all the control points are visited. Also the mileages are approximate worked out from Google Maps as the odometer in the Vitesse under reads by quite a bit so can’t really be used as an accurate measure.

The start and Finish was at Knebworth House in Stevenage, it was a great sight with around 120 Triumphs lined up ready to go, signing on was from 2pm and the start was at 6pm. 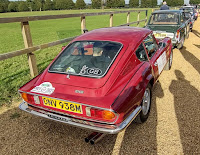 The first control point was Wetherby Services on the A1M, distance was about 167 miles. As we were still wary of the sticky valve issue we took it slowly, cruising at 60mph and as its a dual carriageway route we were overtaken by most of the entrants but still managed to get to the control point well before it closed. We refuelled the car before Wetherby at Blythe Services, the cost of normal E10 Unleaded was ridiculous there at £1.58.9 per litre, ouch!

Carter Bar control point is on the English/Scottish border in a layby on the A68 and was unmanned. Club Triumph were using the RallyAppLive app on a smartphone for each team to track the check in at the control point, In fact the app was being used as a trial for the whole run although getting your road book signed by Marshalls was required at all other control points.

Distance from Wetherby to Carter Bar was about 121 miles and arrival time was approximately midnight.

After Carter Bar, we refuelled at the next Fuel station, the 24 hour Shell Garage on the A68 in Jedburgh.

After leaving Jedburgh we continued along the A68 to Edinburgh and then over the Forth Road Bridge on the M90 up to Kinross Services for the 3rd control point. Distance from Carter Bar to Jedburgh was about 89 miles.

The 4th control point is one that has been used in many previous RBRRs, Skiach Services in Allness north of Inverness.

After going North from Kinross to Perth we picked up the A9 through the highlands up to Inverness, a long and isolated run with many average speed cameras keeping the Speed down to 60mph. We continued on the A9 northwards from Inverness over the Moray and Cromarty Firths to Skiach services a distance of 146 miles. Skiach actually had E5 Super unleaded fuel which is few and far between in the North of Scotland.

From Skiach it was North up the East Coast of Scotland to John O’Groats for Breakfast at the Seaview Hotel and a quick photo opportunity at the famous John O’Groats signpost. The journey up the A9 and A99 coast roads saw the sun come up with stunning dawn views. Distance from Skiach to John O’Groats was about 101 miles.

Breakfast at the Seaview Hotel in previous years was well organised but this year the queues were big and it took a while. To be fair the main reason for this was the Covid Restrictions which had severely limited the number of seats and tables to space people out. It was really noticeable how far behind Scotland is from the rest of the UK in easing the restrictions from the Pandemic, masks were compulsory by law everywhere as well. 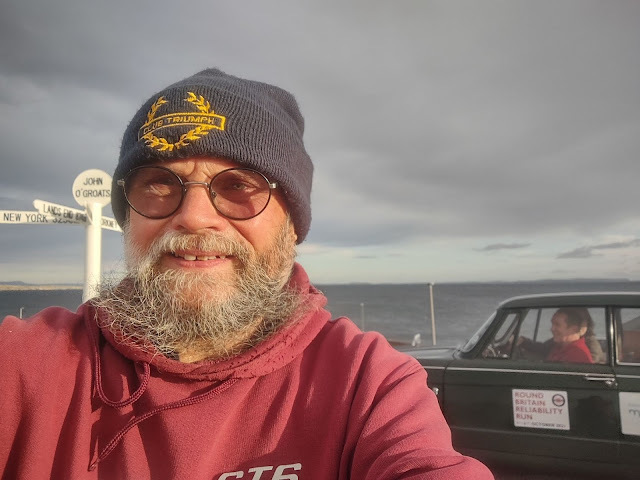 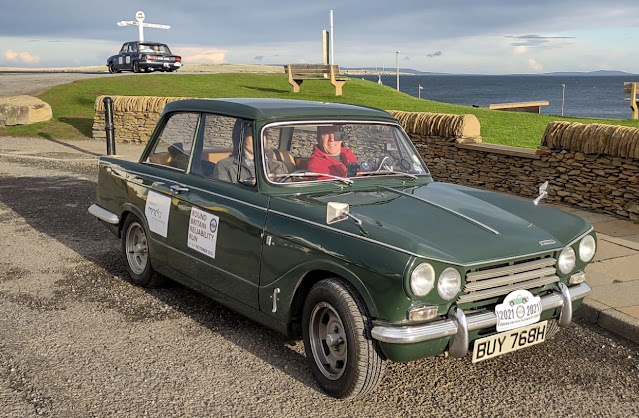 The Falls of Shin was a new Control point for this year. The journey there is through some of the most spectacular scenery along the North Coast of Scotland on the a A836 to Tongue then down through the Centre of the North also along the A836 to Lairg and then the Falls of Shin

The distance was about 104 miles but as much of the A836 is single track road with passing places it is nearly a 3 hour journey.

The next stint was the longest in distance on the run and finished up at the control point in a Social Club near Glasgow that looked rather rough and a bit like the club in Phoenix Nights!

The Run went back past Skiach Services, then down to inverness and along Loch Ness via Fort Augustus to Fort William and Through Glen Coe, then over to Stirling and down the motorways to Gartcosh. During this part of the run the weather got considerably worse and wet!

Next we drove South on the M73 crossed the border near Gretna Green and then along M6 to Tebay Services in the Lake District. This was extremely hard going as the rain was torrential. Distance was around 127 miles. At least the Wild Boar Sausage Roll I ate there was nice though!

The next Control Pont was close to the Welsh Border at Gledrid Services, Chirk. By the time we got there the rain had at last stopped. Distance was around 130 miles.

After Leaving Gledrid we drove through Wales via Welshpool, Newtown, Llandrindod Wells, Bullith Wells and Abergavenny. This is an extremely twisty and fun drive, pitch black darkness although if it was daylight the scenery would be stunning. The climb up to Bullith Wells was significant.

The control point was at Monmouth North Services on the A40 and was a trip of around 111 miles.

We left Monmouth Services and travelled over the Severn Bridge back into England. By then the rain was again torrential. The drive went down the M5 past Exeter then along the A30.

Whitehouse Services had run out of fuel but we found a services just before on the A30 to fill up.

The distance of this section was around 139 miles

The traditional Breakfast stop was at Lands end as usual. From Whitehouse services the journey was 98 miles along the A30. By the time we got there the rain had stopped at last. Breakfast at Lands End has been a bit disorganised in previous years but the Lands End Hotel had really upped their game, the food and service was great this time around.

The next Checkpoint was back up the Northern Cornish Coast at Bude Castle Museum, a distance of around 85 miles. We deviated a bit from the recommended route and went via Bodmin which for me was significant as it’s where my maternal ancestors lived. We again went through some torrential rain on the way.

Although the RBRR is not a race I am pleased to say we were the first car to reach the control point, arriving over an hour early which gave plenty of time for a cup of tea!

We then went south down to Dartmoor, across the moor to Badgers Holt Dartmeet.  Again we deviated slightly from the recommended route as we followed the satnav and covered around 51 miles.

The next control point was another new one from this year at the Haynes Motor Museum in Sparkford. A number of our Triumph friends had turned out there to cheers us on which was nice.

Distance covered was around 78 miles.

The journey back to Knebworth took a route which in normal times would have been full of traffic jams, however, with the fuel crisis there were a lot less cars on the road and the trip was really good. We travelled up the A303, onto the M3, then around the M25, A414 and A1M to Knebworth, a distance of around 142 Miles.

We arrived back in good time just after 6pm, pretty much bang on 48 hours after leaving. After the final control check in and some pictures it was over to the local premier Inn in Stevenage for a Shower, beers and a meal before some well-earned sleep. A very successful RBRR for team 67.